For the past five years, I have relied on Roku to watch streaming content. Although it is a fantastic box with excellent support, I was always a little bothered by its lack of flexibility. This is especially true when it came to watching content via USB. Over the course of five years, a lot has changed as competitors like Amazon, Google and others have produced streaming devices of their own.

While the options may be limited in the United States, little known brands outside of the U.S. are producing inexpensive and powerful streaming and mobile devices. That's why when I was approached to review Zidoo's latest media box, the 'X1', I was excited. The 'X1' is an Android powered media box that touts its ability to support 4K. The box is also unique in that Zidoo claims that it has a number of customized and optimized software. But, the real tipping point for the device is its $59 USD price tag. Can the X1 live up to its self promoted expectations? Let's find out. 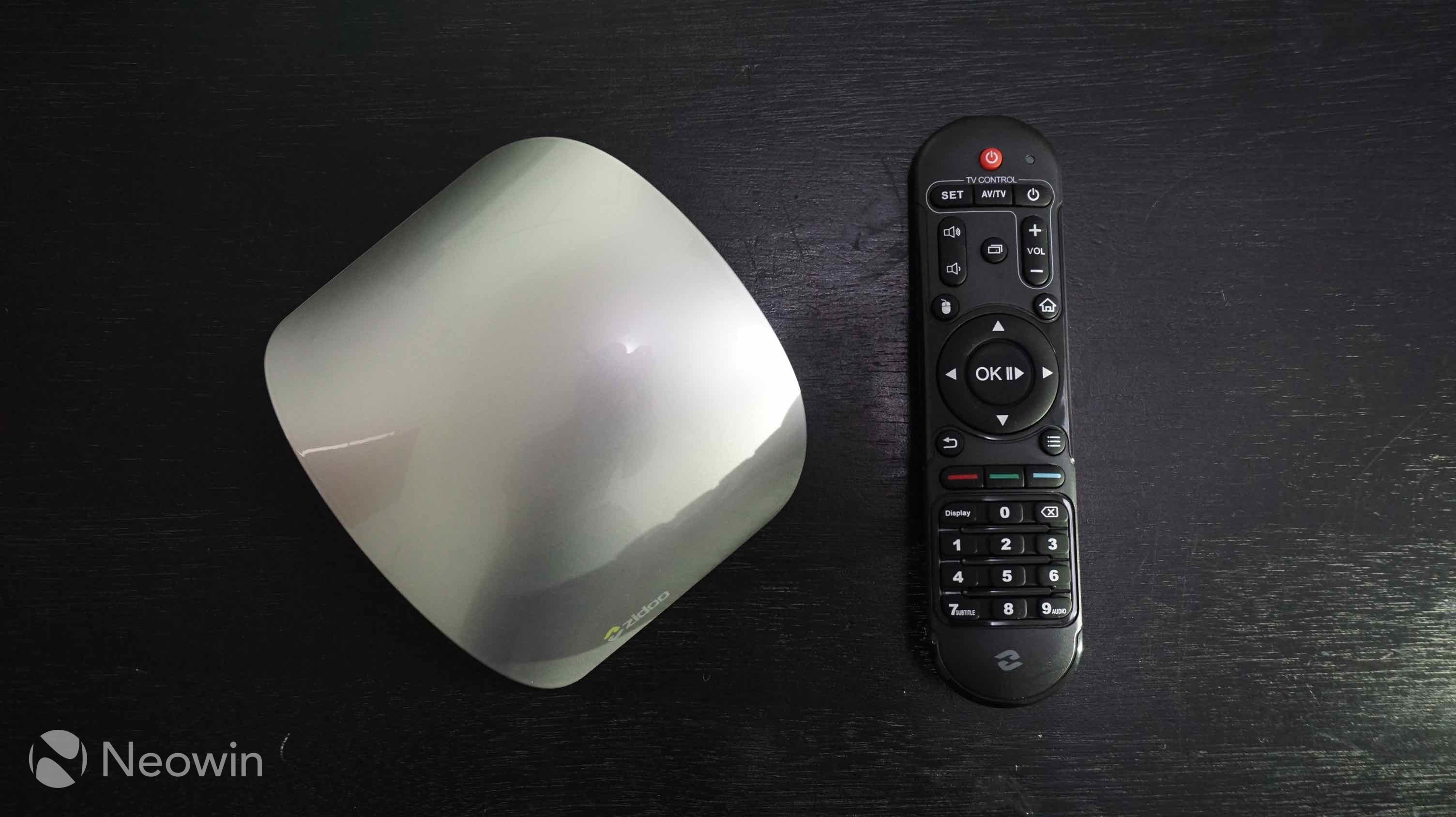 The X1 measures in at 179mm x 144mm x 86mm and is made from a glossy plastic. The design of the X1 deviates heavily from the traditional square box design you find on most set-top or streaming boxes. Instead, it has a curved design that is reminiscent of a curved warehouse or airplane hangar. Although it has a unique shape, it isn't gaudy and manages to maintain a minimalistic appeal. 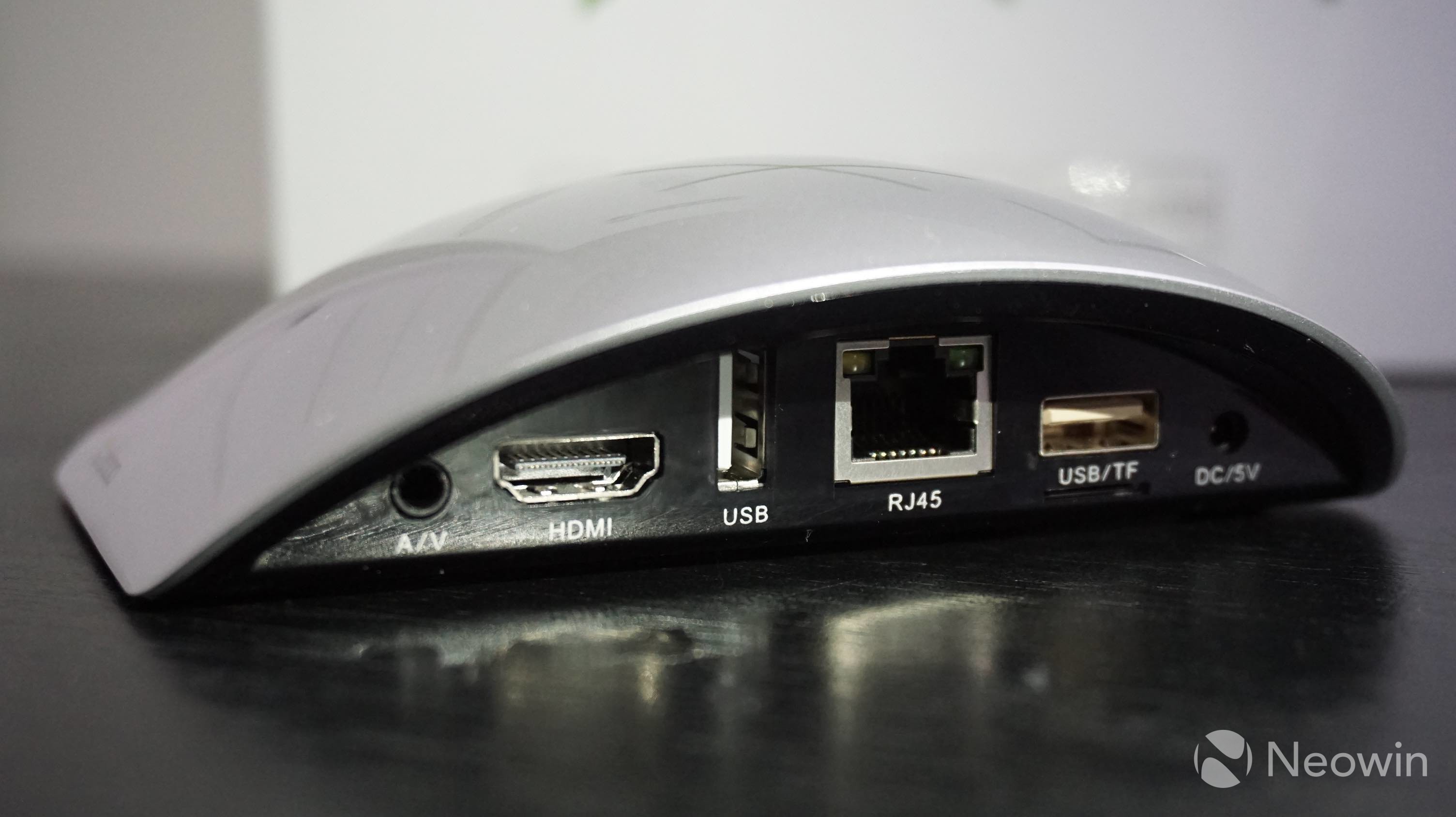 The front of the device is devoid of any buttons or inputs, as those can be found on the rear of the device. On the rear from left to right, the X1 has an A/V port, HDMI, USB, Ethernet, USB, microSD slot and power jack. Included inside the box are the manual, warranty card, AC adapter, HDMI cable and remote. The remote is fairly basic offering the ability to be programmed for you TV. The remote also offers volume toggles, a directional pad, home button, back, menu, a button for 'mouse mode', three hot keys, a numerical pad, display, audio, and subtitle button. The bottom of the device has four small rubber feet that keep the player in place on wood or similar surfaces. 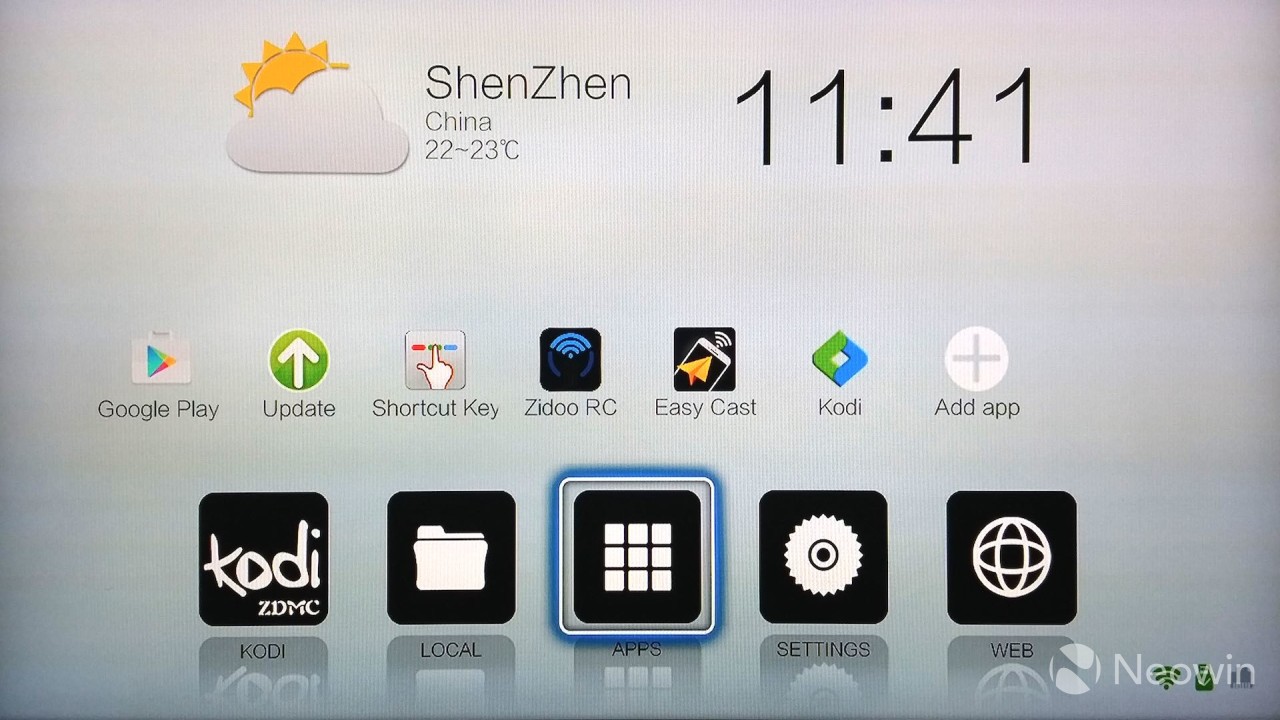 When you first turn on the device, it takes about a minute or so for it to boot up and launch into the menu. Although the X1 is powered by Android, unlike a mobile phone, a portion of the interface has been tailored for a media box. The X1 is running a custom Zidoo software that is running on top of Android 4.4.2. The UI is fairly basic with the main page being broken into three sections. The top third displays the weather and time for your location. The second row can be customized and allows you to add applications for quick access. The bottom and final row is the 'apps dock' and it houses Kodi, a local file manager, apps button, settings and an internet browser. The 'apps dock' portion cannot be customized. 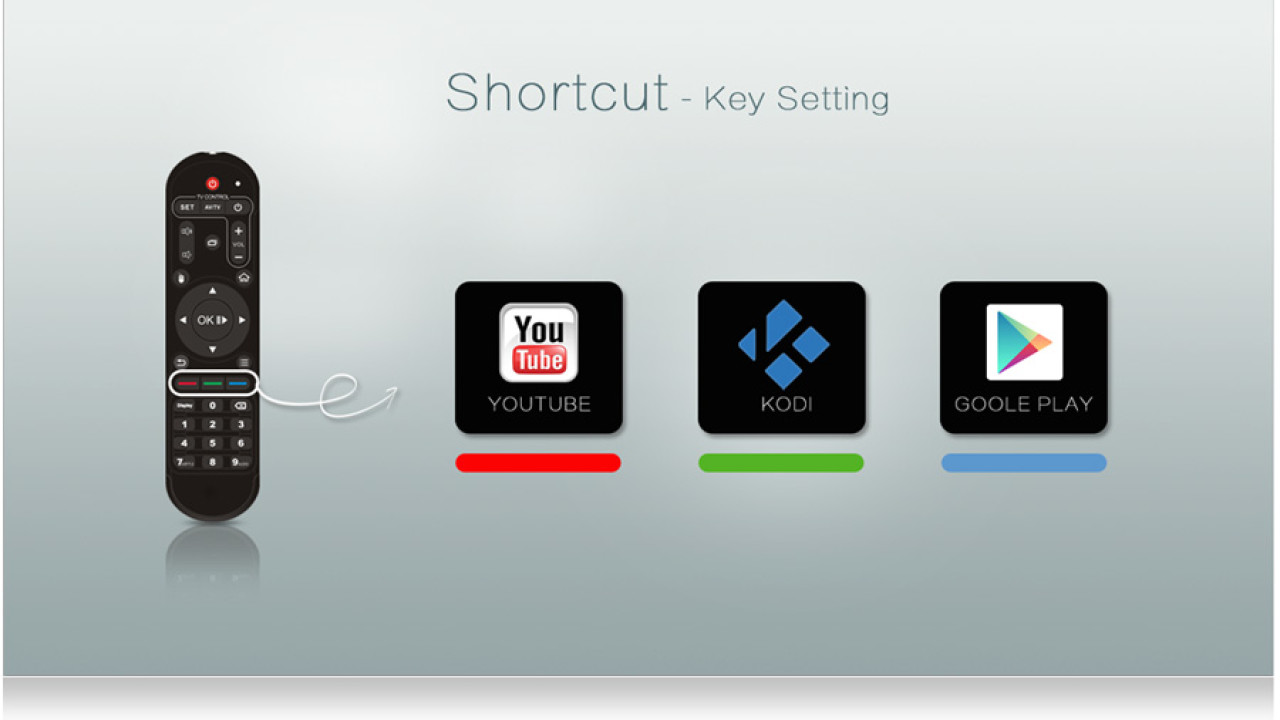 For the most part the software functions well, but there are obvious gaps when you head into the settings menu and try to navigate items that are not optimized. Unlike an Android experience with touch input, you will be required to use the included remote. The result is a tedious experience, that is only made complicated due to the input device and its limitations. The included remote does offer a 'mouse mode' that allows a virtual mouse cursor to appear on screen for easy navigation, but it is no replacement for an actual touch interaction. Sadly, even with the 'mouse' implementation, the non- optimized experience is poor at best and makes inputting text and navigating menus inconsistent and frustrating. Luckily, as stated before, this only occurs sparsely, but is something I wanted to note. For those looking for more control, Zidoo does provide an Android app that can convert your phone or tablet into a virtual remote.

The X1 has a fairly modest set of specifications when you compare it to mobile Android devices that are currently on the market. The X1 features an Allwinner H3 ARM quad-core A7 processor, a Mali-400 GPU, 1GB DDR3 memory, 8GB of internal storage, and supports Wi-Fi at 802.11 b/g/n. 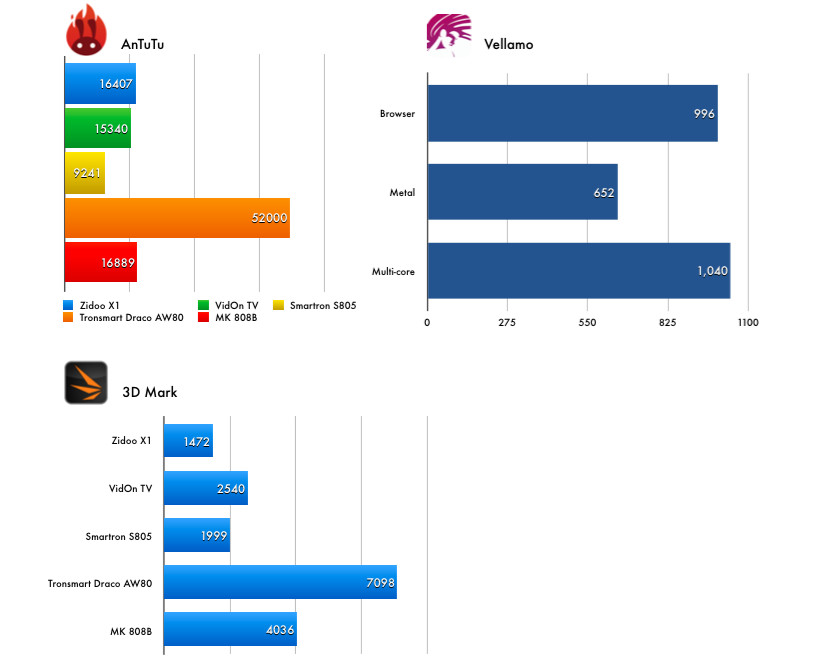 Naturally, like any Android device reviewed, we put the device through its paces using benchmarking software. As you can see from the scores above, the X1 performs modestly and is on par with a lot of the Android media boxes we have reviewed in the past. If we wanted to compare this unit using the 'Vellamo' scores, the X1 is only a tad better than the Samsung Galaxy Nexus that was released in late 2011. But, despite not having the most up-to-date specifications, the X1 performs surprisingly well. For those curious, I also utilized AnTuTu's Video Tester 3 and it scored the X1 with an 872. This means that the box passed 27 out of 30 tests with problem areas playing videos with the combination: mp4 - aac - avc | mp4 - aac - mpeg-4 | webm - vorbis - vp8. Just to see how a flagship device would perform, I also ran this tool on the LG G4. The device also had similar problem areas and also scored a 27 out of 30.

Despite not having the most modern set of specifications and high scores, the X1 was able to handle most if not all files that were tested. This included a variety of formats and resolutions on a 1080p display. I also tried streaming from different sources and the X1 kept up without issue. While it was advised to use the optimized Zidoo version of 'Kodi', the performance was identical when using other media players (MX Player) that can be downloaded from the Google Play Store.

But, what differentiates the Zidoo X1 from its peers is the advertised capability to handle 4K UHD content. Fortunately, I was lucky enough to have a pal with a 4K display and was able to test the X1 thoroughly. The X1 had no issue connecting to the 4K TV and output 4K at 30hz. The box does not automatically detect your display and this setting has to be changed manually in the display settings menu. Unfortunately, the quality of the Android menu and the overall UI didn't seem to be optimized for the higher resolution as it looked a tad fuzzy. Diving further, I found that a lot of Android applications aren't optimized for 4K displays, making it a bit difficult to test out the X1.

Not lingering on this issue, I decided to go straight to the source and started hunting out 4K UHD content. Surprisingly, this would prove difficult as there are limited sources when it comes to downloading true 4K media. While companies sell their own UHD media packs, these packs are 'locked' and cannot be played on all devices. YouTube and other streaming sources offer 4K content, but this is streaming and highly compressed. Luckily, there are a few sources available, with varying degrees of quality.

While the X1 is able to handle lower bitrate 4K around 30-60 Mbits/secs, it does begin to stutter and lag in both audio and video when you throw high quality files like the one shown above. Naturally, the higher the bit rate, the better the quality, experiencing less artifacts in the video. Despite, it not being able to handle top-tier media, I think the real issue is the lack of easily accessible 4K content, making the 4K aspect of this device pointless.

Overall, the Zidoo X1 provides a fairly good experience. But, there could be more done to make the UI, backend and remote experience more consistent. While I had some issues navigating the menus and settings, I think a consumer would have an extremely frustrating time. While X1's menus may not be properly optimized for 4K, it can still play 4K content via local and streaming sources. Although it cannot handle the highest 4K files, I don't think this will be an issue as there is barely any 4K content currently available. A majority of the 4K content that is available is via streaming and that is heavily compressed and is no issue on the X1.

Bottom line, the Zidoo X1 checks all the boxes when it comes to streaming and playing local media. The X1 is affordable with an MSRP of $59 USD and comes with a one year warranty. Despite its paltry specifications, the X1 was able to handle pretty much all movie files and streaming duties. The only concern would be how well Zidoo would continue to support the device via software updates. While this doesn't quite beat pricing from the likes of the Chromecast or the MK808B it does provide more features. While this is my first time with an true Android media box, I found that the experience as pretty seamless when it was all set up. While the X1 was able to stand up the challenge of 4K, the real question is: when will see more 4K UHD content that is easily accessible.

I'd like to extend a big 'Thank You' to the folks at Geekbuying who supplied the Zidoo X1 for this review. If you are interested in purchasing this device, you can pick it up from Geekbuying. You can check out more at Zidoo's official product page.