A recent photo from China provides a look as to what could potentially be the 12” iPad Pro set for release later this year. Previous statements from Apple indicated they wish to target the education market, where tablets could become a replacement for traditional textbooks within the classroom. 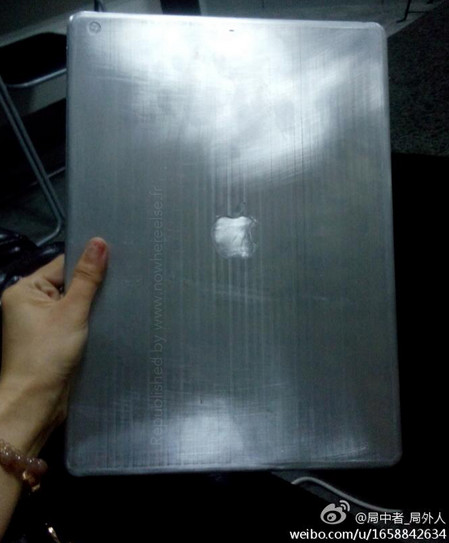 The prototype seen in the image appears to be made from aluminum, as well as featuring the Apple logo in the center of the device. A small camera in the top left corner also complies with other Apple products. Reports indicate that the company is testing the tablet at 4K resolution, a 4096 x 3072 display.

The alleged industrial mockup is only seen in one image, so it may be hard to confirm its validity. However the device screams of Apple in terms of design, and it is a possibility we could see the iPad Pro in the not to distant future.

The larger 12" display could perhaps be in response to the recent success of Google's Chromebooks, that have gained a lot of popularity in the past months. The next Microsoft Surface lineup may also be challenged if the iPad Pro (previously rumored to be called the iPad Maxi) hits our stores soon. Stay alert for news and updates on this potentially game-changing tablet.

Till then we suggest you cast a cynical eye on this.