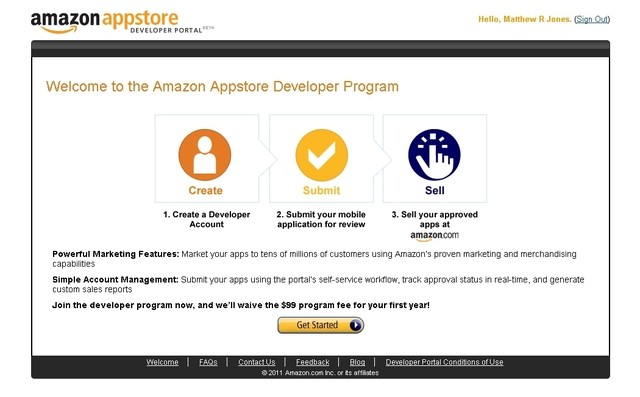 In what some may see as the first step of a strike against Google's Android Market, Amazon today threw open the doors of its own Android App Store to developers.

Rumours about the store - simply dubbed the Amazon Appstore - began circulating in September last year, with TechCrunch laying out a number of details regarding pricing, terms and conditions. With the opening of the store to developers today, many of those details have been proven correct, and show that Amazon is taking a fairly Apple-esque approach to apps.

First and foremost, apps that will eventually appear on Amazon's store will need to be vetted by the shopping giant, in stark contrast to Google's policy of ''openness'' that allows anyone who signs up to submit apps to the Android Market. That policy has drawn criticism from some who claim the policy lowers the quality of apps available from the Market.

Amazon's rules on what will and won't be allowed on its store are largely what you'd expect - pornography and apps that promote illegal activity are out, as are those that infringe upon privacy, intellectual property and copyright. Amazon's definition of ''offensive content'' is ''probably about what you would expect'' according to an FAQ page (sign-in needed), and the company reserves the right to ''determine the appropriateness of all apps and to accept or reject any app at our discretion.''

Pricing will also be a major differentiator for Amazon - developers will get 70% of the sale price of the app or 20% of the list price, whichever is greater. The list price is set by the developer when they submit their app and essentially equates to the apps ''Recommended Retail Price''. Sounds about normal, right?

Here's the kicker - Amazon reserves the right to set app prices themselves, even to the point of making a previously paid app free, though in that case the company guarantees the developer will still get 20% of the list price. With apps able to be listed on both the Android Market and Amazon's store simultaneously, the implication here is that Amazon will have the power to discount apps to make their own offerings more attractive to users.

Amazon's Appstore is US-only for the moment and developers will need to shell out $US99 - the same fee as Apple's Developer Program - to get in on the action. It will work on Android devices running version 1.6 of the mobile OS and higher, though according to TechCrunch, users will need to do some quick tinkering to allow installation from “Unknown Sources”.

Unsurprisingly, access to the Amazon Appstore will require an Amazon account, and will tap into the company's already widely-adopted one-click payment system.

In an interview with Amazon's Aaron Rubenson and Ameesh Paleja, TechCrunch was also told that the store's mobile interface is being created with tablets in mind and will launch sometime later this year.

For its part, Google responded to a TechCrunch enquiry about Amazon's venture into the world of apps with a two-line statement.

''Android is an open platform – and entities other than Google are free to create their own content and marketplaces, much like the web,'' a spokesperson said.

But with the number of third-party Android app stores on the rise, it would not be surprising if the search giant is quietly nervous - while more choice could end up a boon for users in terms of competitive pricing, it could also end up confusing them and frustrating developers who will need to choose which store(s) their app will appear on.

But with an established online presence, strong brand recognition and a rock-solid payment and purchasing system - not to mention a user base numbering in the millions - Amazon stands a better chance than most at success in the app game.