AMD launched several products during its CES 2022 keynote presentation. And while the company went into great detail describing its upcoming Ryzen 6000 RDNA 2-based Rembrandt mobile APUs, it was rather tight-lipped about the new Radeon RX 6500 XT budget card.

For example, the Red team completely skipped the fact that the card comes with only 4 Gigs of video memory. Also, the official specifications of the 6500 XT on AMD's site reveal the new budget graphics card lacks AV1 decoding and H.265/ HEVC encoding, something that other larger Navi GPUs all feature.

The lack of AV1 support on the new Navi 24 RX 6500 XT and the RX 6400 essentially makes these GPUs quite ordinary as a modern Home Theatre PC (HTPC) driver as AV1 content is pretty widespread nowadays.

And even as a gaming solution, these new AMD Radeon cards seem pretty gimped. German outlet 3DCenter noticed on ASRock's site that the Radeon RX 6500 XT is limited to just four channels (x4) of PCIe bandwidth. 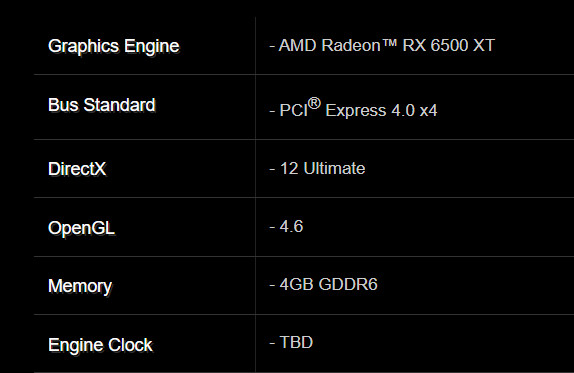 While the card does support PCIe 4.0 and that should be plenty for a GPU of this caliber, anyone running this card on a PCIe 3.0 motherboard will essentially be limited to just half the throughput, ie, 32GT/s or around 4GB/s. And in a VRAM intensive game like DOOM Eternal, the low PCIe bandwidth could lead to a very large performance loss.