With the launch of its 12th Gen Alder Lake processors, Intel now occupies the top ranks of the popular benchmarking tool PassMark's single-threaded CPUs' chart. While that is a commendable feat, when it comes to multi-threaded performance, the opposite is observed as Intel finds it difficult to compete due to AMD's architecture managing to cram in more cores and cache than Intel's.

As such, when looking at the multi-threaded CPUs' PassMark chart, which was updated earlier today, the top spots now are all AMD, and the list of processors is headed by the recently launched 64 core Threadripper PRO 5995WX.

While there are only five samples, the average score of the 5995WX stands at 108,822, which is nearly 28% higher than its predecessor the Ryzen Threadripper PRO 3995WX. This can be explained by the IPC gains on Zen 3 which is what the new Threadripper PRO 5000 WX series is based on, and the higher boost clocks on the 5000 WX series compared to the 3000 WX.

A number of 64 core EPYC processors are also on the list, though none of them come close to the newly released Threadripper PRO 5995WX in terms of multi-threaded performance. 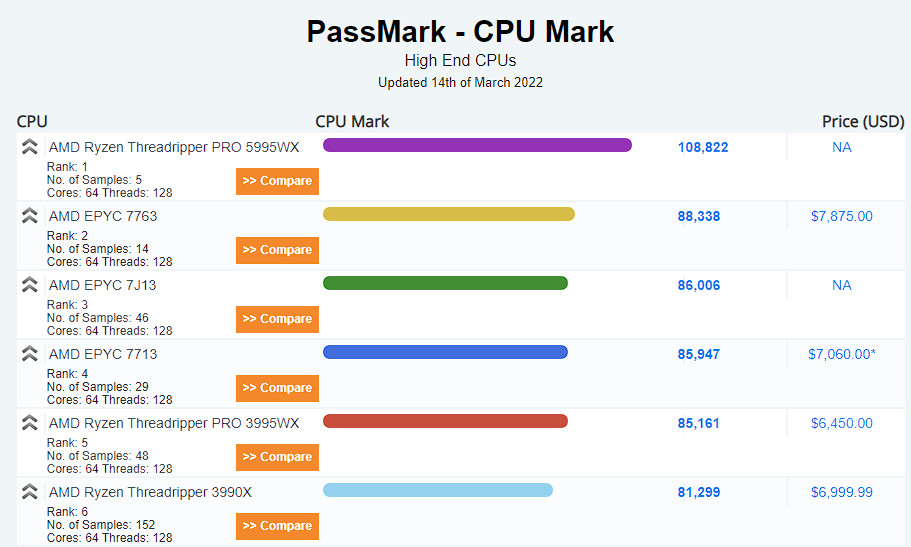 As mentioned above, Intel has found it hard to find a place in this list as the highest positioned Intel chip is the 40 core, 80 thread Xeon Platinum 8380, though, it only manages to score 62,317 points.

Source and image: PassMark via Wccftech