Time for some Apple iWatch pipedreams. 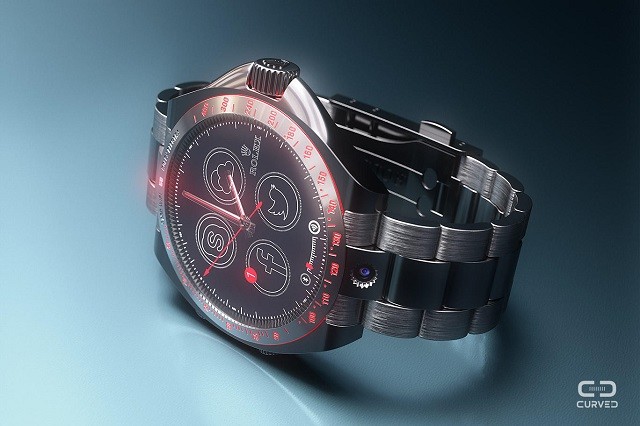 Rolex is a brand that screams elitism. The watches themselves are phenomenally expensive, while the company aligns itself with golfers and provides speedometer and chronograph technology for the BLOODHOUND Project, a rocket car attempting to break the land speed record within the next two years.

Therefore, it comes as no surprise that someone has decided to mash up what has been suggested as Apple (whom many consider to be a very elite piece of technology) and the Rolex brands to show just what an iOS powered Rolex would look like. Or is that a Rolex powered iPhone watch thing?

Either way, the concept video from Curved shows the potential for a normal chronograph style watch that contains just enough technology to make it useable, from a social media aspect at least. Did you see the subtle placing of the camera? Couple that with the practical and quite diminutive dock/charger and this is definitely something that we could see in the not too distant future.

We must say however, Apple isn’t mentioned by name in the concept, only in the following English excerpt from the original article:

The homescreen is black and completes the "flat design" of iOS 7 with the use of the same App-icons and notifications.

So you would have to say that for the time being, this device is likely to be all Rolex. But then again, who would be providing the internal electronics and the OS for the device? Apple? Google? Microsoft?! Or would Rolex take a chance and develop their own OS?

We have no doubt that this would be a gorgeous device to look at and wear. But the obvious question is: what would it cost? That question is rhetorical. And the answer? Expensive without a doubt. The concept reminds us of the phones from Vertu, a once Nokia luxury brand that kitted out phones with, em, sparkles and leather. And who can forget Goldgenie, selling gold plated iPhones for somewhere around the £3,000 ($4,000) mark.

It's clear that there is a market for devices like this, no matter what the premium may end up to be. But maybe a smartwatch, as a general piece of technology, needs to be more widely adopted before premium technology, such as the one in the concept is being touted as the next must own device.