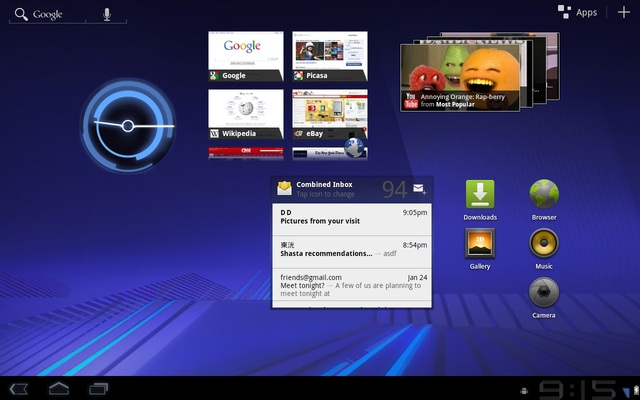 Today, Google has officially made available the preview SDK, and further official details about the new version of Android, codenamed Honeycomb. A video was leaked out of the "Android Developers" YouTube account of Android 3.0 in action a few weeks ago, so we knew an official peek couldn't have been far off.

Right now, it appears that the new version of Android does not target mobile phones, but only larger devices such as tablets, as the interface has received a complete overhaul to become more tablet friendly. New features include a new 2D and 3D framework, a new system bar (found at the bottom of the screen), an action bar for quick OS-wide actions, five new customizable home screens, a redesigned keyboard and new text selection tools.

In addition to the system wide updates, the browser has been updated to include tabs, Google Chrome Sync and new multitouch support. The Contacts application has also been updated to be more tablet friendly, as well as the Email application. There are further, deep OS improvements, which are detailed here.

Motorola and Asus announced Honeycomb based tablets at CES 2011, which will be released later this year. The SDK being publicly available should indicate that we will start to see more Android 3.0 based tablet devices surfacing in the near future, but Google is yet to announce any specific dates.