The success of Angry Birds almost defies belief, especially when you consider that the game is less than two years old. It debuted on iOS back in December 2009, but since then its popularity has exploded, and its availability now extends not just to other mobile platforms, including Android, Windows Phone and webOS, but also games consoles (PlayStation 3 and PSP) and even desktops, with versions made available on Windows, OS X and for Google’s Chrome browser.

The game’s developer, Rovio, has revealed that the game, in its many variations, has now been downloaded some 350 million times. That’s a big number, but it’s not the only impressive figure worth considering; the rate of the game’s growth is also remarkable. Fortune reported at the beginning of June that the number of downloads over the preceding three months had been 100 million; in the three months since that article until now, another 150 million downloads have been added, indicating that the game’s popularity is still growing at a considerable rate.

Gamers across the globe spend a total of 300 million minutes every day playing Angry Birds – and when they’re not playing the game, it seems that many still want to surround themselves with related merchandise. A million branded t-shirts are sold every month, and stuffed toys are also selling at the rate of a million per month, and this seems to only be the beginning of Rovio’s efforts to capitalise on the popularity and broad appeal of the game.

There have already been extensive promotional campaigns, such as the Angry Birds Rio special edition release, which tied in with the animated hit movie ‘Rio’ earlier this year, and there’s persistent talk of an actual Angry Birds movie being produced in the not-too-distant future. Additionally, as reported by SlashGear back in June, Rovio plans to open 200 dedicated Angry Birds merchandise stores in China over the next year three years, selling everything from toys and stationery to footwear and key chains. 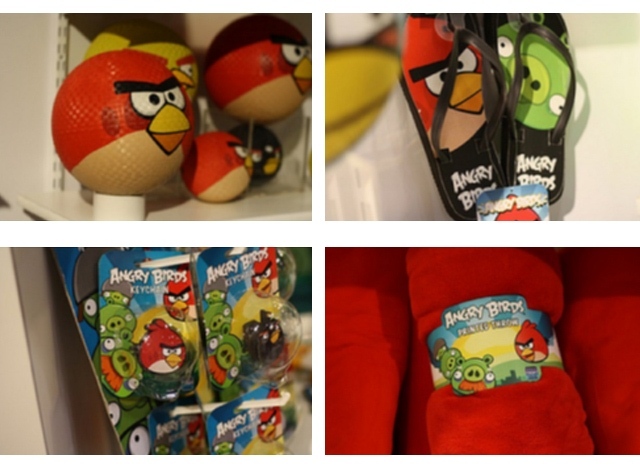 New developments promise to bring some of the game experience into the real world. Angry Birds Magic is available exclusively on Nokia handsets, and uses NFC elements to unlock levels within the game; ‘Magic Places’ uses geo-location to release extra functionality and features, and Rovio has promised to bring it to more GPS-enabled devices in the future (it’s currently only available for the Barnes & Noble Nook).

Rovio is currently seeking funding from investors that would value the company at $1.2 billion, so the marketing and merchandising push for Angry Birds certainly won’t be slowing any time soon.