When it comes to working on the go, a laptop, tablet, or even a smartphone are most likely the preferred options. Now, if you own a laptop and are someone that does a lot of multi-tasking, you'll know that no matter how large the screen, it just isn't enough space. That's where a secondary display can come in handy. This is something that you might use in a stationary location but bringing a monitor with you while on the go, this idea might not even have crossed your mind. That's where the AOC I1601FWUX might come in handy, as it is a portable monitor that doesn't require a separate power source, instead, being powered directly from a USB Type-C port on a supported device. 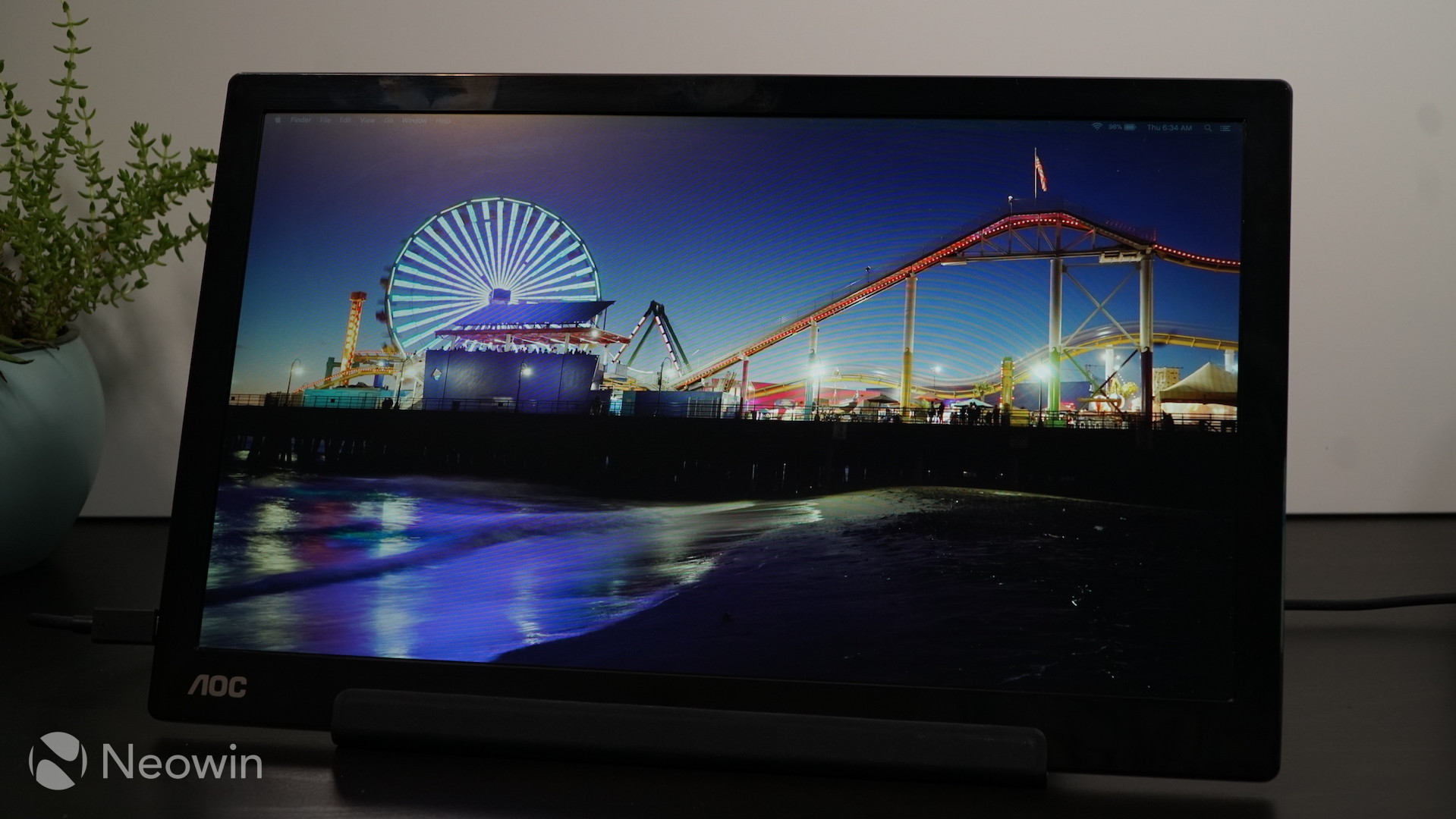 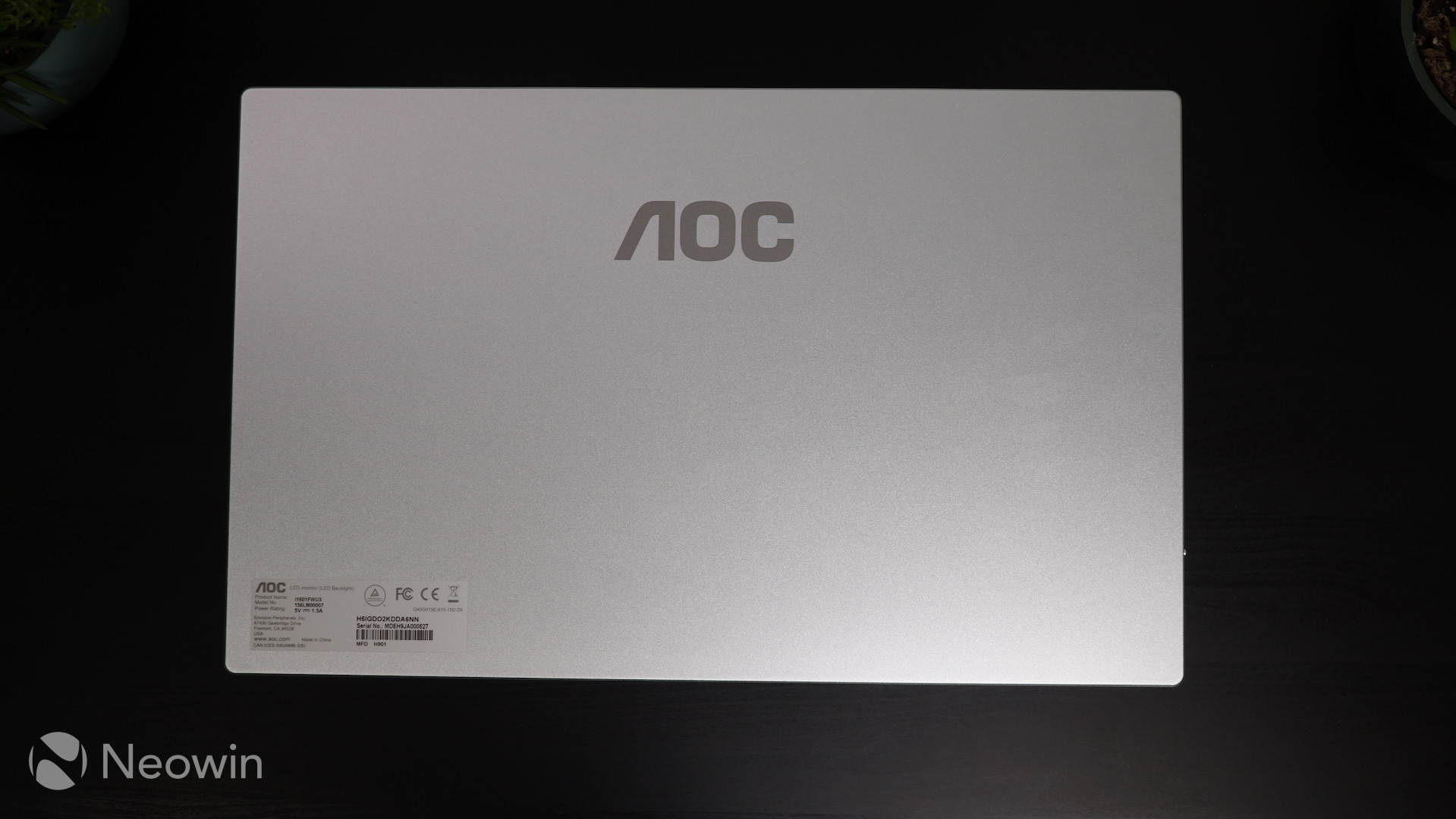 When it comes to the design, this isn't the most exciting thing you'll see out on the market. It doesn't have a flashy illuminated AOC logo on the rear and there isn't RGB lighting, but its subtle presentation looks good and should blend no matter what environment it is used. As far as quality, it feels solid in hand, which is important, considering that this will most likely be packed and carried around quite a bit. 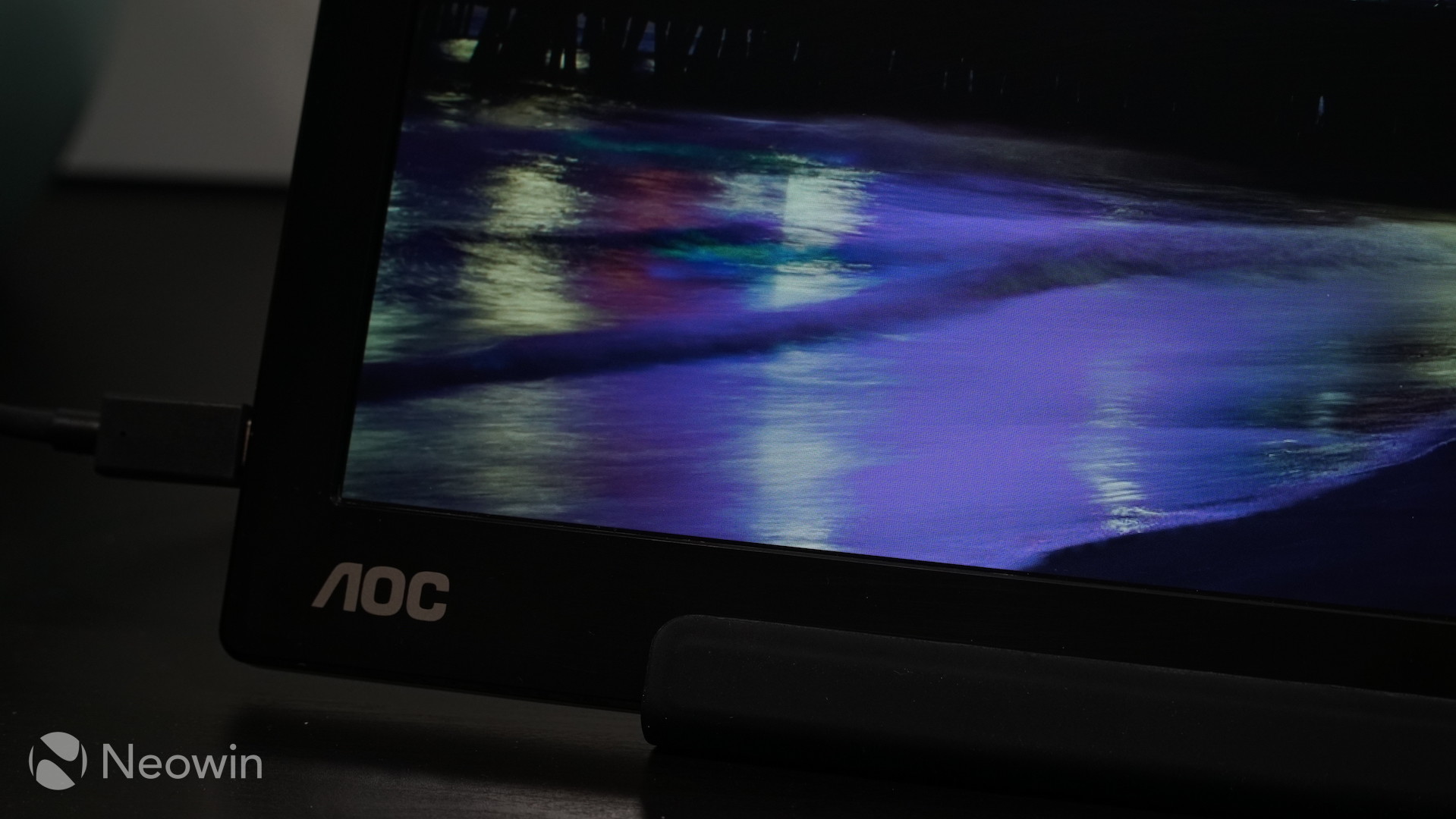 Before we begin, let's get this straight, this is a basic monitor that is meant to expand your computer's desktop space. Since this is portable, this will most likely be used while on the go. It doesn't have the highest resolution, the best color reproduction, or the most features, but it will allow you to set up an extra monitor in the middle of nowhere without the need for an external power source. Also as a disclaimer, I did try to get this working on two different Windows 10 units and it did not seem to take. It would simply just flicker on and off. I did see some solutions online for this particular problem, but in the end, I wasn't able to get things to work. Because of this, the monitor was tested solely using a MacBook Pro. 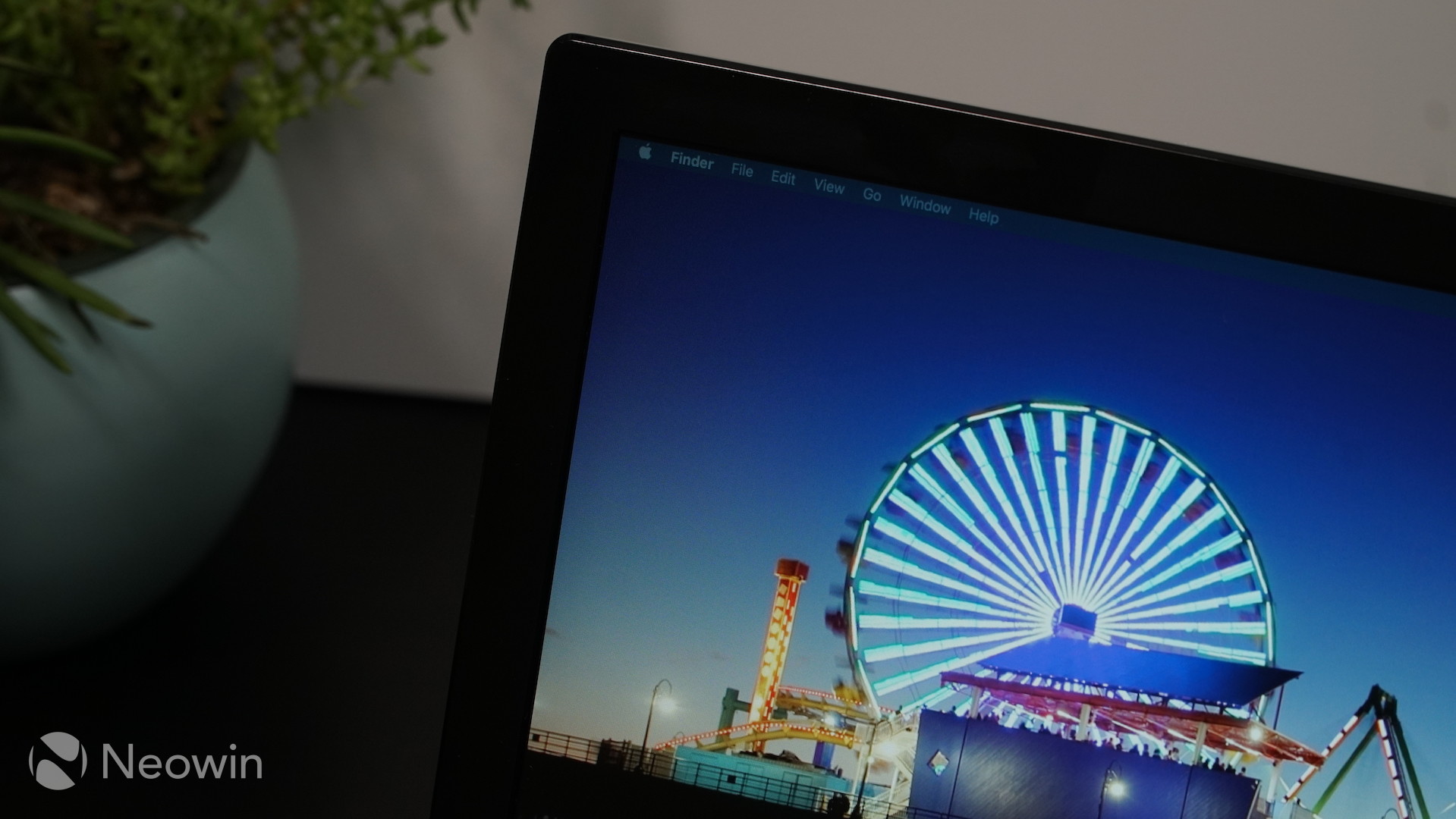 Despite it not being plug and play on the Windows 10 units I tried, the I1601FWUX worked instantly when plugged into a Mac. It didn't require any drivers and it just powered up and started showing an image in less than five seconds. It felt kind of weird having a secondary display, but using it for a few days, it made sense. It hasn't been a necessary part of my arsenal, but having a press release on one screen and the writing area on another or similar setup, proved very useful. 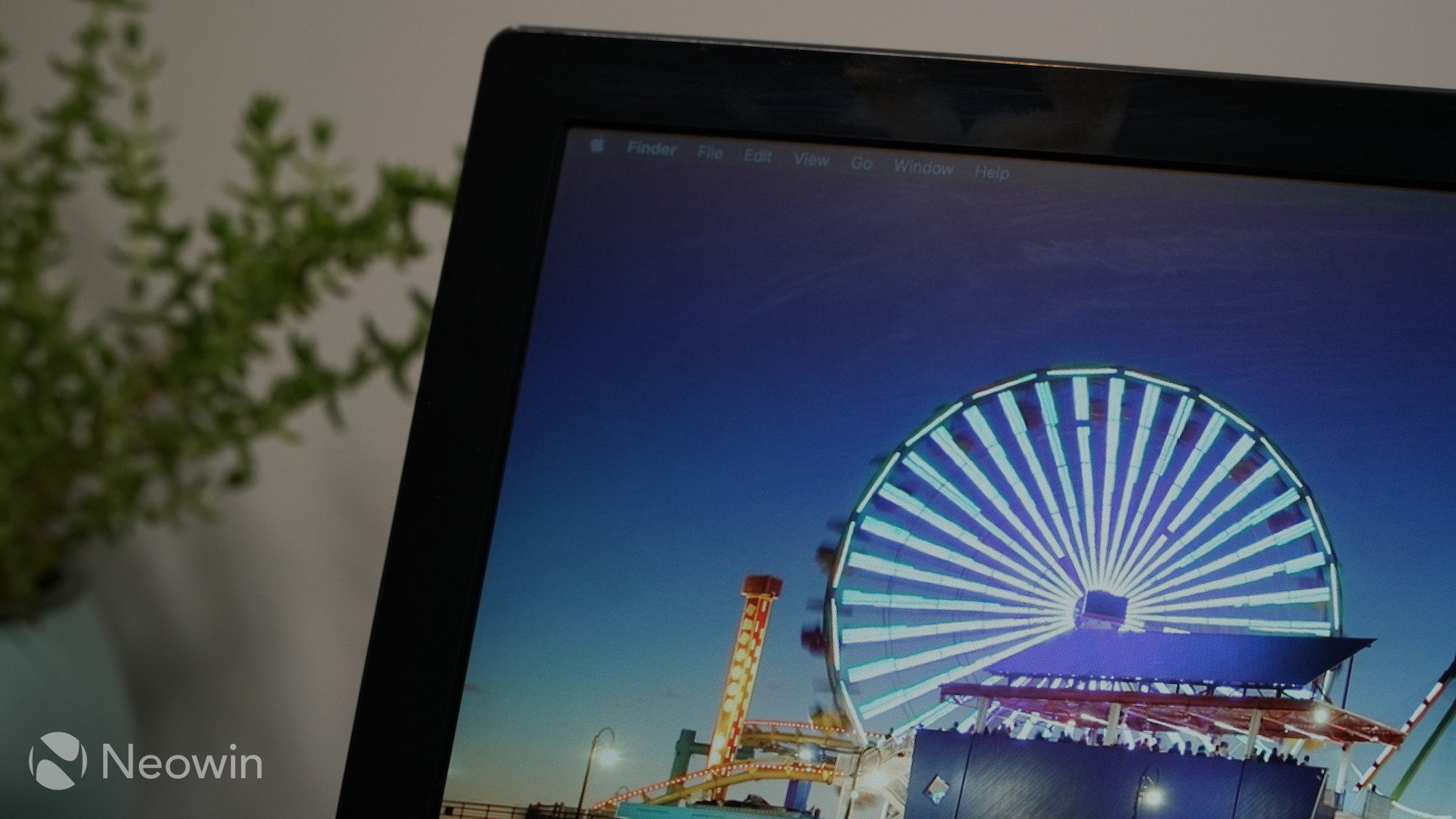 Now, this isn't the brightest display available, with it being rated at 220 cd/m², but it was enough when it came to typing or watching movies indoors and also when outdoors. The matte screen does do its best to mitigate reflections, but you still get glare from nearby light sources. The display looks a bit soft and washed out, most likely due to it only supporting 262,000 colors, but things aren't that bad. The blacks don't look quite as bold either but again, this isn't a product that I'm expecting to have elite color reproduction.

The illumination looks even and when a 256 shade gradient was applied for testing, the display looked relatively even with only a few areas that you could tell there was a transition. As far as viewing angles, the picture can get a little dim when not viewed straight on, but you can still get a good idea of what you are looking at on the screen, regardless of which angle you might be viewing it from. Some might have problems with a screen that has a response time of 5ms, but in my daily use which included writing, YouTube, and some light movie watching through Netflix, this wasn't an issue. 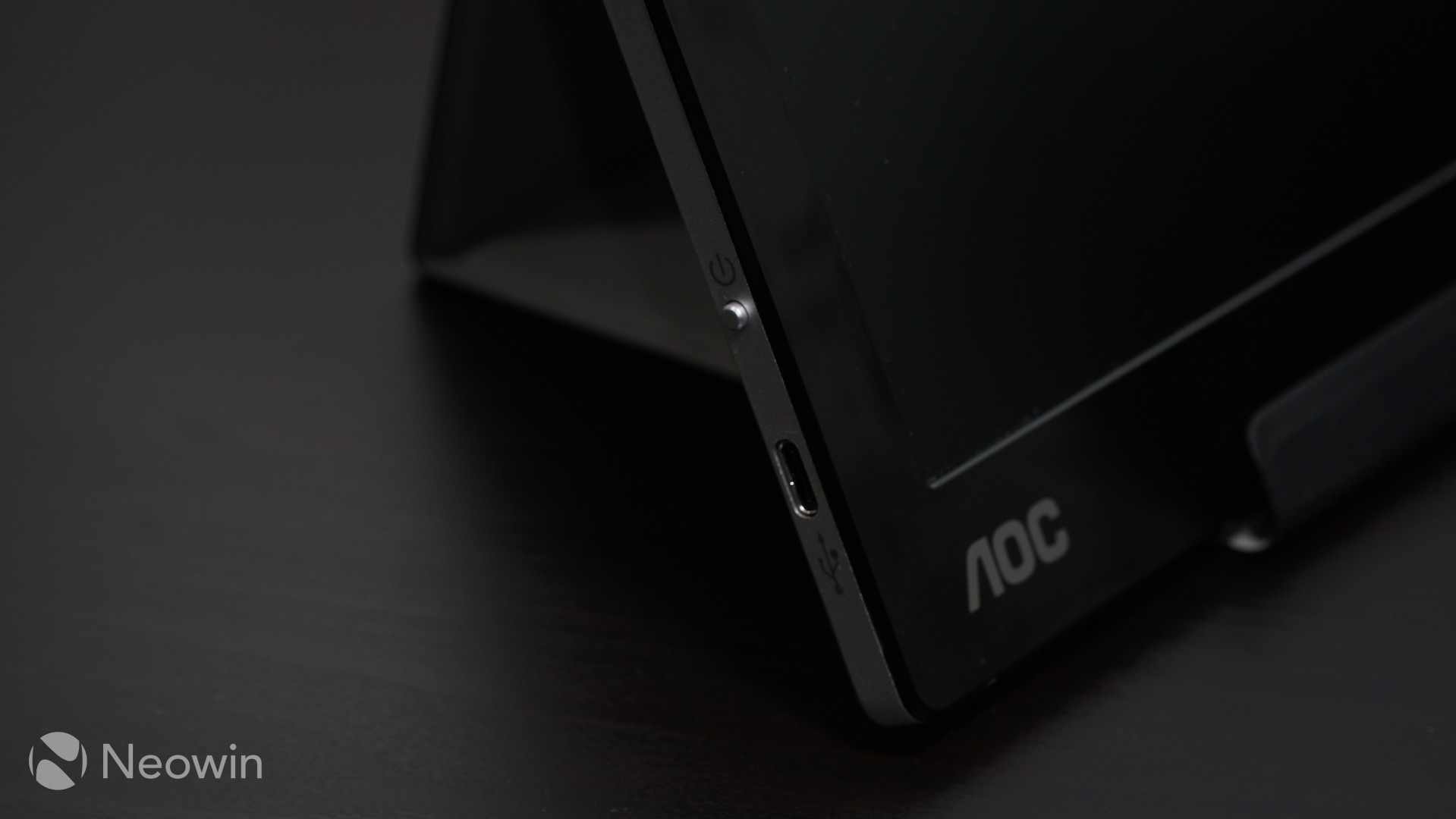 Although supporting USB Type-C is great, it would have been even better if it could have also supported USB Type-A to USB Type-C. This monitor did not work when trying to hook it up using an adapter or even just a Type-A to Type-C cable. A couple years from now this might not be such a huge issue but Type-A is still a lot more common currently, so the option would have been nice.

If there is a solid complaint, it would be the "case" that comes with the device. This is essentially a cover that protects the front of the display when you are carrying it around but also doubles as a stand. It folds and has magnetic sections that latch on to the screen. Now, your ability to use the monitor relies on the quality of this stand and sadly it just isn't all that good. 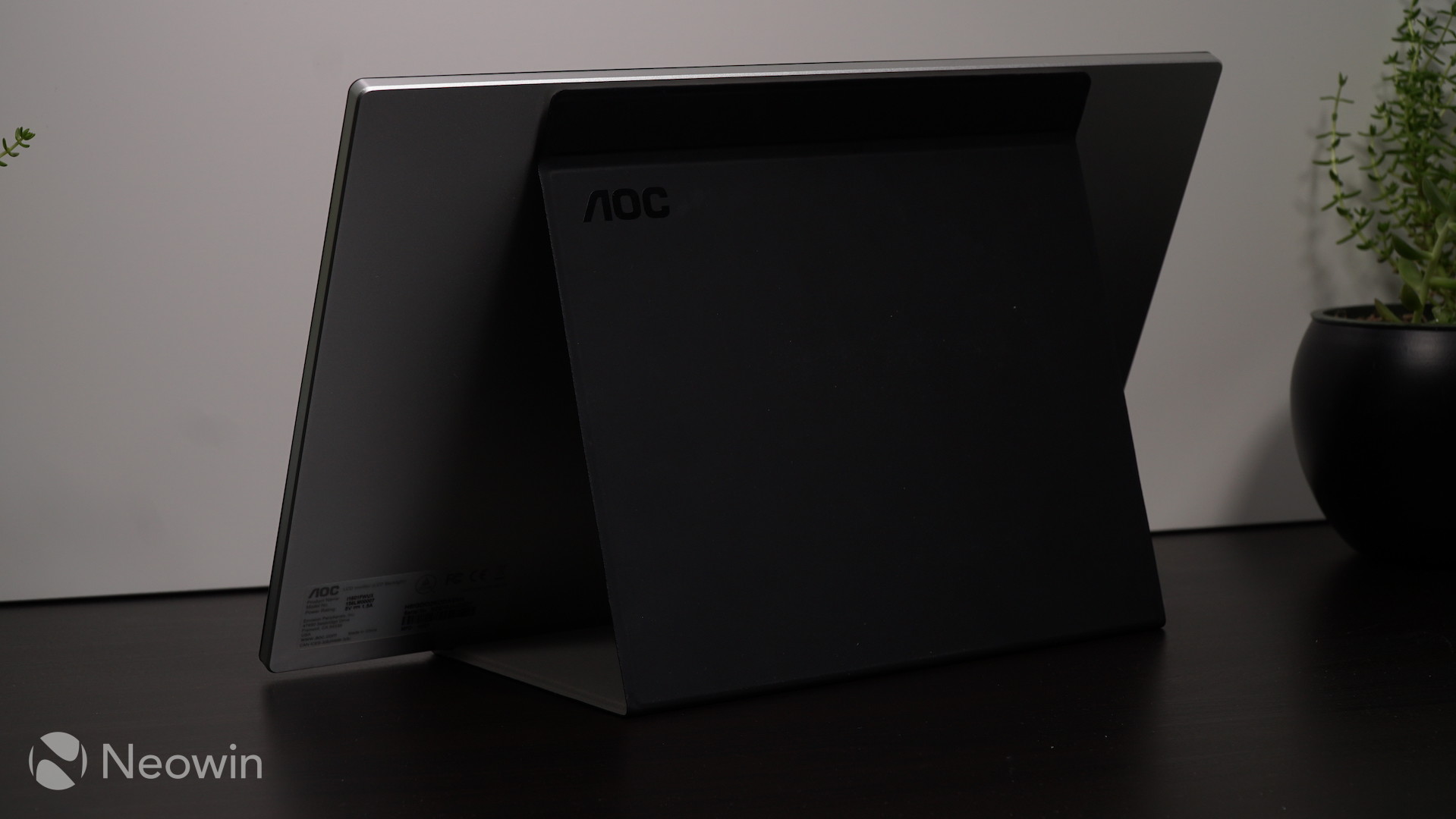 The warnings in the instruction manual advise that you "not adjust the viewing angle over 5~25 degrees in order to avoid damage" and also recommends to "not touch the LCD screen when you change the angle. It may cause damage or break the LCD screen." I didn't think that it would be this serious of an issue but even the slightest breeze and the monitor came tumbling down. The sad part is that even a slight bump to the table it might be set on can cause the cover to undo itself. 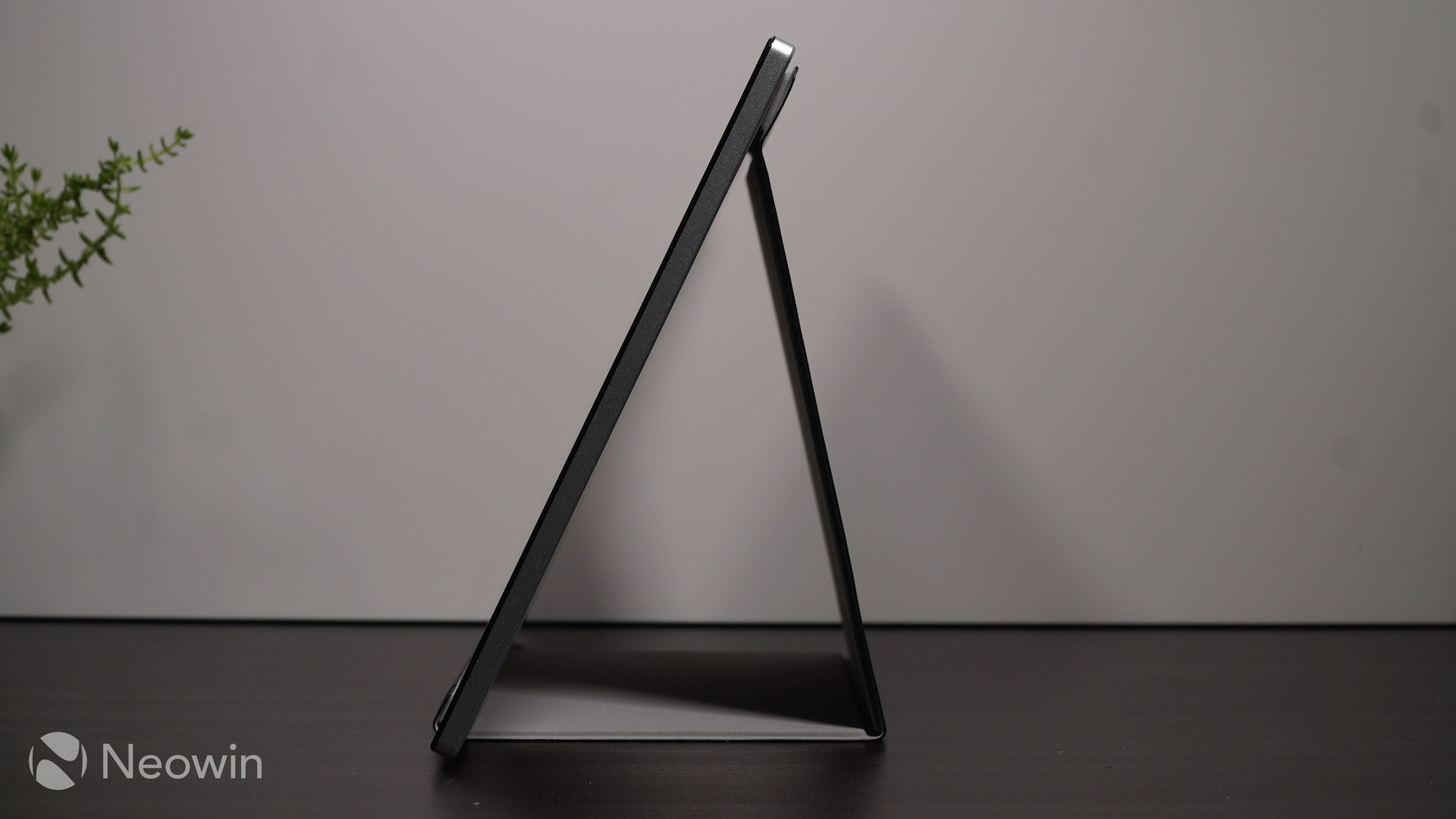 With the supplied review unit, the effectiveness of the magnets seemed below par, but you would think that they would be strong enough to cope with an accidental bump. As far as lessons learned, if you're trying to adjust the monitor settings or just tilt it a tad bit in a different direction, make sure you hold onto the whole unit and also reattach the magnetic portion to the back, this is just to ensure that it will not fall over. 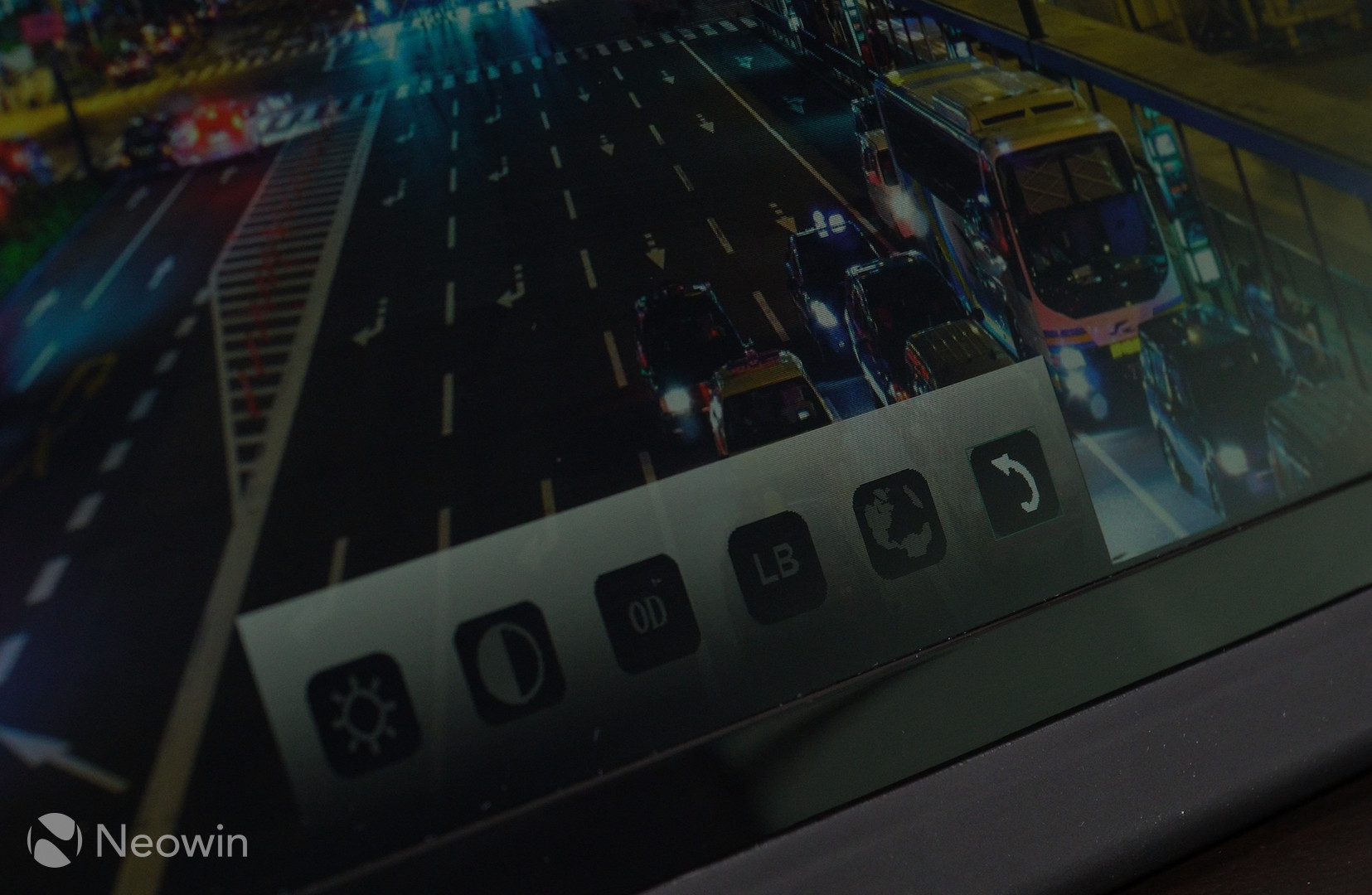 As mentioned before, you do have the ability to adjust the settings of the monitor and can do so by tapping the power button when the monitor is on. When you tap the power button, it will activate the on-screen display (OSD) which includes adjustment options for the brightness, contrast, overdrive, low blue light, and language. In order to select an option, you must tap the power button until you highlight the appropriate choice, then leave it there for three seconds. 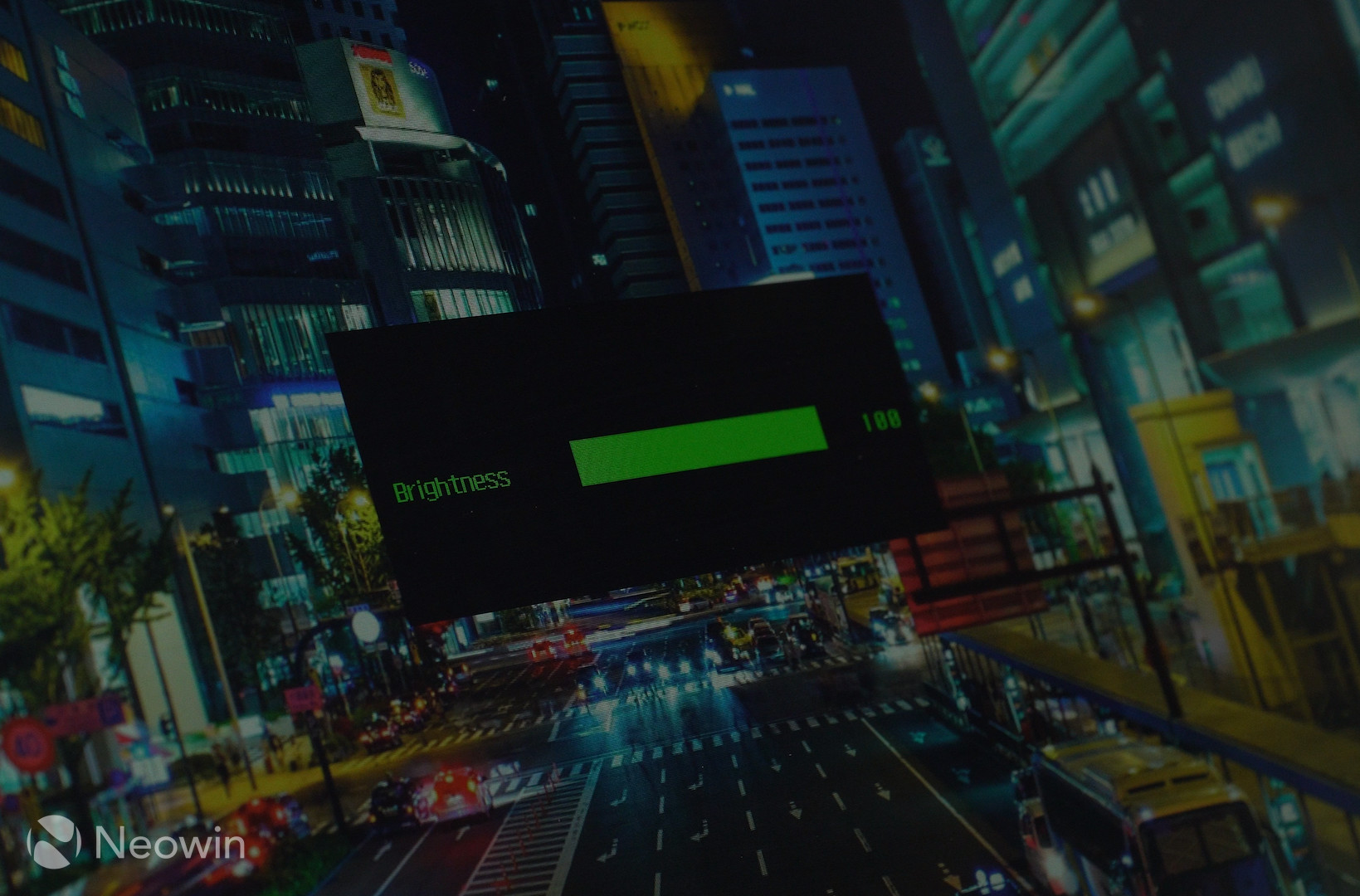 Once in the selected menu, you can use the power button again to make desired adjustments. Since there is only one button, if you manage to overshoot the desired setting, for example, if you wanted 90 percent brightness but went to 95, you can just continue to past 100 percent, where it will reset the setting back to zero. You can then start over and try again. This can be tedious at times since you are relying on one button but AOC does include software for your computer that will also allow you to control the settings.

The firm also includes software for your PC (e-Saver) that will allow you to control the power management and a desktop screen splitting tool. The additional software can be found on the physical disc that is included in the box. The disc also has the user guide and monitor driver. 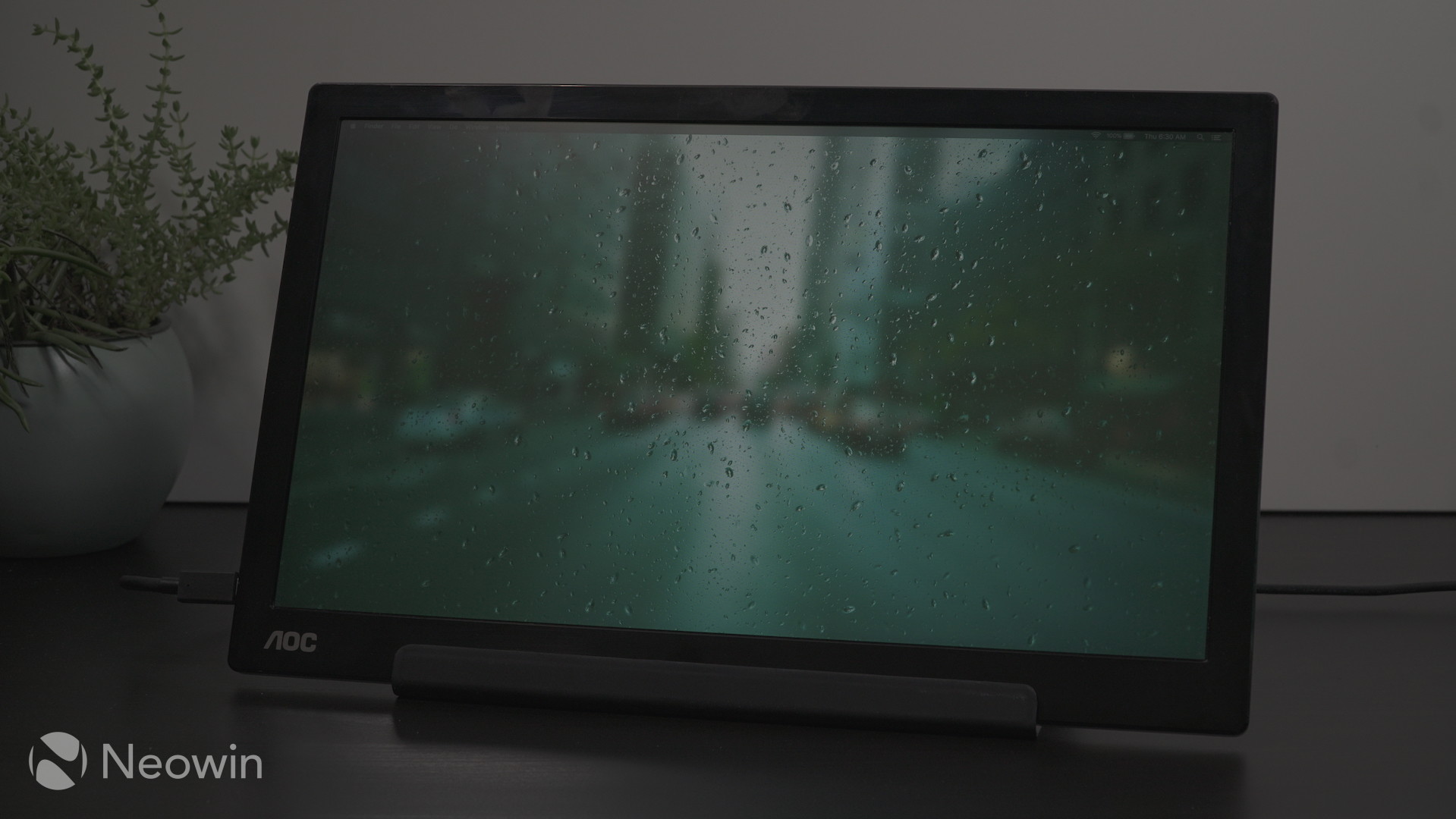 The AOC I1601FWUX is a pretty solid performer when it comes to being a portable display. It is slim and light enough to carry around with a laptop and doesn't require an external power source. It doesn't produce the best image but it can work to get the job down for most tasks.

While the unit itself is good, the crux has to be the case. The cover does a good job of protecting the LCD from external bumps and bangs but it just doesn't do its job when it comes to propping up the monitor. The magnetic hold on the back of the display just isn't strong enough and you can feel this from the first time you slap it on. The constant paranoia of making sure this thing isn't going to topple over detracts from the overall experience. AOC should have come up with a better solution.

As far as price goes, it currently retails for $209, but its average price on Amazon has been around $200 over the past several months. This seems like a fair price for something like this but there are other brands producing similar items, so you might want to have a look at the competition to get a view of the landscape. The AOC is a pretty good option when it comes to a secondary monitor on the go but it won't be for everyone.