Introduced by the now famous "1984" advert, directed by Ridley Scott and aired during the third quarter of Super Bowl XVIII on 22 January 1984, the first Macintosh is turning 25 this weekend.

The Macintosh, released on 24 January 1984, sold for $2,495 and came with a 9 inch screen in an upright beige case, 128k of RAM, a floppy drive, a keyboard and a single-button mouse. Sales were initially strong, with the Macintosh selling 72,000 units by May 3, 1984. However, sales dropped afterwards and the computer was re-badged as the Macintosh 128K when its successor, the Macintosh 512K, was introduced in September 1984. 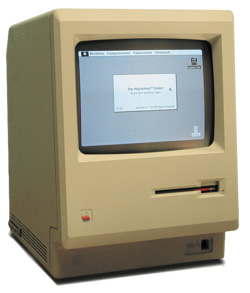 While it was not the first commercial computer to include a graphical user interface and mouse, the Macintosh helped to popularise the use of a GUI and mouse. Windows, Microsoft's first operating system with a GUI, did not appear until 1985 and failed to gain much popularity until the release of Windows 3.x in 1990.

Throughout the 1990s, Apple continued to lose market share to IBM PC compatible machines running Windows, although the introduction of the all-in-one iMac in 1998 was the beginning of a resurgence for the Macintosh brand.

Talking to the BBC about the first Macintosh, Mark Hattersley, editor in chief of MacWorld UK said, "It was a hugely popular machine. It took desktop computing away from IBM and back to Apple for a good number of years. It brought the notion of the desktop graphical interface to the mass market."

Finding a working 25-year old Macintosh 128K can be hard now, with many suffering from "bit rot". Fortunately, the National Museum of Computing at Bletchley Park in the UK, has many working Apple computers, some even older than the 25-year old Macintosh, according to director Kevin Murrell.