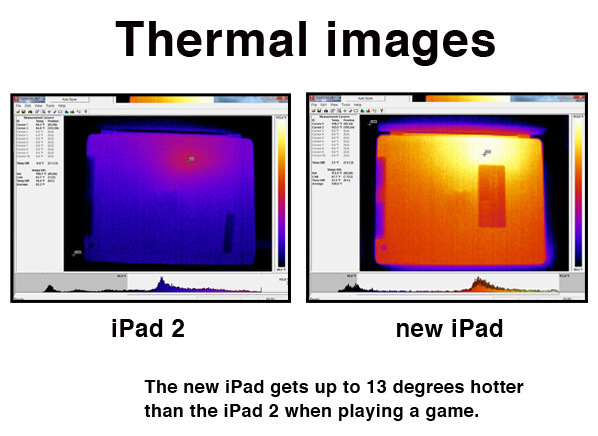 Earlier today, reports started to come in from some users of Apple's new iPad, claiming that the tablet was getting hotter than the iPad 2 when being used. For its part, Apple sent a statement to AllThingsD.com claiming that new iPad runs "well within our thermal specifications." but would not give any details.

Now the well known products testing organization Consumer Reports has posted a story, claiming that its own tests show that the new iPad can get "significantly hotter" than the iPad 2 when it runs high end games.

The group tested the new iPad and iPad 2 running Epic Games' hit iOS title Infinity Blade II while it was plugged into a power source. According to the article, the new iPad's temperature went up to 116 degrees Fahrenheit while running the game for 45 minutes with WiFi on. That's 13 degrees hotter than the iPad 2 under the same conditions.

Running the game unplugged, the new iPad got up to to just 113 degrees, which is still hotter than the iPad 2. The report also claims that while running Infinity Blade II, the new iPad didn't charge its battery when it was plugged in. In fact it actually drained the battery while plugged in to play the game.

Previous reports from users have said the new iPad gets hot even while running less intensive tasks like checking their Facebook account. Consumer Report's article did not focus on those applications.