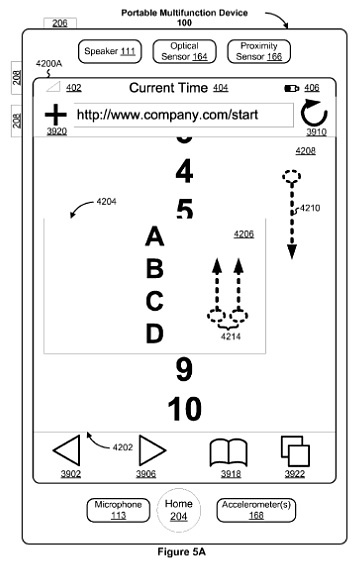 A patent covering multi touch technology was awarded to Apple by the USPTO yesterday. The patent, originally filed for in 2007, was just given the stamp of approval and could spell doom for other smartphone and tablet manufacturers. Specifically stated in the original patent filing:

Reading further, the patent is specifically aimed at Apple's iOS user interface and its multi touch gesture based navigation. What's interesting is that the wording is so broad, it may give Apple the ability to sue rival manufacturers for their own user interfaces if they can prove that there exists a decent enough likeness. In recent lawsuits, Apple claims that Samsung copied the iOS interface for its own smartphones, so this idea is not out of the realm of possibility. Patent number 7,966,578 may give Apple the fuel it needs bring lawsuits against manufacturers like HTC, LG, and others for the same reason. The effects of this, in addition to other patents, could have far reaching effects on other manufacturers. This patent could be used by Apple to bully its competitors or make them pay royalties on multi touch interfaces. We've already seen that they seem intent on protecting their intellectual property at all costs. The patent covers its iPad and iPod Touch devices as well, so smartphones will not be the only target. Whether or not Apple takes a swing at rivals with this patent remains to be seen, but Jobs & Co. have almost certainly gotten their attention.