In a move the music community have been anticipating for some time, Apple today announced the belated release of Logic Pro X, a comprehensive update to their music production software, following on from its last major release in 2009. The update comes with a redesigned, cleaner and streamlined interface in addition to a series of new features and tools including compatibility with Logic Remote, a new iPad app for mixing music when out of reach of a computer. 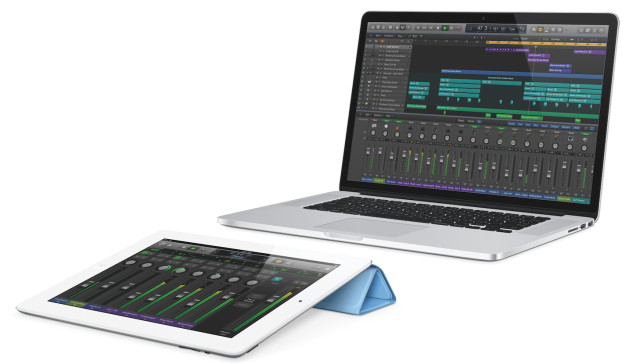 The new design is highly reminiscent of past versions, with rich graphics alongside controls which are instantly recognisable, yet rearranged with new colours and textures. Apple have moved away from the washed out, grey design of past versions, bringing the software closer inline with its video counterpart, Final Cut Pro X. Ease of use has been a massive focus for Apple, who have included larger elements in a new layout to ease workflow. Like previous versions, however, the software is still deep and powerful, with an abundance of contextual menus to dig into complex functions.

In today's press release, Apple pointed out tools which include FlexPitch, allowing users to alter the pitch of audio, and Drummer, which plays along to a song automatically in a variety of styles. TrackStacks is a new organisation tool for collapsing tracks into each other to save space and declutter a project, and Smart Controls allow parameters to be tweaked with little need for skill. Existing instruments have also been improved with more customisability and settings.

The aforementioned iPad app, Logic Remote, is reminiscent of the existing Garageband iPad app, but seems to be more powerful, and may be useful for solo musicians who can't access a computer or controls when recording - they can now adjust dials, sliders, and sounds from their tablet. A third app, MainStage 3, is an additional app which was also updated and redesigned today. This app is a live performance controller designed for stage events.

Logic Pro X is our most powerful version yet, with advanced tools and a modern new interface designed to streamline the process of creating professional quality music. Musicians are going to love creative new features like Drummer, Flex Pitch, Track Stacks and the Arpeggiator.