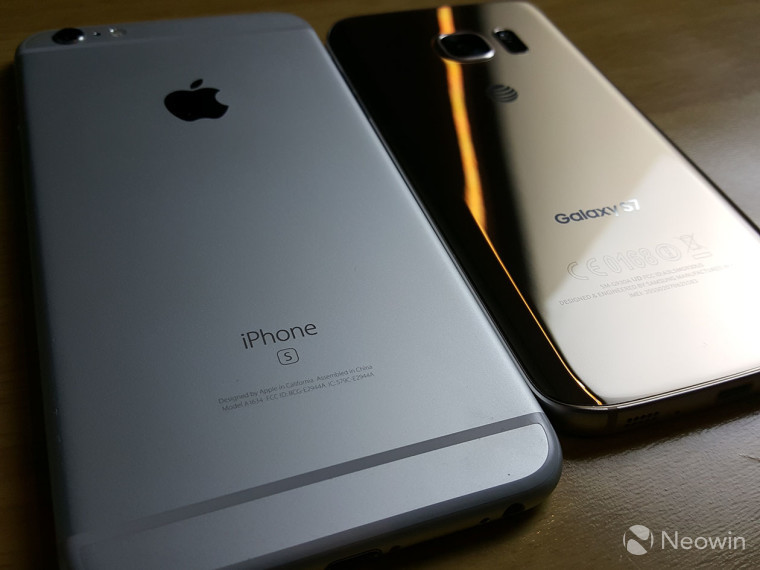 Technology enthusiasts can debate for hours on end about what the best smartphone on the market is; however, if we judge by consumer interest, the two best phones are widely considered to be the iPhone 6s Plus and the Samsung Galaxy S7. Here, we're going to find out which one is better.

When it comes to the display, Samsung always wins. They really just make amazing AMOLED displays and they're not joking when they call them Super. 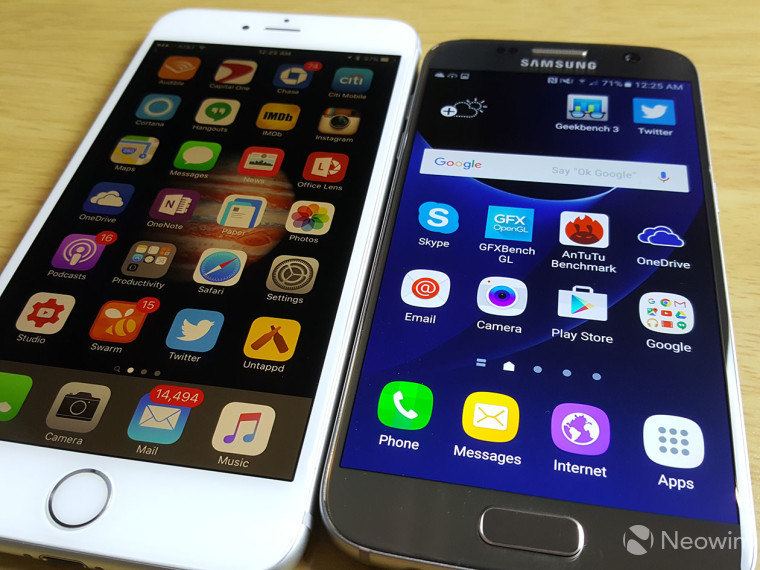 There's one thing that I do want to note about the display: the Galaxy S7's display is not better due to the higher resolution. Colors in an AMOLED tend to be more vibrant and there are true blacks, due to the fact that pixels can be turned off. Samsung is also amazing at color accuracy.

While AMOLEDs have their advantages, LCDs have more longevity. The LCD that Apple uses might not match the AMOLED that Samsung uses, but it's a pretty darn good one. Apple uses a pretty powerful GPU as well. We'll talk about this more in benchmarks.

Samsung also is promoting the new "Always On Display". While the feature is nice for someone that likes to check their phone for the time, it does use the battery a bit. Overnight, it seems to use about 10%. Sadly, the Always On Display is just that, always on.

Most handsets that have some sort of similar functionality at least have the option of setting it to turn off after a few seconds, or only come on when the phone detects that it's being picked up or that the lighting has changed.

The battery usage of the Always On Display is notable because Android Marshmallow picked up a feature called Doze, which allows the device to use almost no battery when not in use, something that the iPhone has handled for years. This new feature on the Galaxy S7 is counterintuitive to Doze. 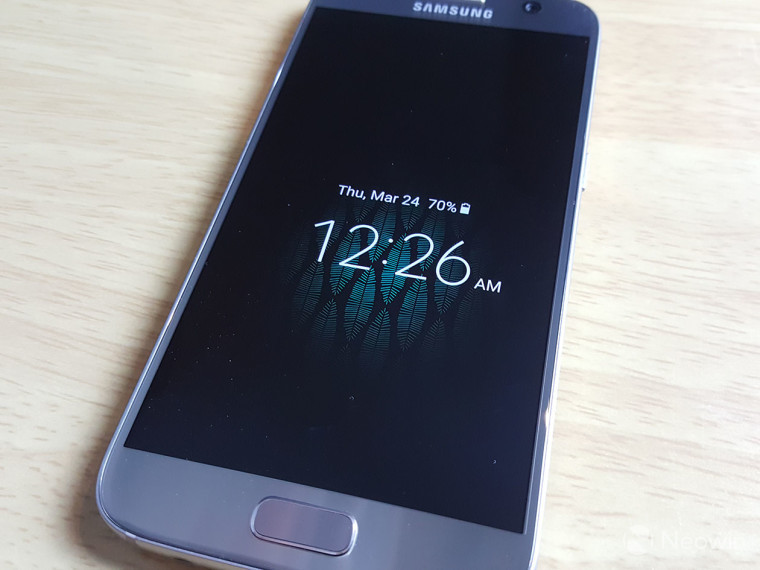 The other option is for it to be always off, as the feature can be disabled in Settings. Still, it would be nice to have an in-between.

As far as the design of the bodies of these two devices, that's all a matter of preference, as they're both stunning phones. The Galaxy S7 is probably the better looking of the two with its mirrored glass back; however, the pitfalls of a glass back could mean a broken phone. In a less severe note, it also tends to gather fingerprints.

The iPhone 6s Plus shares a design with last year's iPhone 6 Plus, but it's heavier by 20 grams. When you begin approaching 200 grams, the phone starts to become uncomfortable to carry.

One gripe that I've always had with the Plus model is that while it's big, it's also flat, making it fairly uncomfortable to hold. The Galaxy S7 doesn't share the design of the Galaxy S6, but rather a miniaturized Galaxy Note 5, the curved edges of the back panel making it easier to fit in the hand. 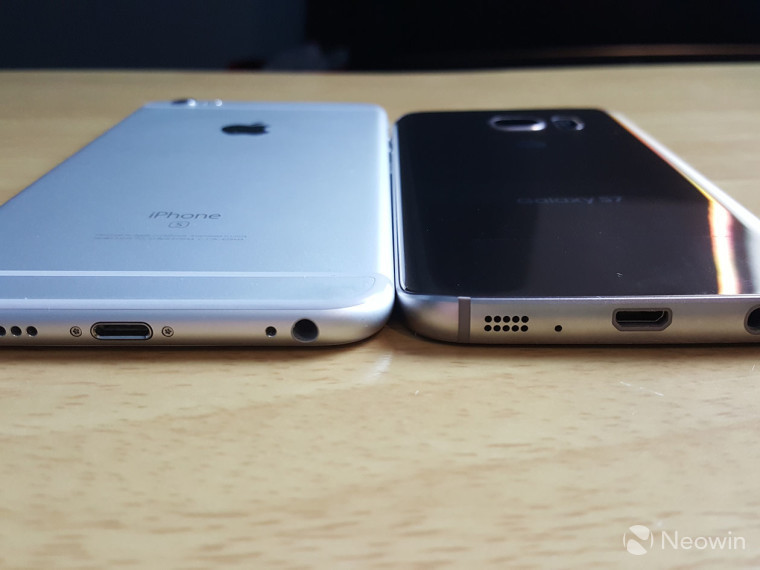 The Samsung Galaxy S7 has been called the best smartphone camera to date. While I can't promise that, I can promise that it's pretty darn good.

One area where Samsung really beats the iPhone is in the Camera app itself. Apple provides its standard features, including camera, video, time lapse, slo-mo, Live Photos, HDR, and a timer; Samsung provides much more.

Samsung provides just about everything you could want in a Camera app, and probably some things that you don't want. There's a Pro mode, which gives the user some manual control, something that I couldn't even imagine Apple doing. Users can also live stream to YouTube directly from the camera app.

GIFs are a standard file format. While Apple users cheered on when Facebook finally implemented support for Live Photos, GIFs are already supported just about everywhere.

The Samsung Galaxy S7 definitely does better at night; however, the iPhone seems to handle bright lights at night better.

When Samsung announced the Galaxy S7, they made a big deal about focus pixels. They made it a point to say that this new flagship uses 100% focus pixels; meanwhile, the iPhone 6s uses a lowly 5%. They even backed it up with a video that they took. I did my own test.

As we can see, the Galaxy S7 most definitely does not focus faster than the iPhone 6s Plus.

To be fair, the iPhone camera generally defies all logic. It uses a 1/3" sensor and an f/2.2 aperture, so there's nothing really large there that will let in a lot of light; however, its low light performance has always been amazing. Despite competitors using phase detection autofocus (and apparently, better PDAF hardware), it still focuses better and faster than anything else. It's also always been one of the fastest cameras on the market.

Then again, Apple has never been one to focus on specs. They tend to use the specs necessary to deliver the experience that they're trying to achieve.

tl;dr
Rear camera: pros and cons on both sides. Draw.

Both of these devices use 5 MP front cameras. They also both light up the display to be used as a flash. One major difference between the two is that the Galaxy S7 records 1440p video from the front camera and the iPhone 6s Plus only records 720p.

One thing that's always bothered me about the iPhone's front camera is that the photos it takes require some work to actually be sharable. For example, to create this gallery, I needed to open these photos in Photoshop and simply save them; otherwise, they would have shown up in your browser upside down. If I had simply rotated them, they would have shown up upside down for iOS users. This has been an issue with the iPhone front camera for as long as I can remember.

I think it's clear that the Galaxy S7 had the superior front camera. The iPhone's front camera is very disappointing in low light shots, even with the flash.

A fingerprint scanner is becoming more and more important in a phone today. Just about every phone that matters has some form of biometric authentication and these things are getting pretty good at their jobs.

If there's one area where the iPhone 6s Plus clearly beats the Galaxy S7, it's the fingerprint reader. When an iPhone 6s Plus user presses the home button, the screen unlocks. Touch ID 2.0 means that there's no more holding your finger on the button and waiting.

The Galaxy S7's sensor seems to be the same one that the firm has used since the Galaxy S6, which is about on par with older iPhones in terms of speed. In terms of accuracy, it doesn't even come close to Touch ID.

I'm not a fan of benchmarks. They rarely provide any insight into real world usage. I provide them because people want to see them; however, I would highly discourage you from making your purchasing decisions based on them.

I can even show you why. First up is AnTuTu Benchmark. AnTuTu recently performed a complete overhaul of their app, bringing it to version 6. With the former version of the app, the iPhone 6s Plus would obtain a score of around 60,000 while the Galaxy Note 5 would earn around 70,000. The new app has a new scoring system. Before you look at the results from these two devices, note that the new app scores the Note 5 at 81,412. 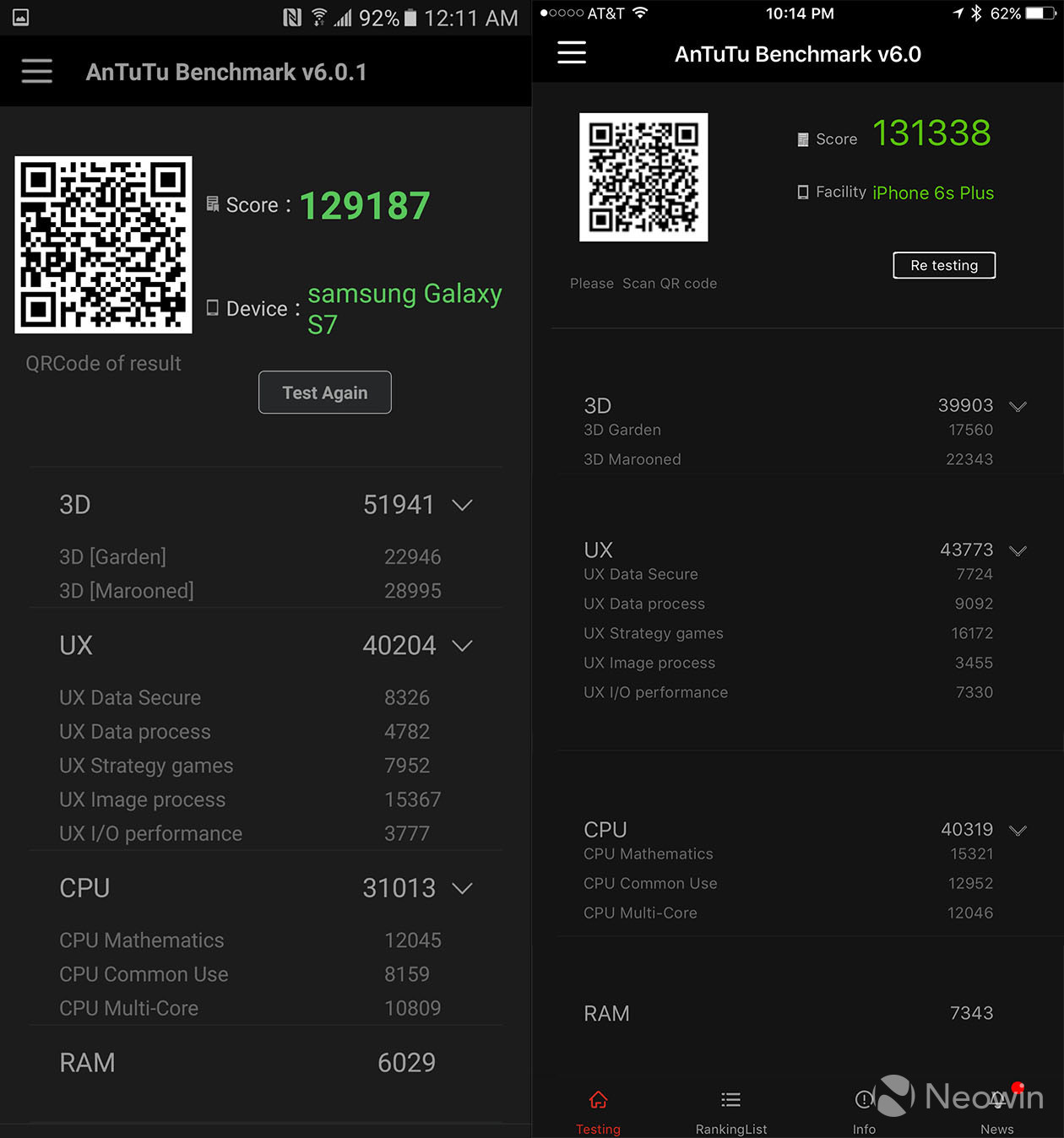 Before we even discuss what we're seeing here, note that the new score for the iPhone 6s Plus is over 130,000. This is why it's important to not put too much stock into benchmarks. With an app update, the iPhone 6s Plus went from being inferior to the Galaxy Note 5 to smoking it.

From these tests, we're seeing the iPhone win in everything except for 3D. This is interesting because we'll see different results going forward. Next up is Geekbench 3. 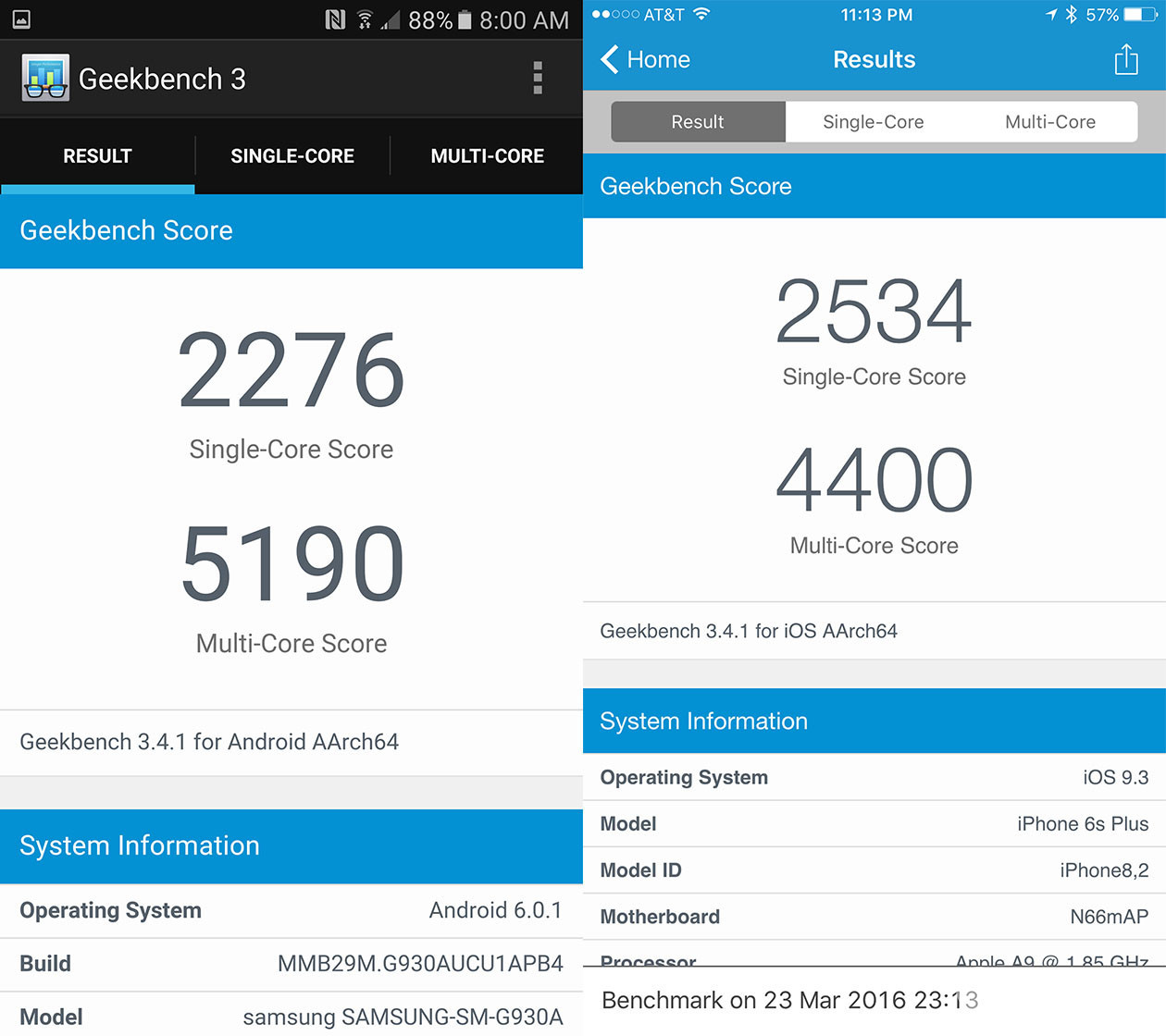 The iPhone has the single core score, as is almost always the case. Apple designs really good chipsets. This fact should speak for itself in the fact that Apple was smoking its octa-core competition with dual-core chips last year. Since this is our first test with a Snapdragon 820, it's good to see Qualcomm back in the race with an exciting offering, as last year's were unimpressive.

Also, note that I used the best scores that I was able to get with both of these devices. Had I picked and chosen which ones to use, there could have had an entirely different outcome. In other tests, the Galaxy S7 scores 1896 in single core and 3988 in multi-core. iPhone tests would go as low as about 2400 in single core and 4200 in multi-core, so this should show just how much each of these phones can vary by outside factors, such as how hot the phone is or if other applications are running in the background.

Next up is GFXBench, which is renowned for testing the GPU. This is a tricky area, as the Android version is at 4.0 while the iOS version is at 3.1. Luckily, version 3.1 is still available in the Google Play Store if you know where to look. To be thorough, I'll show both results. 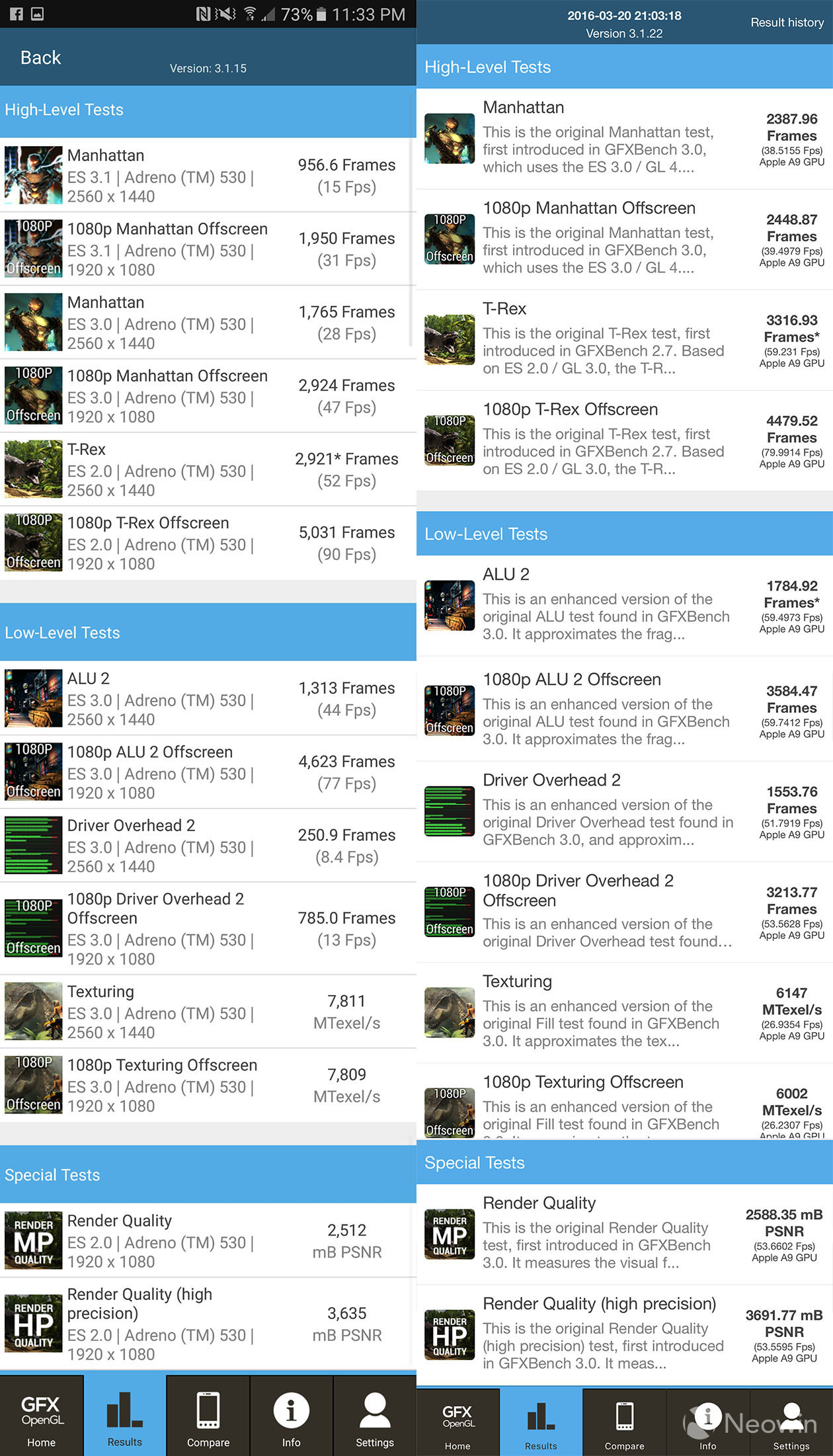 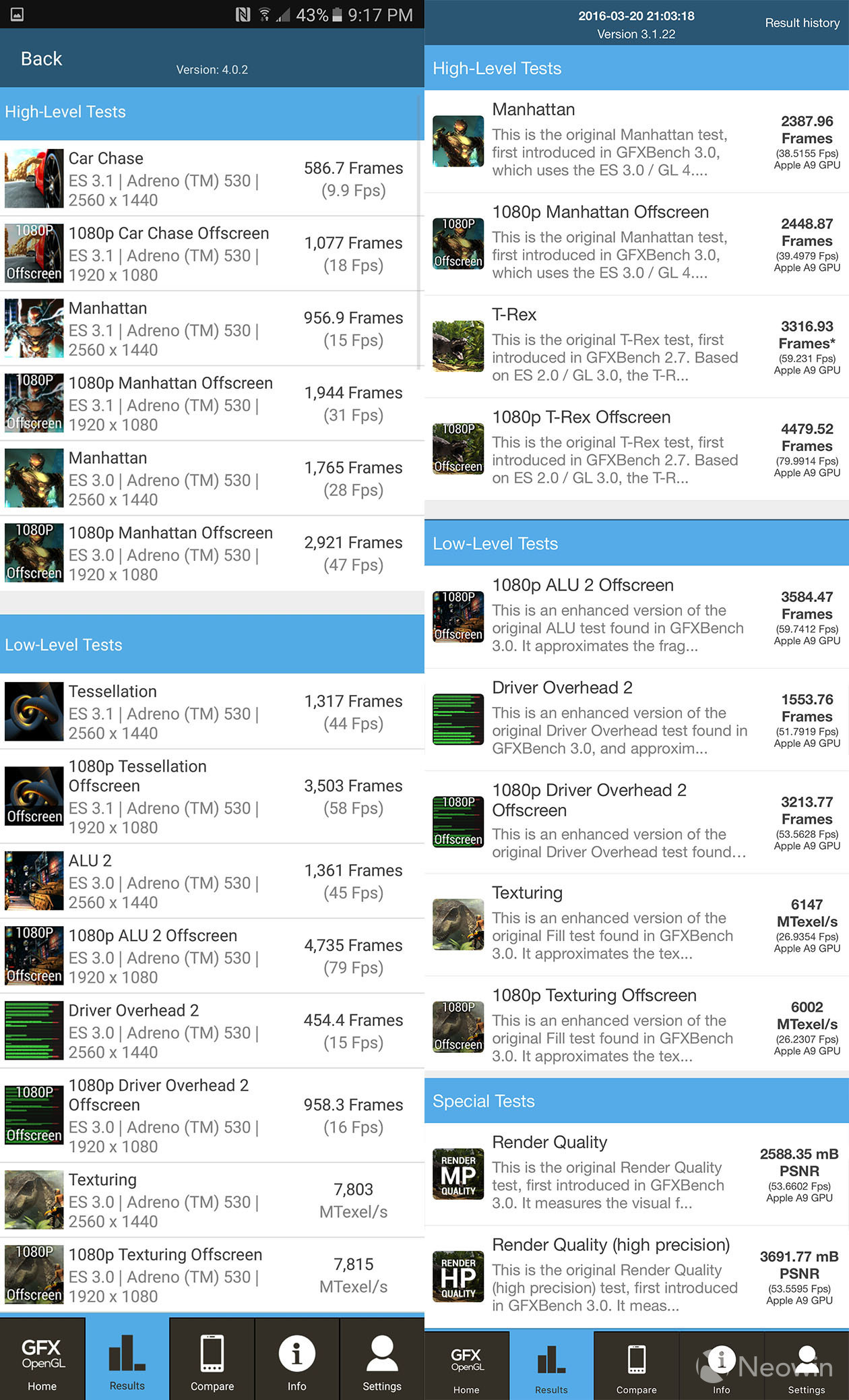 The results here are very interesting. You'll notice that in just about every case, the iPhone wins the regular test and the Galaxy S7 wins the 1080p offscreen test.

So what does that mean? In short, it means that the Galaxy S7 has the superior GPU but it's hindered by the higher resolution display, resulting in inferior overall performance.

I truly don't believe that any normal person can tell the difference between 1080p and 1440p on a device that size. A 1080p display is about 2.1 million pixels and 1440p is about 3.7 million, so the higher resolution display is much harder on the GPU without providing any real advantages.

1440p displays were one of the reasons that devices in 2015 weren't as impressive as they should have been; however, it would seem that this year, the Adreno 530 that comes paired with the Snapdragon 820 has finally caught up with the needs of such a display.

Note: the one advantage to a higher-resolution display is virtual reality. If you use a Google Cardboard or Samsung Gear VR, a 1440p display will certainly provide some real advantages. 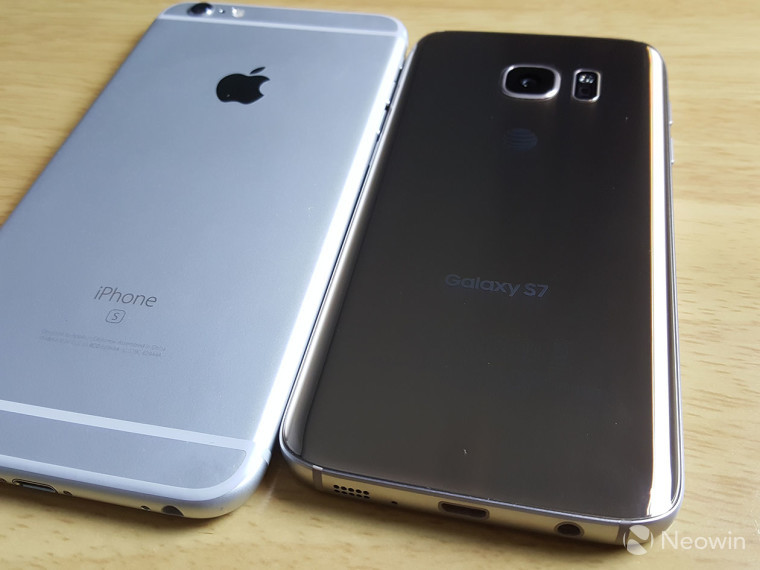 For many users, choosing between these two devices is as simple as your preferred OS. For example, if you prefer iOS, then everything above is totally irrelevant.

Do with this information as you will. All users have different priorities, so choose between these two devices according to those priorities.

While both devices are very strong offerings, if I had to choose a single winner, it would be the Galaxy S7. After all, the beautiful display and better front camera, as well as being on par with the rear camera and the design of the body, give it that extra edge to put it over the top, pun intended.