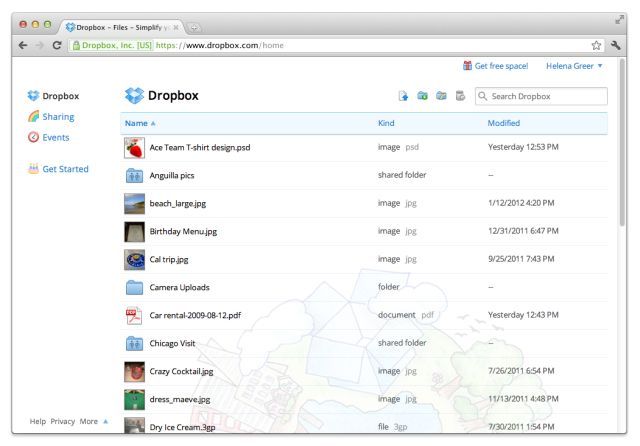 The web-based file sharing and storage service Dropbox has just launched a big revamp on its web site, adding some new features and improving some existing ones. Users of Dropbox should be able to see the new user interface shown above when they sign into their account.

Dropbox's blog site has more information on the changes and additions. It begins with the new action bar which can be seen above your Drobox files. It features a number of actions that allow users to sort their files by their name, the date the file was uploaded, the file's size, and the type of file.

Selecting a specific file or folder will change the action bar to activate a number of actions such as copy, delete, rename and more. You can also bring up those actions by right clicking on a file which brings up a menu.

Dropbox has also added a new viewer to better check out the pictures and videos in your file storage space along with thumbnail support. The new UI also features an improved search feature.

The blog also talks about other new features added in the revamp, stating:

Our new drag-and-drop makes moving stuff as easy as on your desktop. We’ve also replaced the checkboxes on the page with better multiple file selection (click-dragging works!). And for all you power users out there, we’ve added keyboard shortcuts to make mouseless browsing a breeze — just hit ‘?’ for a full list.

Dropbox hints that even more changes and improvements are in the works for the next few months.