Piracy, illegal file sharing, or whatever you choose to call it, isn't a problem that can (or should) be solved by modern-day witch hunts and draconian censorship policies like SOPA (Stop Online Piracy Act). Doing that ends up creating legal precedents that can lead to far more dangerous kinds of censorship. The only way to stop piracy is to start at the root cause: the networks and studios themselves.

It's not hard to understand that they would want to protect their business. But the ways they go about doing it are downright stupid. Rather than trying to adapt to new innovations and changing markets, they keep trying to hold on to the past, and they want to pull you back with them. They've been playing this game for a long time. Hell, if it was up to them, there would have been no VHS, no cassette, no internet... well, basically anything that's been invented since the '60s. Bills like SOPA are just more hopefully futile attempts to hold back society and technology.

For example, we recently reported that shows from premium cable networks, like HBO and Showtime, suffer from piracy far more than network shows. It just so happens that these networks have one of the most archaic business models of all. Charging a subscription to access all of your content, large portions of which are crap, is as dead a business model as the vinyl album.

Networks have the same problem, but they've been far more flexible in adapting to new technology. By making their content available on portals like Hulu soon after it airs on TV, they brought a ton of pirates back into the fold. People aren't pirating because they think it's cool, they're pirating because it's the only feasible way to see something. If you're in one country and want to see a show from another without waiting years, BitTorrent is the only way.

When Fox decided to delay the Hulu release of some of their biggest shows, guess what happened? Piracy went through the roof. The trend that emerges is that studios are driving people to piracy because of their inflexible business models. For better or worse, the world is a different place than it was ten years ago. The digital revolution kicked into high gear back then, give or take a few years, and we're spoiled; we want what we want when we want it, on the screen that we want it on.

Just by looking at the comments that some of our recent stories got, there are a lot of people out there who are happy to, maybe even prefer to, pay for their content. I'm willing to bet that if the networks would be more open to timely digital distribution, that they would see their profits increase and piracy decrease. 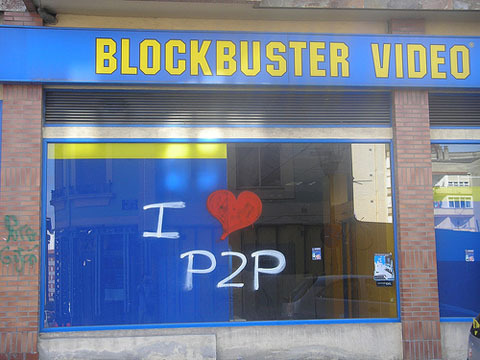 If they want to make sure , they can sweeten the deal by adding some exclusive content to the digital versions. Heck, by doing that, they might even get repeat profits when TV viewers tuned in to see the extras.

And keep in mind that I said increase their profits, not salvage. Despite their struggles with piracy, most studios and networks continue to be profitable. Actually, they're making way more money now than they were before file sharing took off. According to The Raw Story, a recent study by the nonpartisan CRS (Congressional Research Service) found that:

That, my friends, is all that you need to see in order to grasp just how out of touch the studios are. Netflix IS good for them. Even if it does have a negative impact on some people's jobs, that's only looking at the short term. The economy changes constantly as new industries rise and old ones die. I'm sure that many people have lost their jobs as a result of the music industry's shift to digital media, but it was ultimately a good things. Those jobs will be replaced and even expanded by new ones. It's like the carriage industry trying to ban cars! Short term discomfort is not a reason to try and hold the industry back. That's just going to make the changes that are inevitably coming all the more painful.

On the other hand, this doesn't mean that piracy isn't hurting them. Even though they are still making money, they probably would be making more if it wasn't for piracy. It might be greedy, but, for better or worse, that's what our society is built on. I see a lot of people complaining about the studios being greedy, the record labels even more so, and how they wish they would go out of business. That makes sense when they do something stupid (SOPA comes to mind), but it's incredibly short sighted.

The Swiss government's decision to do nothing about piracy is almost admirable and troubling at the same time, the rationale being that piracy doesn't seem to have impacted anyone's profits. While this may be true, it probably has impacted their growth to some extent. Our economy depends on this growth to drive it forward, and revenues should change with inflation as well. It's impossible to be sympathetic to the film or recording industries, though, because the tactics they choose to employ are absolutely abhorrent.

Now, I can't help but bring a little pet peeve into this. The fact is, like it or not, we need them. I had a conversation with a guy once who said that there would still be 'art' if we didn't have record labels and film studios. Sure, there was good music before there were record labels, but it generally wasn't recorded. There was no one to record and distribute it. Film, on the other hand, has always been commercial.

Movies are very expensive. If it wasn't for the film studios, then the highest quality film production you could expect would be the latest viral craze on YouTube. If no one paid for their entertainment, then there would be none. Art, maybe, but most of the things we enjoy are hardly 'art.'

Now is a critical time, as the movie studios and TV networks find themselves in the same situation that the music industry found itself in at the dawn of the millennium. Now is the time for them to make a choice: adapt or die.