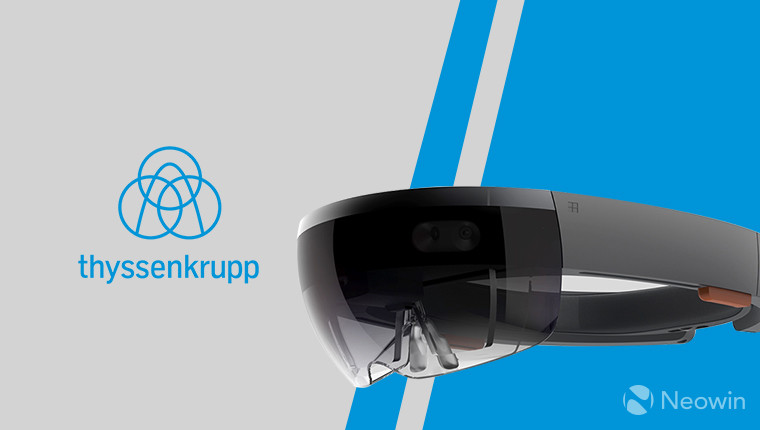 After last year's announcement that German engineering firm thyssenkrupp would equip 24,000 of its technicians with a HoloLens device, Microsoft has now chosen to highlight another related sector in which the two companies have collaborated.

In a post on the Devices blog, Lorraine Bardeen, General Manager at Microsoft HoloLens and Windows Experiences, emphasized that with the kick-off of the Hannover Messe convention in Germany (the biggest engineering-focused event in the world), Microsoft has elected to spotlight its further collaboration with thyssenkrupp.

While last year's announcement was focused on elevator maintenance and how the technicians can "visualize and identify problems ahead of a job, and have remote, hands-free access to technical and expert information when onsite", this announcement focuses on the manufacturing side, and how it can be streamlined.

To help customers with physical disabilities, thyssenkrupp, among its varied portfolio of products, also creates stairlifts, which need to be customized according to the dimensions of each set of stairs. A lot of time is lost during the process of measuring then sending the required data from the site to the manufacturing plant. In the video below, the firm shows how it has made the process more efficient via use of HoloLens:

Before integrating the AR device's self-contained capabilities and the Redmond giant's Azure cloud platform, thyssenkrupp had used the same manufacturing process for nearly two decades, a process which involved a complex system of labels, cameras, and manual data entry to ensure the "mobility systems" were made to spec. This meant the delta between placing the order and the product actually showing up would be quite long. With this new approach, the firm says that delivery times have been reduced by as much as four times.

Not only is it easier and faster for the engineers and technicians to start manufacturing a specific order, but the customer can also get a visualization of how the stairlift will look in their home.

Another equally important aspect, buried at the end of the post, was that Microsoft's AR solution has been found to conform with "basic impact protection requirements of ANSI Z87.1, CSA Z94.3 and EN 166, the most common protective glass certification standards" in both Europe and North America. To emphasize the potential of the device, Lorraine Bardeen has also pointed out a small presentation video:

The future does seem bright for the augmented reality headset. However, given that only the Developer Edition of the device is currently available for a steep $3,000 price tag, and the next version is rumored to be coming nearly two years from now, it will be interesting to see how Microsoft positions HoloLens in the future.