Android 2.2 (Froyo) is officially rolling out for EVO 4G owners, and it’s even a little early. Engadget is reporting that users have begun getting the updates a few hours prior to the promised 3 August update date (although it’s midday in Australia).

Apart from Android 2.2 (which brings various improvements – including the ability to install applications to removable storage), the update also brings various updates and fixes including a nifty little flashlight application – which is sure to come in handy for some people, and will provide momentary amusement to others. Other Android 2.2 notables include: voice dialing, USB tethering, Wi-Fi hotspot functionality and support for Adobe Flash 10.1. 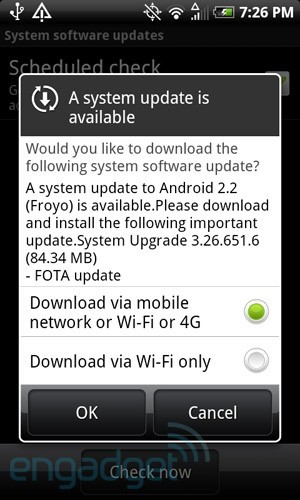 For those of you that manually downloaded the premature, and quickly removed update last week – you won’t be in the “over-the-air update loop”. HTC promises to get you the update in the coming days, yet it's unclear yet as to whether that update will be over-the-air or

Have you received the update for your EVO yet? If so, tell us how it's going in the comments below!