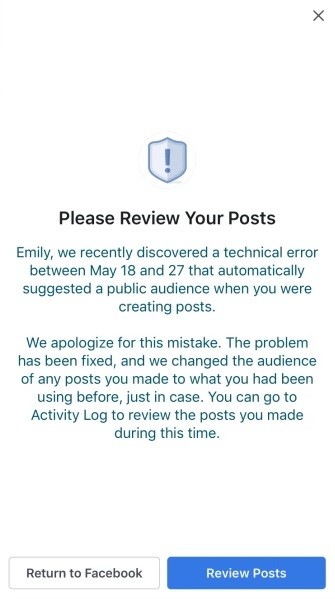 After 87 million users were affected by a recent data breach involving Cambridge Analytica, Facebook may have inadvertently changed the visibility of users' posts in another blunder. The social networking site is now alerting approximately 14 million users to a recent bug that caused the error, which altered their suggested privacy settings to public from whatever audience they had previously chosen.

The alert is being sent via Facebook's drop-down notifications menu, asking users to review the audience of their recent status updates in order to restore their previous privacy settings. It was found that the bug occurred between May 18 and 27, which automatically suggested a public audience when a post was being created.

According to TechCrunch, the bug came into being after Facebook developed a “featured items” option meant to highlight photos and other content, which were visible to the public. However, that setting was unwittingly applied to the new posts of affected users. The bug did not affect status updates created before the technical error surfaced.

The bug has now been fixed and the status composer is now back to its previous privacy setting. If you're one of the affected users, go to your notifications and check for the alert, which includes a roster of links to your potentially affected posts.