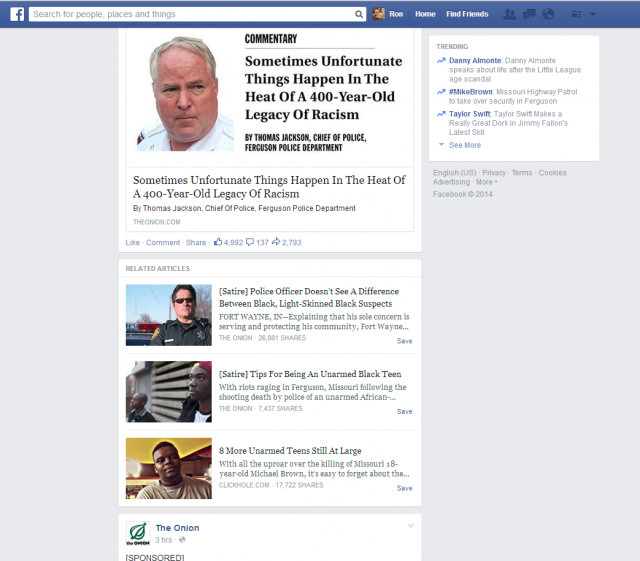 With its first publication all the way back in 1988, the parody news outlet The Onion has been producing articles and headlines such as "Scientific community baffled by man whose waist 32 with some pants, 33 with others" and "A police officer doesn't see a difference between black and light-skinned black suspects." Of course none of the stories are real and, at best, they poke fun at real news. For most people, The Onion and similar parody sites are quickly identified and taken for what they are-- humor. Unfortunately this isn't the case for everybody and some take an "if its on the internet, it must be real!" approach to things, often having some very bizarre reactions.

In order to address this issue, Facebook is now testing a new "satire" tag feature for news articles coming from satirical websites in order to curve those who are gullible or caught off-guard into thinking that the articles are legitimate news. The way it works is that if you click on an article from a flagged satirical site, once you return to Facebook it will show a "related articles" box under the link. The related articles all have "[Satire]" (without the quotation marks) prefixed to the titles. 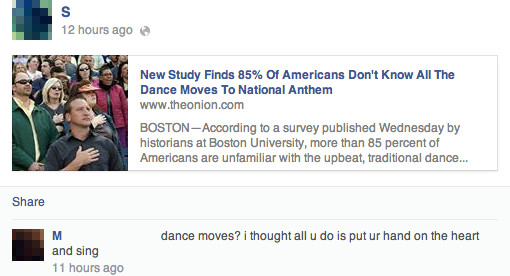 The official moves are actually a faster version of the Macarena dance.

The implementation itself is confusing in its limitations, as Ars Technica reports that while the "related articles" box has the tags, the original postings don't, and The Onion's sister-sites such as the Buzzfeed-spoof Clickhole do not have them either.

A Facebook representative issued the following statement to Ars Technica regarding the testing:

"We are running a small test which shows the text '[Satire]' in front of links to satirical articles in the related articles unit in News Feed. This is because we received feedback that people wanted a clearer way to distinguish satirical articles from others in these units."

Focusing specifically on The Onion, blogs like Literally Unbelievable seek to curate the social media responses of victims to the satirical news, often featuring hilarious outbursts of raw emotion and confusion.