Last year, the number of smartphone shipments worldwide exceeded one billion annually for the first time, and all indications point to that number going up again by the end of this year. The smartphone market is changing considerably - manufacturers like China's Xiaomi are rising at the expense of the likes of Samsung, while BlackBerry's share of the market has completely collapsed, predicted to end this year at just 0.8%.

Windows Phone isn't faring much better in raw percentage terms, at around just 2.5% of the worldwide smartphone market. But it is at least showing signs of life, with many major new apps being launched in recent months. Of course, we all know that Android is the most popular platform among users, with around 85% share, followed by iOS, and then Windows Phone in a distant third. But what are smartphone buyers actually spending on their devices? 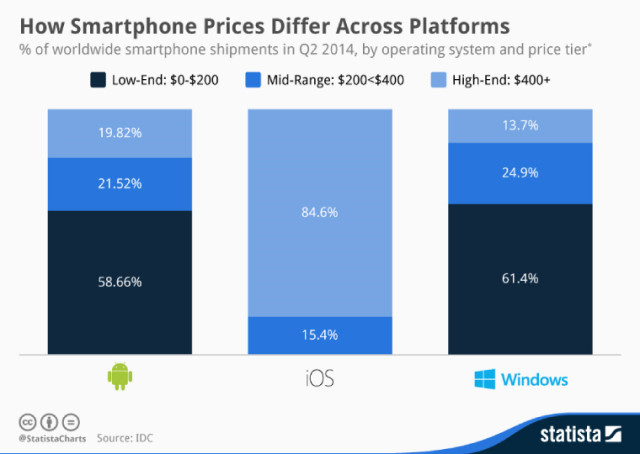 The chart above shows how handset sales are broken down by price category for each of the top three smartphone platforms, according to data provided by industry analysts IDC for Q2 2014.

For both Windows Phone and Android, the majority of sales are in the low end, with 61.4% and 58.66% respectively of each platform's sales made up of devices costing under $200 at full price. iOS, of course, has no devices on sale in this category - as Statista notes, the cheapest iPhone on sale remains the three-year-old iPhone 4S, which still costs $450 off-contract. However, the overwhelming majority of iPhone sales are in the high-end category, costing $400 or more, with the remainder likely being made up of international sales of older, lower-cost devices.

So what are the key takeaways from this? On the Apple front, there's nothing new. We already know Apple enjoys huge profit margins on its devices, and that most of them come with a very big price tag.

However, it is interesting to see how much more successful Android is in the flagship space than Windows Phone. Likewise, it is worth nothing that, despite many Windows Phone fans perceiving the platform as a more 'premium' offering, it relies more on low-cost and mid-range handset sales than Android does.