It's one of the most downloaded and used apps for the iPhone and iPad but now Facebook has launched a major new update for the iOS version that it claims is much faster than before.

The new 5.0 version of the Facebook iOS app is now available to download from the iOS app store. In a press note, Facebook says, "Facebook 5.0 for iOS is twice as fast as the previous version when launching the app, scrolling through news feed and opening photos in feed." 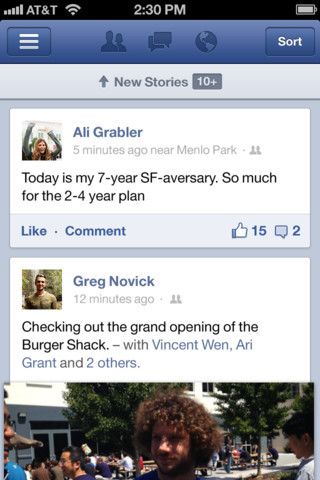 Facebook claims it has done a complete overhaul of their iOS app for better overall performance. It states, "As you scroll down your news feed, all your friends’ stories appear faster than ever. A banner lets you know when new stories come in, and you can tap once to immediately see the latest updates." In terms of viewing photos on iOS devices, Facebook says, "Tap on any photo and it opens right away. Pull down to close it with a single swipe."

Android-based device owners can also download an updated Facebook app today via Google Play. While the new version doesn't appear to have all the speed boosts in the iOS app, the Android version does add the ability to put in photos and emoticons into messages. It also lets users create and share events with others. The sharing of photos is also faster due to  "a new upload flow" in the Android app.