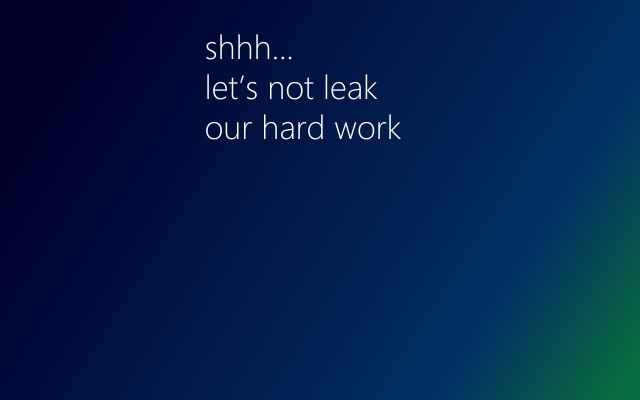 Kind of an ironic wallpaper, click on it for a larger image.

Yesterday the notorious Russian leaker WZOR confirmed that he also has both x86 and x64 versions of Windows 8 Enterprise RTM and that they would be leaked to the web, with the "Pro" versions "to be released soon" as well, both x86 and x64 of that edition would also be offered.

These leaks are different in that they aren't "N" editions that have Media Player stripped out, and are supposedly "untouched" (bootable) images from Microsoft. The previous Enterprise "N" leak wasn't bootable and had a key embedded into the installer by the leaker.

Canouna of WinUnleaked also went as far as to confirming the news just over an hour ago on Twitter.

This follows yesterdays news of the Windows Server 2012 leak, and Thursdays news of Windows 8 Enterprise "N" being made available just some 24 hours after Microsoft handed over the bits to OEMs.

Microsoft has had an impressive, unprecedented record with Windows 8 testing, almost no internal builds leaked online during the test phase, maybe due to variations of the above wallpaper, who knows?

We like to think that the three Preview offerings to the public went some way to making sure internal builds were less important to leak, or maybe because the test group was that much smaller than that of previous Windows versions.

For those willing to wait until August 15th (if you have an MSDN account), you can still download the Release Preview and upgrade to the RTM (apparently) when it becomes available for download; or you can whet your appetite with this video walk-through of the leaked RTM.