In celebrating the launch of Steam for Mac today, Valve Software has put out an enticing promotional campaign differing from their usual free weekends for content pack updates to their other games, such as Team Fortress 2 and Left 4 Dead. This time, they will offer Portal for free, for everyone to keep forever, as long as they respond by May 24. Both Windows and Mac OS X gamers can once again play the much loved puzzle shooter of 2007's The Orange Box that has won nearly 70 Game of the Year awards. 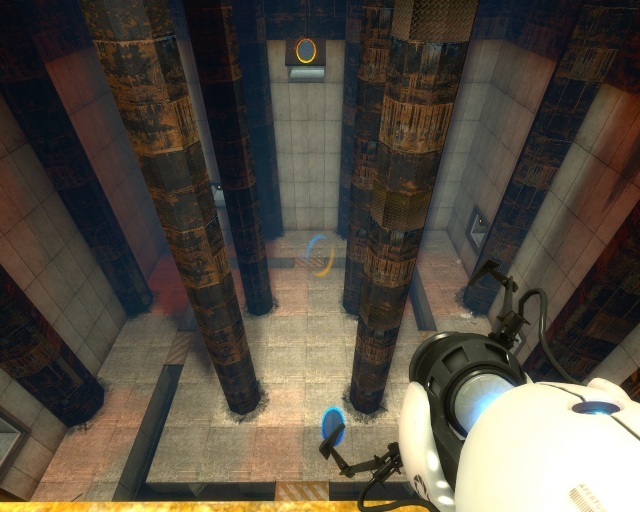 Example of Portal game mechanics: Jump onto the blue portal, and you'll fly out of the orange portal.

Portal is a first person puzzle shooter that allows players to control a "portal gun," more appropriately named the Aperture Science Handheld Portal Device. The players are "lab rats" guided by a mysterious voice known as GLaDOS who seemingly offers helpful advice to the player, but ultimately exposes much sinister motives as the game progresses. Players create "portals" that are used to transport themselves or any objects from one point to another, as they work through the Aperture Science facilities to solve puzzles. The game's official trailer gives a nice quick overview of the game's mechanics:

To get the game, simply download a copy of Steam if you haven't already, and visit the landing page on Steam.

Thanks to LOC for the heads up on the forums!