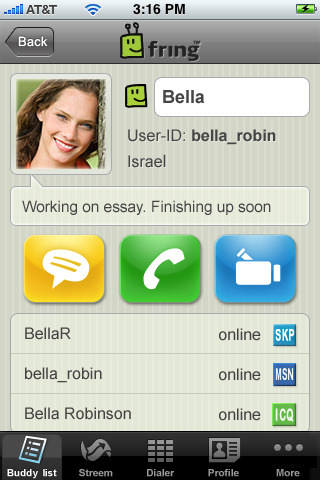 When Steve Jobs announced the video chat capabilities of the iPhone 4 with its front facing camera, the Apple world was stoked. When he announced that the proprietary video chat app, Facetime, would only work over a WiFi connection, a collective groan could be heard. The blame fingers were pointed in every direction, but the reality stayed the same. For the time being, video chat only worked on a Wifi connection, which, for most people, means indoors somewhere.

With the release of the new version of Fring at the iPhone App Store, Apple users are no longer shackled to WiFi for video chat. Fring is a free third party communications app, much like Skype, that lets you call friends with Fring or Skype accounts over an Internet connection, using VoIP, without using minutes. It also happens to do video chat. Android users, especially HTC EVO 4G users, have been using Fring for video calling as a replacement for Qik, the video chat app that shipped with the phone, because Qik only does video. However, Android users were never bound to Wifi connections for video calling, so this release is a little more momentous for the iPhone 4 crowd.

It remains to be seen if AT&T plans on crippling the functionality of Fring. If they couldn’t handle the bandwidth challenge that Apple posed with Facetime, it’s likely that they won’t be very happy with the release of Fring. According to 9to5mac, AT&T is rather infamous for doing away with apps like Google Voice, that allow users to make VoIP calls without using minutes. There has been no response from AT&T as of yet.