Not too long ago, there was a bug on Facebook that allowed applications to be installed on your account without your authorization.   Facebook claimed that they had fixed this bug, and that users needed to remove any unauthorized applications themselves.

Over the past few weeks, we have received a couple of tips from Facebook users reporting that unauthorized applications were again being installed on their account.  One forum member, Sais Shishir Ks, alerted us again of the issue and the banter is becoming harder to ignore.

Below is a screen shot of his application list where he claims the top 4 applications were unauthorized.  Having applications added to a user’s account without authorization could allow for unwanted information to be captured and used in ways the user does not desire. 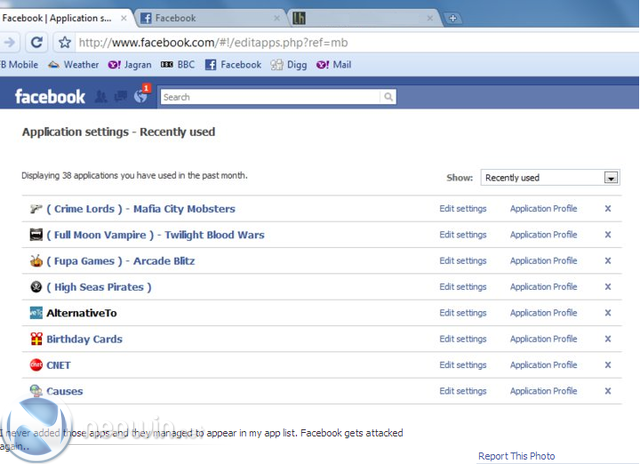 The last time this occurred, a user went to specific websites whilst logged into Facebook, and an app for the website was instantly added to the user profile. There was no prompt to the user, the Facebook window did not have to be open, and you did not need to be signed into the website which adds the app. But this was just the last bug; perhaps there is a new backdoor way of adding applications to users' profiles without their consent.

If you have any unwanted applications added to your account, let us know in the comments below.