I’ve written quite a bit about keyboards, here on Neowin. You might remember I closely examined the Das Keyboard and Matias Tactile Pro back in 2012, and since then I’ve been keeping a close eye on the keyboard scene as well.

This time, I’m bringing something a little bit unique to the table: prototype eSports keycaps from the folks at Signature Plastics. Yes, prototypes. As in “you can’t buy these”, and I’ve no idea if they’re going into mass-production or not.

While this is formatted like a standard Neowin review, it shouldn’t be taken as such. Due to how these caps were distributed a review would hardly be conclusive. Let's get right into this incredibly niche topic straight away.

My package contained twelve keycaps as opposed to a full set of 104/105, which I had expected due to their pre-production status. This led to me replacing my stock WASD caps, the arrows, and the numbers 1-3 in my numerical row, since this was the most general setup I could come to. It covered the vast majority of games I play, with the only exceptions being the Engineer and Spy classes in Team Fortress 2 requiring 4 and 5. Luckily, I don’t play either class much.

The combination of standard Das Keyboard caps and the eSports Prototypes causes a lack of consistency, though. The eSports Prototypes are very low-profile caps designed to remain at the same height anywhere on the keyboard, while the Das uses stepped keycaps to make top rows higher. The issue would extend beyond the Das Keyboard however since most boards follow a profile.

This means the eSports Prototypes sit a few millimetres below the normal Das caps. It’s a very small difference but it’s enough for your finger to hit the side of the standard cap, instead of sliding onto it. This is a minor niggle since the caps are so limited. With a full set you’d never know this issue existed and even with the limited number I have, it's bearable.

Despite the market for these caps being gamers, I’ve used them for typing as well. There are a few primary differences in the caps, and typists could be the first people to pick up on them. Firstly, the caps are not concave; they’re completely flat instead. The reasoning behind this is that gamers might not have the time to hit the key neatly in the middle, so removing the obvious benefit makes everything better. Secondly, the texture’s pretty nice, being reminiscent of a DualShock analogue stick without being quite as textured. Finally, they’re a little bit wider than your normal keycap.

Being wider doesn’t mean they’re thicker, however. They're about the same thickness as the standard Das Keyboard cap, minus the corner strengthening. That means they’re significantly thinner than the red Qwerkeys double-shot cap in the picture, but if everyday use is causing you to break caps you’re using them incorrectly. It’s a complete stab in the dark but with the sidewalls being lower the eSports Prototypes might be a little stronger than the standard Das Keyboard caps. The material used is a factor in this, too. 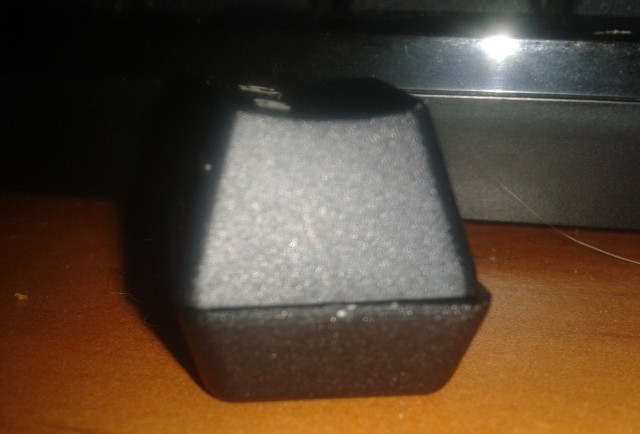 Slightly blurry unfortunately, but you can see the eSports cap on bottom is marginally wider.

I’m not sure what material the eSports Prototypes are made from since the Signature Plastics page makes reference to both ABS (Acrylonitrile Butadiene Styrene) and PBT (Polybutylene Terephthalate) being used. ABS is the most common material, and if I had to guess, the eSports Prototypes aren’t PBT at least. In fact, none of the caps in these pictures are PBT. ABS is common but will go shiny with wear. I intend to see how quickly this happens with the Prototypes and compare that with the Das, so I’ll take some time and test that. 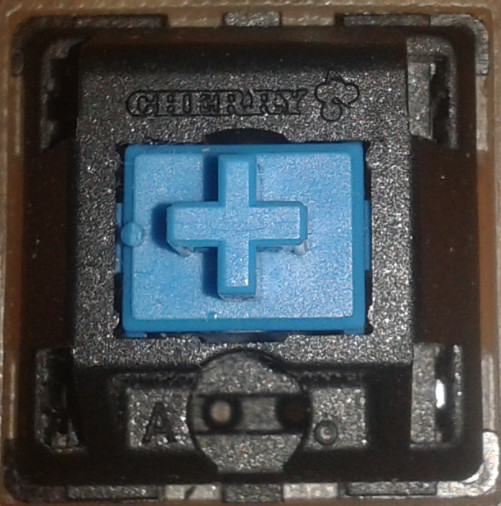 Despite the material being unclear, the sound of the MX Blue switches is a little different under the eSports Prototype caps. They sound a little softer than they do under the normal caps; you could attribute this to the lighter caps bottoming out but generally differences in keycaps will alter the sound a bit. Even the red cap from my pictures, which is double-shot, alters the sound a little bit.

I started into Team Fortress 2 with these keycaps initially. It’s one of my most played games on PC, so being able to jump into something I was familiar with was a benefit. I won’t claim to have suddenly become outstanding at the game, but I’ll say I felt more confident with my movements than I did using the smoothened ABS caps on my Das. Making rapid movements felt more natural due to the lower caps, and it was something I did less consciously as well. It felt more rapid to just twitch around. With a slow class meant to slug out damage like the Soldier it’s not a big deal, but the support was nice when playing a class like the Medic, where you’ve got to move erratically to throw enemies off.

Civilization V isn’t really an eSports game but you do move around the map quite a bit, and I deviate to the arrow cluster for this purpose. It’s not going to do much for you in a turn-based strategy game since you can take it slowly anyway. Seasoned Civilization players tend to click around the mini-map anyway, from what I’ve seen. For a game like this I don’t think your keycap choice would provide any benefit no matter how high level you might be. Nevertheless, I still found the texture nice under my finger as I slid across the borders of my empire, plotting my next military action.

Mount & Blade: Warband is another game bereft of eSports credence, but a sizeable online community means you’ll need to be competitive to stand a chance with some of the more experienced clans. During my time movement felt a little bit crisper but the game’s movement is very loose so it didn’t make a massive difference. Still, the lower profile caps had some impact when tactically moving around to avoid sword strikes in a duel.

Burnout Paradise isn’t exactly a new game. Nor is it a game you can get all the content for since EA dropped the PC version (thanks lads). But still, I bought it for £5 during the Steam Summer Sale of 2012 and, despite being years-old, it’s a cracker. The handling system is fun when you’re drifting around Paradise City but it isn’t always so great. I’ll admit that my fingers slid off keys more frequently in this game than any other and the texture really did shine through here. So too did the wider surface, for I felt like I was hitting the keys properly during somewhat intense moments. Paradise can be a very intense game but the eSports Prototypes were more than up for the job in my experience, though it’s a shame that it too didn’t have much of an eSports following.

The games I’ve used the eSports Prototypes with haven’t been the best reflection of their performance. That might be a good thing, since we know these caps were designed at the behest of high-level gamers. Therefore we can conclude Signature Plastics took the inputs of professional gamers to come to the design they did. But what about your normal everyday gamer, who is simply enthusiastic about using the best equipment they can. Look at games like Call of Duty: you’ll see non-professional players using high-end equipment and that’s not unusual.

Having tested this, I’m willing to say that there’s a valid argument for keycaps like these existing. Professionals demand the best of their equipment, but increasingly, so too do normal players. Regardless of one’s gaming ability, you can always strive for better equipment. And that might be exactly what these seem for you. I didn't notice a massive increase in performance, but this is hardly surprising as I am not a high-level PC gamer.

But are they going into production? Simply put, we don't know yet. Some email correspondence with SP's Bob Guernser shows that the company wants to create ABS and PBT moulds, as well as offering colored caps and versions with marketing. There were only 100 sample sets of keycaps sent out worldwide, though I've been told that response seems quite positive. Bob states that most of the participants have "enjoyed" the caps. We'll let you know what's happening when we know what's happening.