A newly discovered patent for Google Glass has outlined Google's plans to introduce a two-screened version of the hands free computer, allowing the user to see the heads-up display in both eyes. Google Glass in it's current form has only one screen, which it displays in the top of your right eye; Google Glass 2.0 will have two screens allowing for a properly immersive, binocular experience. Sergey Brin, co-founder of Google, is understood to be leading the research for Glass 2.0, highlighting the seriousness of the Glass project to Google.

Currently, Glass is on sale for "less than $1,500", which could mean anything. The New York Times reported that Glass would sell for the price of a current smartphone - around $500 - which leaves a discrepancy in pricing of $1,000. Because Glass is built using new technology, it will cost quite a lot of money - just like any new technology.

The patent, uncovered by PatentBolt, shows a Glass handset which is shaped like a conventional pair of glasses, with two lenses as opposed to Glass 1.0's one. Of course, patent pictures are never accurate, but the general idea - two lenses - will transfer to Glass 2.0. 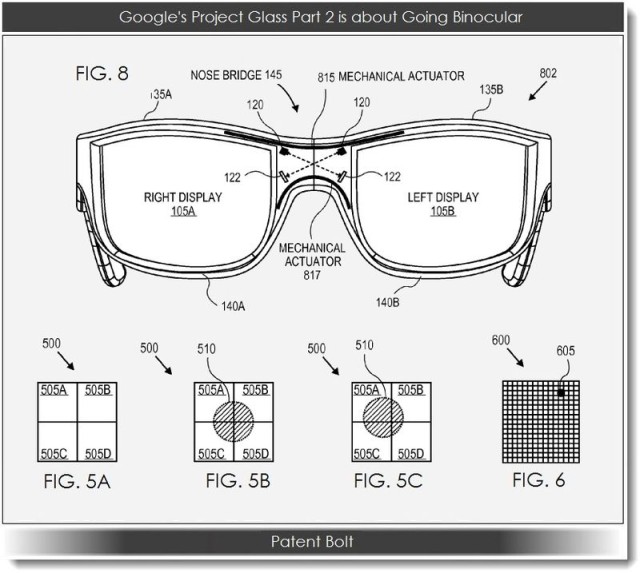 PatentBolt goes on to note that Google will likelyhave some trouble aligning the two projections so they appear as one image. Glass 1.0 only has one screen, which is projected onto from one view point - this keeps the image consistent when viewed from any angle.

Glass 1.0 does not include 3G - as confirmed to us by a Google spokesperson - so it is limited functionality-wise, as you will always have to carry a smartphone with you. The reasons for Google neglecting to include a 3G radio are pretty clear: the technology is just not ready for such a small radio to be fitted into Glass, along with all the other kit.

The patent application includes more images which shed light onto how Glass 2.0 will be designed. We have included the images below:

While Glass 1.0 will likely be very expensive but an impressive piece of kit that is build for early adopters and those who love to take pictures while on a hot air balloon, Glass 2.0 will be a fully-fledged computer right on the bridge of your nose - and that is worth waiting for.