Yesterday, Microsoft held its big hardware event, and it was certainly a big one. Stealing the show was the Surface Neo and Surface Duo, dual screen devices running the new Windows 10X and Android, respectively. Of course, the company also refreshed its existing products, the Pro and the Laptop.

For the first time now, there are two Surface Pro models, the Pro 7 and the Pro X. The Surface Pro 7 is a simple rev on the existing one, packing new Intel Ice Lake processors in a similar body. The one meaningful change is that it now has a USB Type-C port.

When compared with the Surface Pro X, the Pro 7 is just boring. In the demo area at the event, this was evident by the Pro 7 table being nearly empty while the Pro X table was packed. Boring isn't necessarily bad though. The Surface Pro is Microsoft's best-seller, so there's really no need to reinvent the wheel.

And then there's the Pro X, which is said reinvention of the wheel. I'm not complaining. In fact, this is the product I was most excited about. Those that follow my work know that I've been a big advocate for Windows on ARM, and I'm happy to see it coming to Microsoft's hardware portfolio. And the product is a complete redesign, with slimmer bezels, a thin and light aluminum chassis, and more.

And yes, it's made out of aluminum, like the Surface Laptop. I tried asking around about why it wasn't made out of magnesium, as the Pro lineup has traditionally been, and I couldn't get an answer better than, "That's what made sense for this product." Some of the Surface team that was there to answer questions simply refused to talk to me at all.

Speaking of the Type Cover, it has a pen garage now, which will charge the pen wirelessly. It still attached magnetically to the bottom bezel, allowing you to securely store the pen.

It's also worth noting that the Type Cover has new connectors. This is only the second time that new connectors have been used in Type Covers, with the Surface Go being the first product that wasn't compatible with the old ones. In fact, you can take a Type Cover from the original Surface Pro and still use it with a Pro 7, even if the cover doesn't fit properly.

There's a new Slim Pen, as you've probably noticed from the images. It's not round like previous ones; it's flatter. I'm not sure how I feel about it. It definitely feels different to use, so you might want to keep that in mind if you're a heavy pen user. It's compatible with all Surface Pens though, so you can always use a different one, although there would be no way to store a regular Surface Pen with the device.

The Surface Pro X is thinner and lighter than the Pro 7. At this point, you're probably asking why Microsoft didn't use this chassis for the Pro 7, and the answer is that it couldn't. The Pro X has a Microsoft SQ1 (the SQ stands for Surface Qualcomm) processor, a version of the Snapdragon 8cx that's optimized for Surface products. While it's the same die as the 8cx, it has a faster clock speed at 3GHz, supports multiple external displays, and has a 670MHz GPU.

In fact, it solves a lot of the problems that Microsoft had with ARM processors from previous generations, specifically the Snapdragon 835 and 850. The company told me that it wanted to make sure it was compatible with its entire peripheral ecosystem first, and that only came with the 8cx.

But back to the original question, which is why the Pro 7 isn't in the same or a similar chassis. The answer is that it couldn't be done. An ARM processor is more efficient, doesn't require a fan, and can fit into a smaller body.

Another thing that's cool about the Pro X is that you can remove the storage, something you still can't do with the Pro 7. You'll find it behind the kickstand, and it can be removed with a SIM tool. The idea behind this is that you can destroy your storage when disposing of the product, something that can come in handy for businesses.

Naturally, it comes with 4G LTE support as well, another business-centric feature, being that 4G LTE is more secure than public Wi-Fi. That doesn't mean that ARM isn't without issues though. I was told that this product will actually ship with Edge Chromium, but the strange thing was that the version of Edge on the demo units was actually the Intel one.

Browsers are a tricky thing when it comes to emulation. They generate code in real-time, meaning that they're hard to cache. That means that native browsers are key, and Edge Chromium is coming for ARM64; we just don't know when. I had been told that it was going to be announced at the event yesterday, and it wasn't. All I know at this point is that the demo units had the emulated 32-bit Intel version of the browser.

If you put the products next to each other, the Surface Pro X is definitely the sexier model, with its thinner bezels and narrower design. The Pro X is very comfortable to hold, with its curved edges and light chassis. I have to say though, the Pro 7 is more comfortable than previous generations, with the more curved edges, like we've seen from Surface Go. 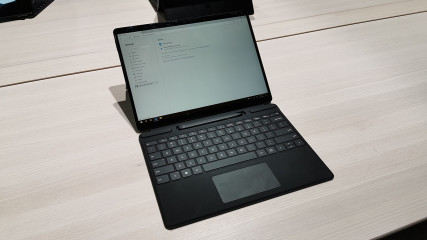 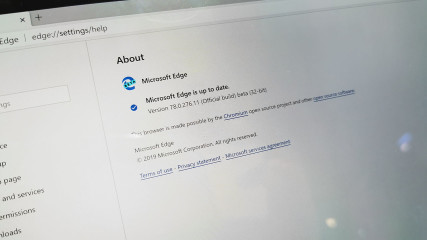 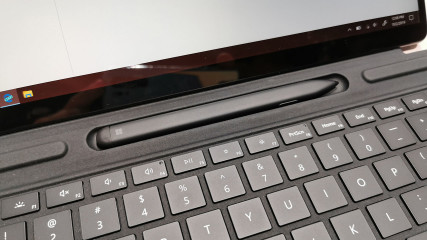 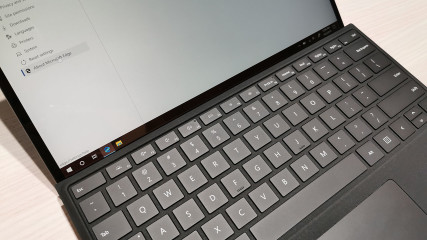 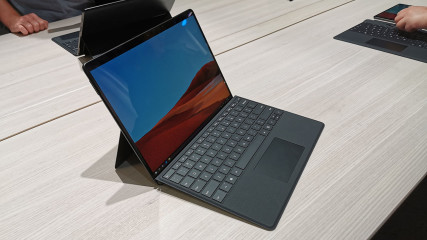 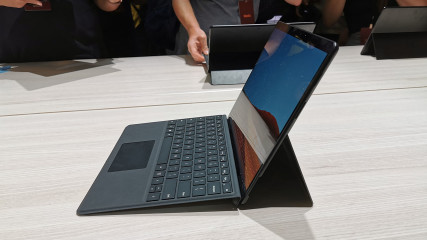 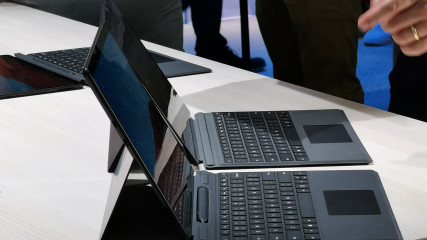 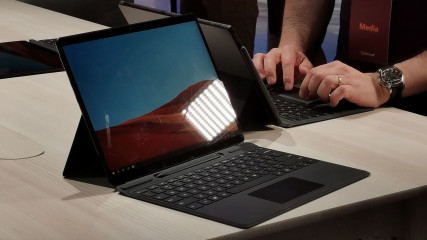 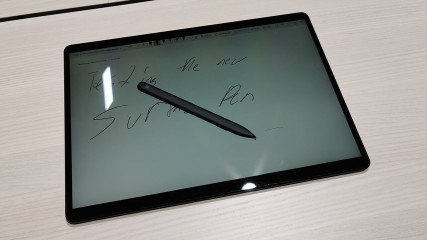 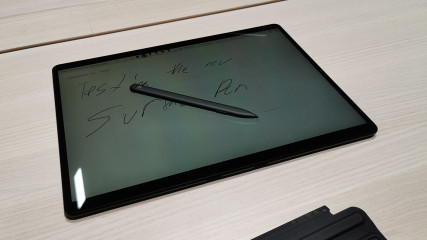 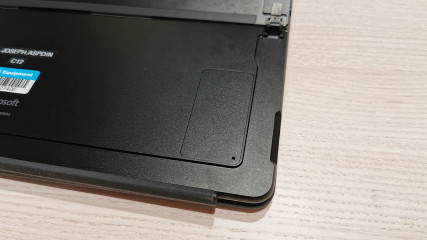 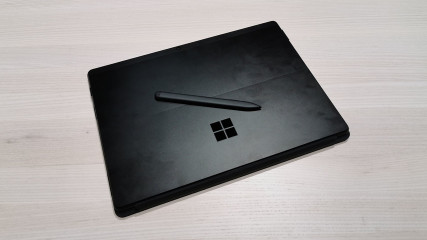 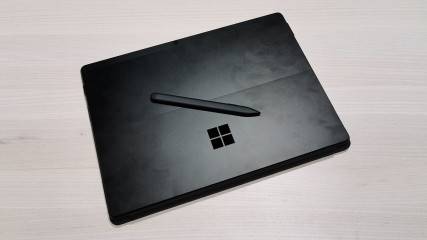 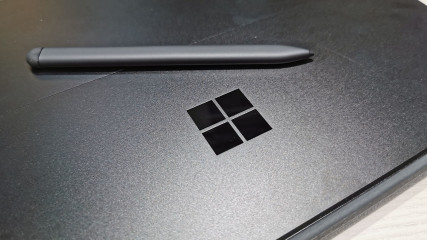 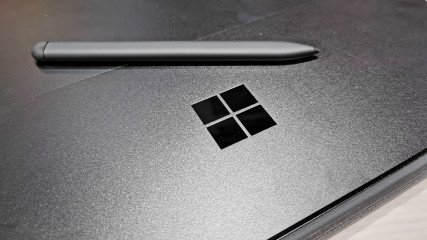 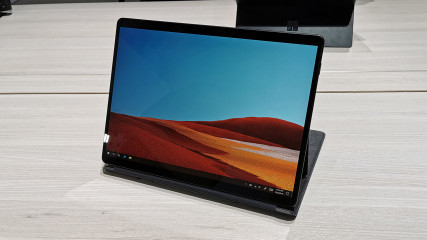 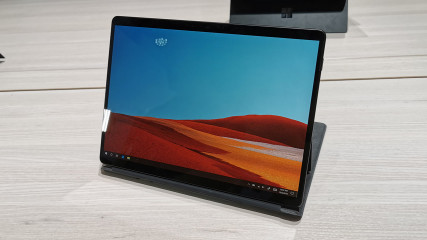 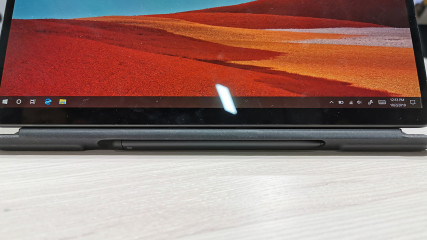 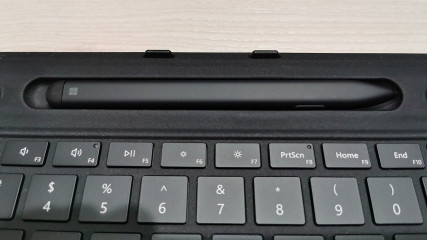 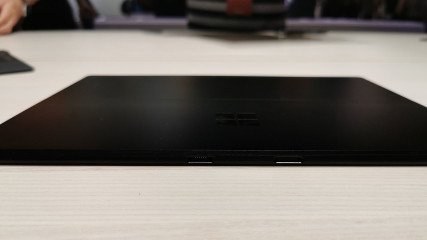 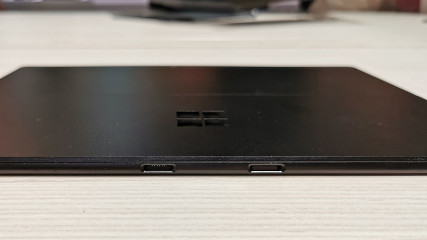 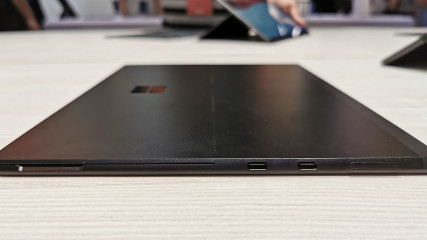 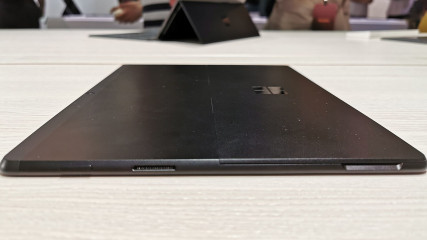 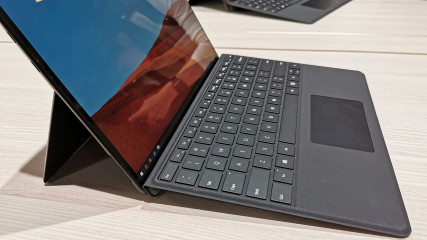