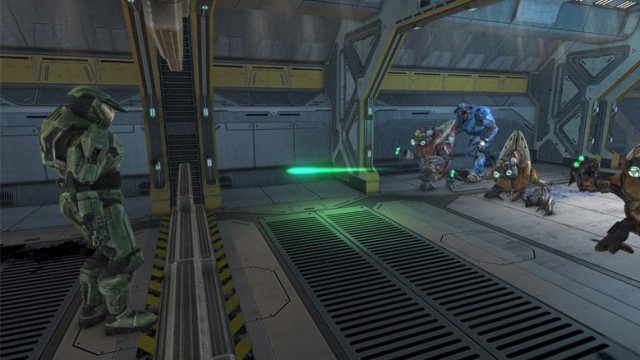 Late Wednesday, an anonymous NeoGAF user unloaded a trove of alleged Xbox One information, including unannounced games, new versions of the recently released console and more. It’s all extremely enticing information, but could it all be accurate?

Shortly after the rumors gained traction on Neowin and elsewhere, The Verge’s Tom Warren published a report corroborating some of the claims. Warren wrote that his “sources familiar with the plans” confirmed a white Xbox One would be released sometime this year and that Microsoft is testing a version of the console without a Blu-ray drive. Additionally, Warren reported that the NeoGAF user’s claim of a system update in March is accurate.

The corroboration gives some credence to the report’s other claims, but hints dropped by Microsoft may also help substantiate the claims.

One of the biggest rumors dropped by the forum post included the allegation that Microsoft is again contracting Saber Interactive and Certain Affinity, developers of “Halo: Combat Evolved Anniversary,” to develop “Halo 2 Anniversary.” If accurate, the game would be released near the 10th anniversary of “Halo 2,” which launched in 2004 (the original game’s remake also launched 10 years after “Halo: Combat Evolved”). Obviously none of this confirms the game, but perhaps Microsoft’s been hinting at it all along.

I am fascinated by Bees. Their organization, resourcefulness, adaptability, navigation skills & contribution to nature is captivating

Graeme Boyd, an Xbox social marketing manager, dropped a similar hint, with Hryb then implying a Twitter user’s guess of a new viral marketing campaign for a Halo game was accurate.

As fans of the Halo franchise know, “I Love Bees” was a popular alternate reality marketing campaign for “Halo 2.”

Other claims made by the NeoGAF user included “Halo 5” (which may not be the game’s final name) being released next year, which would seemingly contradict a recent claim made by a franchise spokesman, Rob Semsey, that “Halo on Xbox One” was not listed among 2014 games “due to official name of the next title not announced yet.” Upon closer inspection of a later statement, however, the spokesman only said “your next Halo journey” would take place in 2014, not necessarily referring to an original entry in the franchise. Still, it seems more likely that his previous statement was referring to the next original entry in the franchise.

Combined with the corroboration by Warren about the white Xbox One and digital-only console, the anonymous NeoGAF user’s claims have some believability to them. They should still obviously be met with significant skepticism, especially with his more recent claim that both “Halo 3” and “Halo 4” would also be ported to Xbox One as part of a bigger “Halo 2 Anniversary” bundle.

Microsoft porting both games simply to be part of a bundle for the second entry in the franchise seems extremely unlikely, when they could be big money-makers on their own. Additionally, releasing a new version of “Halo 4” just two years after its release seems like an odd schedule. Unless the games were straight ports with no graphical enhancements, it would likely require more than just Saber Interactive and Certain Affinity to get them ready in such a short time. His list also suspiciously leaves out “Halo: Reach,” which would be a more likely port candidate as an older game.

Semsey doesn’t seem phased by the rumors, possibly calling into question their validity.

@steveaa Rumors are a natural part of this industry. We'll talk about Halo in due time :)

Other distinct possibilities are that the alleged leaker’s claims could simply be well-educated guesses based on Microsoft’s hints above or that his later claims are for trolling NeoGAF readers (which he seems to imply by saying he’s now just “having fun”), but perhaps Microsoft has actually been laying the crumbs all along.