Back in June, Chinese electronics manufacturer Hisense unveiled its first Windows Phone, the Mira6. The device offers a 5-inch HD display, 1.2GHz quad-core Snapdragon chipset, 1GB of RAM and 8GB of onboard storage, and is just 7.1mm-thick, despite also offering dual-SIM support.

Hisense has now launched a second handset running Microsoft's mobile OS. The 'Nana' is also its first to launch with the very latest version of the OS, Windows Phone 8.1 Update, which is now available to early adopters using other devices under the Preview for Developers program.

The Nana features a 5-inch FWVGA (854x480px) display, quad-core 1.2GHz Snapdragon 200 chipset, 512MB of RAM and 4GB of internal memory, along with a microSD slot supporting cards up to 32GB. There's also Wi-Fi, Bluetooth and a 2000mAh battery - so to put it in simple terms, this isn't really a flagship. This is the opposite of a flagship.

Still, given that it comes with the latest Windows Phone 8.1 Update pre-installed, it also comes with the localised Chinese version of Cortana on board in its home market.

As WPCentral noted, the buttons on this device are noticeably 'incorrect', featuring Android hardware controls, despite coming with the Windows Phone OS. But Hisense did the same with the launch of the Mira6 - this apparently isn't an inaccuracy; it's the actual design of the handset. 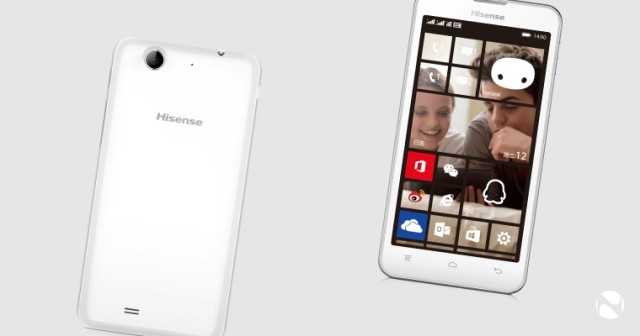 It seems that Microsoft has relaxed the requirements imposed on its many new OEM partners, in return for putting the OS on their devices. This isn't the first time we've seen confusion over a render from a new OEM with Android-style buttons - rather than the Windows Phone trio of Back, Start and Search . It seems like this may be the new normal as the market begins to grow with new manufacturers churning out Windroid Phones - and least until more OEMs adopt on-screen buttons instead.