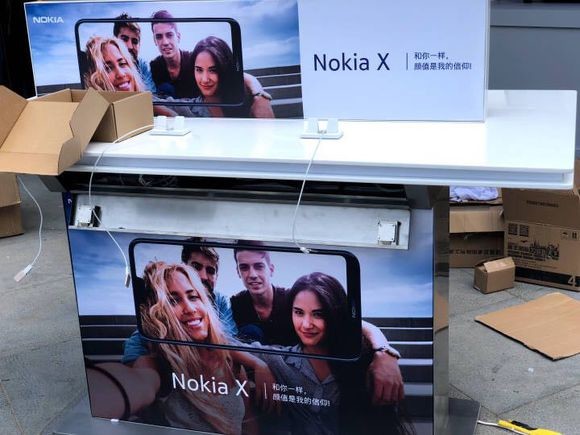 HMD Global is holding an event this weekend that pays tribute to Nokia's past and also gives attendees a glimpse of the future. While handsets like the Nokia 8110 are available to check out, there is also a mysterious unannounced handset that can be seen in promotional materials and also in the flesh there as well.

The Nokia X has been rumored for some time, and we have even seen the handset in past renders via leaks. It isn't the high-end powerhouse some might have been hoping for, but it still has a sleek design and decent set of specifications.

If rumors are to be believed, there will be a 5.8-inch notched screen with a 19:9 aspect ratio on the device's front. There would also be two variants: one powered by a MediaTek P60 SoC, the other by a Qualcomm Snapdragon 636 processor.

As far as differences, the MediaTek model will have 4GB RAM and the Snapdragon 636 unit will have 6GB RAM. The unit will have a dual sensor arrangement on its rear, but might not have sensors made in collaboration with Carl Zeiss.

We just need to wait for May 16, as according to the invitation going about online, that's when the X will be unveiled. The invitation even has a notched portion on the top, mimicking the display of the phone. Luckily, that date is not far off.