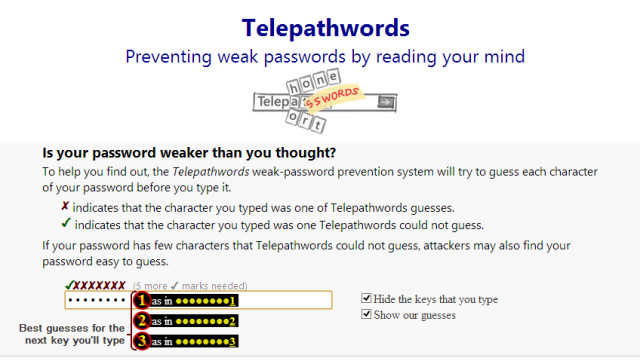 The above example was easily predicted.

In the wake of the huge password breach where sites such as Facebook and Yahoo! were compromised, Microsoft developers have released a tool to curb the issue of account hacking.

Experimental project Telepathwords detects how risky passcodes are by predicting your password setting habits. The engine utilises a collection of passwords in its database along with an AI to make accurate predictions.

Common passwords which were made public as a result of security breaches alongside common password-selection behaviours such as “123456” are also easily predicted by the program.

“To guess the next character you’ll type, we send the characters you have already typed to query our prediction engine. The prediction engine uses a database of common passwords and phrases that are too large for us send to your computer”.

The Windows Club reports the tool is extremely prompt as it can guess the next character the user is about to type. Users are advised to immediately change passwords if it is successfully predicted by Telepathwords.

The tool was tested by hundreds of Microsoft employees before release and is now available to the public.