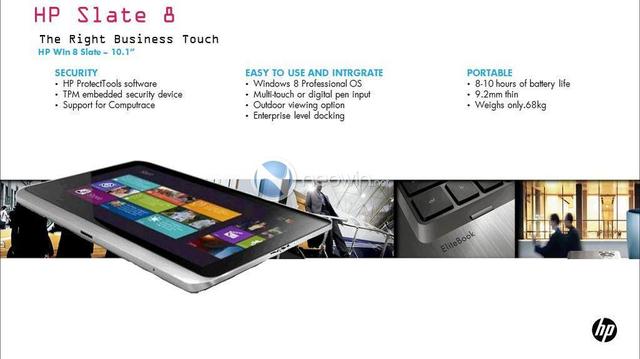 Several months ago, Neowin first posted a slide from an internal HP presentation, showing a render for the Slate 8, their code name name for an upcoming Windows 8-based tablet made for business users. Earlier this month, HP announced the final version of that tablet, which it is calling the ElitePad 900.

While the 10 inch tablet won't be going on sale until January, the company is still promoting the ElitePad 900 with a recent YouTube video that has HP giving a rare glimpse of the pre-production models that were created before the final design was locked.

The video has HP's Vice President of Design Stacy Wolff with a pile of tablet prototype models, including one which (without naming names) is the same model that we first posted up earlier this year. Wolff said that the curved glass design of the prototype was "exquisite" while also feeling good in the hands. What happened? Wolff admits that the final design would be just too expensive to be put on sale.

Another design that Wolff shows off in the video would have been able to put in a lot of high end hardware such as NFC and more. Ultimately, Wolff said the design was too "chubby" and HP scrapped it.

That brings us to the final version of the HP ElitePad 900. Wolff said that overall it is a "very clean design" which incorporate NFC and other antenna on the back and making the left and right sides as slim as possible. Wolff also shows off the tablet's Smart Jackets, which adds more hardware features while also serving as a case for the ElitePad 900; HP has yet to reveal pricing for the tablet.