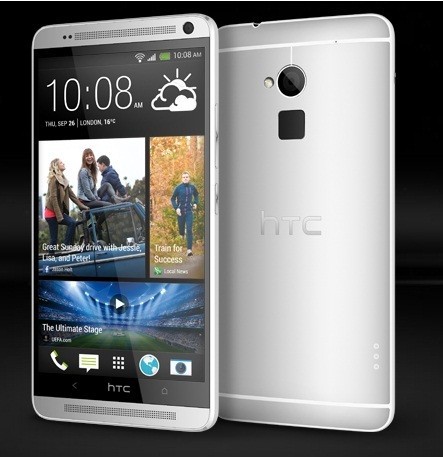 Vodafone are the first carrier in the U.K. to offer the HTC One Max, which was announced yesterday confirming all the leaks and tidbits we had previously reported, including the fingerprint sensor which is located on the back of the device rather than the front!

The "super-sized" smartphone features a 5.9-inch full HD 1080p OLED display and improved Sense version 5.5. It's being offered on a 24-month Vodafone Red 4G-ready plan with £49 upfront payment and £47 monthly thereafter. The offer also includes choice of Spotify Premium or Sky Sports Mobile TV access, along with 2GB data each month. There's also an extra 4GB data freebie each month on offer, provided customers sign up before the end of October.

The phone can also be bought off contract at Vodafone starting this week; Clove UK has also confirmed the pre-order for 32GB silver colour SIM-free and unlocked HTC one Max, which costs £589.99 including VAT; but you'll have to wait a little longer as they don't expect to start shipping until the end of October.

Unlike Apple's Touch ID, which is integrated into the Home button on the iPhone 5s, the fingerprint scanner included in the HTC One Max is on the back of the device, just below the camera lens. It allows unlocking or locking of the homescreen, as well as assigning three different app launches registered with different fingers; a bit gimmicky we admit, but could be useful.

Inside there's a Snapdragon 600 chip, which features a 1.7GHz quad-core processor, 2GB RAM, and like the HTC One, the Max also comes with a HTC UltraPixel rear-camera and a 2.1MP front-facing camera. The One Max is also NFC enabled, and unsurprisingly supports 4G LTE network speeds. The HTC One Max ships with Android 4.3 preloaded.