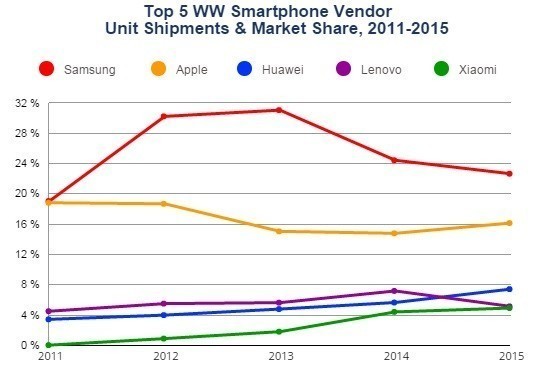 The International Data Corporation (IDC) has just announced smartphone shipping performance data for Q4 of 2015, and market data for 2015 as a whole. The numbers have been crunched and the results counted and verified, and over the holiday season (and indeed the year), there was growth for both Samsung and Apple.

As you can see from the data, Huawei, is up 37.0% on Q4 2014 taking the third spot behind Apple. We’ve previously reported that the Chinese vendor is doing well and our review of the Honour 6 Plus was very positive.

We should also be tipping our hat to Xiaomi, who managed to open a sizeable gap, from LG in sixth, to claim the number five spot on the list. Posting a 10% year-over-year growth. Expansion into the US market can only help push them further up the chart.

While Lenovo posted a massive 43.6% growth over the previous year, the purchase of Motorola prompted their name to be mentioned in an 18.1% drop in shipments, compared to Q4 2014. Over the next year, the Motorola name will cease to be, being phased out by Lenovo.

Probably as expected, Samsung posted an increase, coming out on top with 14% growth compared to the same period the previous year.

This just leaves Apple, who have been reporting a slowdown in their iPhone sales. The IDC corroborate this, with Apple only posting a 0.4% growth compared to 2014. That said, they still took the number two spot, because it’s Apple!

Finally, when we compare the figures for 2015 as a whole, the top five remains the same, again with Huawei posting a hugely impressive 44.3% growth, over 2014, putting it firmly in the "big winner" category for the year. As for Apple, it still managed to ship 231.5 million smartphones in 2015, a growth of 20.2% over 2014. Finally, while Samsung only grew 2.1% over the previous year, it did this by shipping a whopping 324.8 million handsets.