Microsoft's Internet Explorer 10 browser has made significant strides for the company when it comes touch usability for their platform. Microsoft put a boatload of hard work into creating a browser that worked not only with a keyboard and mouse but also with touchscreens.

In the video posted above, Microsoft goes into detail about how they built IE10 to be optimized for for touch inputs, which will allow users to browse web with only your finger, no matter the webpage.

Microsoft states that to it, touch is the new fast and this makes a lot of sense if you begin to think about how browsers evolved. For a significant length of time, speed was everything for browsers. But at this point, browsers are able to render content so quickly that the differences between the major platforms is negligible because when you account for connection speed and processing power, the margin of error for measuring this speed on an end users computer is overshadowed by the other variables. 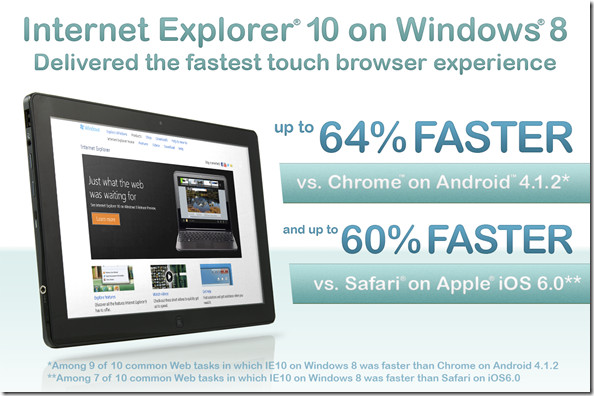 IE, though, still loves to tout that it is the fastest browser for surfing the web, and when compared to the tablet offerings from other platforms (think Surface RT vs iPad/Android) it comes out well ahead of those browsers, besting them by up to 64% against Android and 60% against Safari on iOS.

Despite all of the work the IE team has done, they are still working to turn around the brand perception but they have made significant strides in re-connecting with the consumer recently with a clever campaign themed around "the browser you love to hate."