A new report has indicated that although Apple's awaited side-by-side multitasking feature is under development for iOS 8, it is still being built and is not yet ready for public usage. App multitasking is currently one key area where Apple lags behind the other players in the computing market.

It is also one of the few things which Microsoft's Windows 8 consistently scores highly in with its praised 'Snap' feature, capable of running on even low-resolution displays. This is present in all areas of the UI, including the desktop, where it has been appreciated by users since the launch of Windows 8. 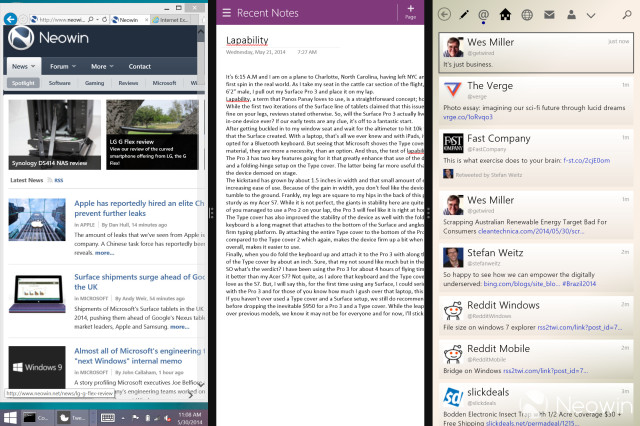 Brian Chen, a technology reporter for the New York Times, tweeted yesterday to say that he has been told the feature "isn't ready yet" although he does not say where he acquired the information or who his source was. Chen adds that the functionality is still very much a work in progress and as such won't be shown off at Apple's Worldwide Development Conference, WWDC, next week.

I've been told that the split-screen feature for iOS 8 isn't ready yet and won't be shown at WWDC. Still a work in progress.

Presumably, therefore, split-screen multitasking is still coming to iOS 8 but not at launch. It looks very much as though it will debut in a future update for the mobile operating system. When it arrives, the functionality will finally make Apple devices a more viable option for business users seeking maximum productivity on the go - something that only a Windows device or an Android-powered Samsung Galaxy Note with its S-Pen could formerly offer. The iPad will be able to properly rival Microsoft's Surface for business users.

Although it remains to be seen whether the feature will be present on all Apple devices, it is likely that only iPads with the increased screen space will be able to utilize the option. Even with a 'retina' display, viewing two apps on a 4-inch iPhone could very quickly prove to be a bit of a squeeze.