Despite all that Google is doing to champion HTML5, Android still lags far, far behind iOS when it comes to the standard. A new study from mobile development software maker Spaceport claims that iOS performs 3 times faster than Android.

The test employed a variety of different hardware and OSes, ranging from Android 2 - 4 and iOS 4 and 5. BlackBerry Playbook OS and the Kindle Fire's custom Android based OS were also tested. Basically, the test revolved around how many objects could be displayed on screen at one time without impacting performance. Spaceport set 30 FPS (frames per second) as the minimum threshold for smooth gaming.

As you can see from the chart below, Apple's latest iOS devices left Android in the dust by a very healthy margin. Even the worst iDevice that was tested - an iPhone 3GS - could handle 50 moving objects and keep a smooth performance. The worst Android device tested, a Motorola Droid 2, wasn't able to display one object on screen at that rate, essentially meaning that it couldn't handle even the lightest HTML5 gaming. 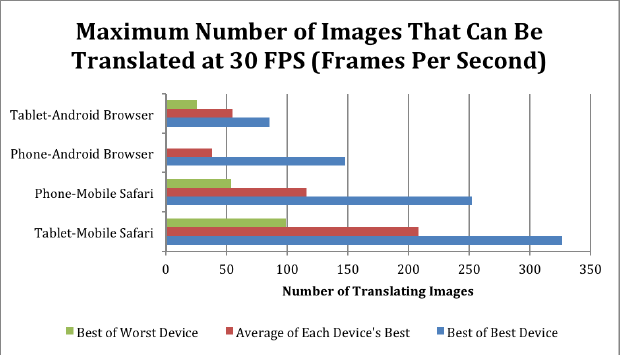 Even the Kindle Fire couldn't come close to the three year old iPhone's performance. Beefier Android tablets still had issues, but Spaceport warns that their results regarding Android tablets should be taken with a grain of salt, due to issues in the Android 3.0 browser and the lack of any Android 4.0 tablets in testing.

Ultimately the iPad 2 had the best performance of any device tested, despite others technically having more powerful hardware. It smoothly displayed 326 objects. The iPhone 4S wasn't too far behind at around 250 images. The best performance the test saw out of an Android device was the Samsung Galaxy Nexus, running Android 4.0. It smoothly processed over 140 images.

The study also shows that Apple has been improving HTML5 performance by leaps and bounds with each successive iOS update. iOS 5 shows a really significant bump in terms of performance compared to iOS 4.

Since Apple has been championing HTML5 for a while now, in no small part due to their vendetta against Adobe and their Flash software, this may not come as too big of a surprise. The originally concept for the iPhone, after all, didn't run apps at all - it relied on web apps, which was a major reason Apple decided to release Safari for Windows.

What is surprising is how far ahead Apple is in terms of performance when compared to Android. Even though Google has done some HTML5 championing of their own, Android is just pitiful at running it. Right now this may not seem like that big of a deal to most users, but HTML5 is supposed to be the future if the web, and more and more developers may turn to it and its multi-platform compatibility in the future. Google needs to catch up before then.