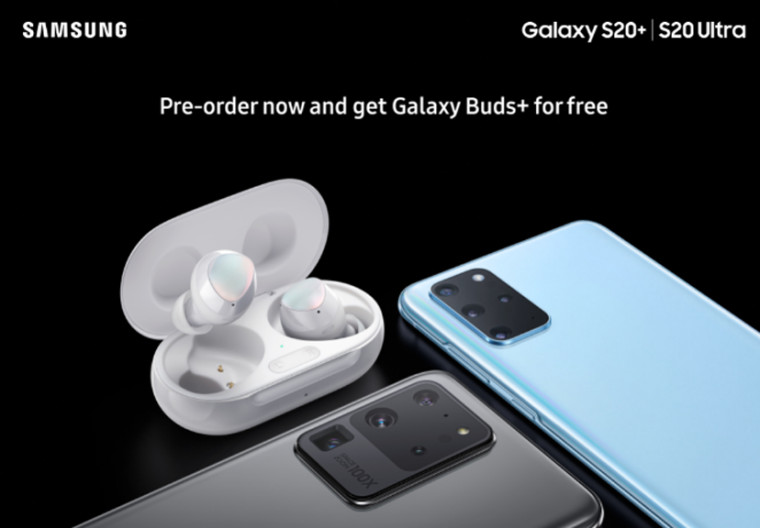 A leaked marketing image of the Galaxy S20 points to Samsung offering free Galaxy Buds+ to customers who pre-order its upcoming flagship device. The image indicates the offer will only be applicable on pre-orders of the Galaxy S20+ and Galaxy S20 Ultra.

While not mentioned in the marketing promo, the Galaxy Buds+ pre-order offer is likely going to be available only in key markets for Samsung which includes the United States, the U.K., and parts of Europe.

Samsung has previously bundled free Galaxy Buds with the Galaxy S10 and Galaxy Note10 pre-orders Even then, the company had excluded the cheapest Galaxy S10e from the free Buds offer. Thus, it is not entirely surprising that the company is planning on offering a similar pre-order bundle for only the higher-end variants of the Galaxy S20 series.

If the leaked prices are anything to go by, the Galaxy S20+ and S20 Ultra are going to be extremely expensive so Samsung is trying to sweeten the deal for interested customers with this pre-order bundle.

The Galaxy Buds+ are yet to go official. The earbuds are expected to be announced alongside the Galaxy S20 series and the Galaxy Z Flip at the company's Unpacked event on February 11. Leaks point to the Galaxy Buds+ offering better sound quality, longer battery life, and faster charging compared to the original Buds. The wireless earbuds will also feature four microphones for better voice quality while on calls. Sadly, they will miss out on Active Noise Cancellation which is quickly becoming the staple feature of high-end truly wireless earbuds.