Lenovo's new Phab 2 Pro's big claim to fame is that it's the first phone to use Google's Tango. The phone is massive, with a 6.4-inch display and a 259-gram body. For $499, is Tango worth it to make the Phab 2 Pro your next phone despite some sacrifices? Here's our review.

Coming out of the box, one thing was clear: this phone is huge. At the time, I was also reviewing HP's Elite x3, which was dwarfed in comparison with the Phab 2 Pro. Check out the unboxing video, where I put the devices side-by-side, along with other large phones.

OK, let's dive right into Tango because let's be honest; it's the reason you're here. Tango is meant to be aware of the world around you with spatial tracking features. This allows for a sort of augmented reality, and it's pretty cool.

To be clear, this feature isn't entirely useful, just like anything else in its early stages that requires developer support. If you launch the Tango app and choose the link to the Play Store which should show apps that support the feature, you'll get 32 options.

One app is called Amazon Product Preview, and it allows you to pick a TV off of Amazon and see what it will look like in your home. That's it for that one. Just TVs.

There are a bunch of games, such as one called Ghostly Mansion. Basically, this game puts you in a room and you have to go around finding objects. In many cases, I found myself running out of space to get to the objects, which seemed to defeat the purpose of spatial tracking.

Lowe's Vision is one that Lenovo showed off at its product launch. It allows you to take measurements using just the smartphone's camera, and you can use it to decorate your home. This is one of the few Tango apps that actually feels like it could be useful.

Most of the apps that you'll find in the Play Store almost seem like they exist just to exist. I have no doubt that they'll get better and more diverse as long as Google keeps pushing the project, but right now, there's nothing life-changing about it.

It also doesn't work that well. As I mentioned with Ghostly Mansion, it would basically tell me to walk through walls. Stuff like that seems to happen a lot, where it thinks the space around me is just a bit different than it actually is.

One more thing that I want to mention - which we'll go over in more detail later - is the Camera app. It has an AR mode, which allows the user to place a dog, cat, or something else in a photo. You can do all kinds of things with it, such as give the dog a ball or a bone. It's pretty cool, but like a lot of the Tango stuff, not entirely useful. It's the type of thing that you'll play with for a few days when you first get the phone, and will never use again.

And that brings us to the rest of the phone. The body of the Phab 2 Pro is what makes it really hard to recommend. Aside from the device being massive, it's also really heavy, making it a chore to carry around every day.

To be honest, the entire device feels more like a proof of concept, rather than an actual product that's made for the mass market. It's the first Tango phone, which is great, but the rest of the handset doesn't really measure up. In fact, given its size, shape, and weight, it could work well to be used as a mini-tablet, but that's not what it is. 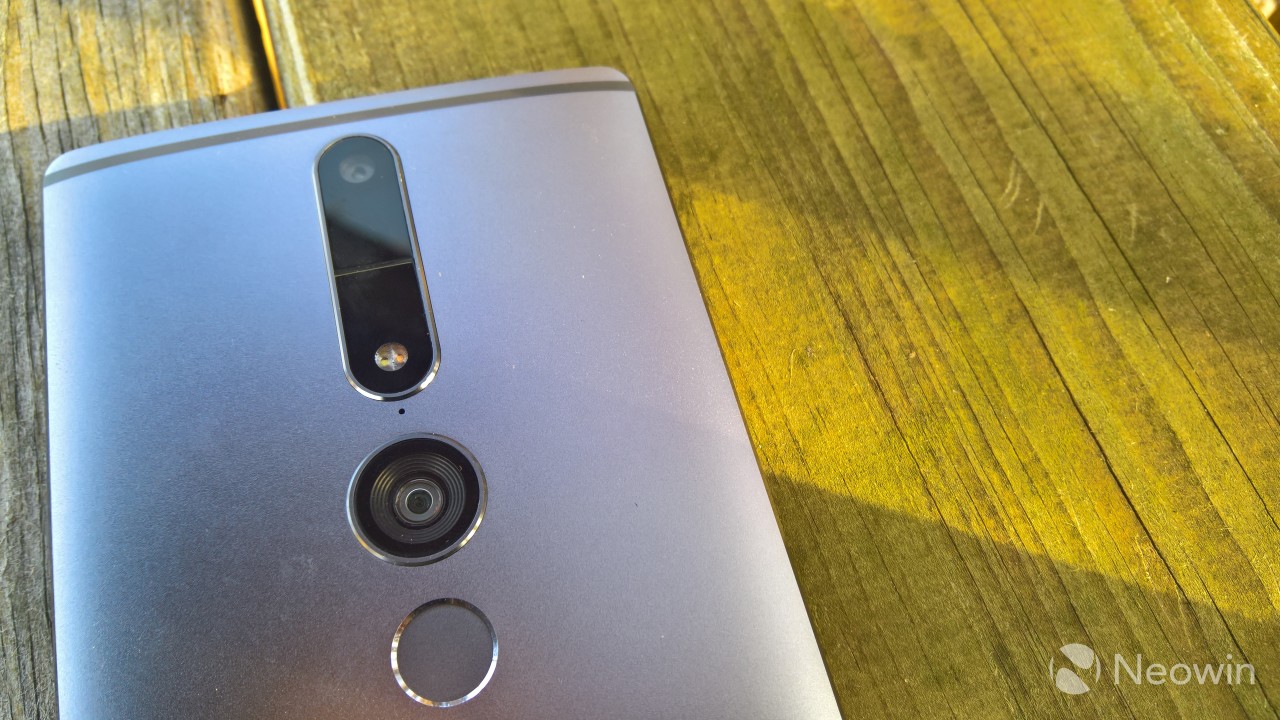 Aside from the obvious size issues, the metal unibody design looks sleek. The back is curved, which makes it a bit easier to hold such a large device. Right above the middle of it is a fingerprint scanner and above that is the camera, flash, and Tango sensors.

The top of the device is where you'll find the 3.5mm headphone jack and on the bottom are the speakers and a micro-USB port. As you undoubtedly are right now, I was disappointed at the choice of micro-USB over USB Type-C. I have no doubt that this is a device that's been in development for a long time, which would explain it, but still, it's almost 2017 and the world should be moving on to USB Type-C.

The right side of the handset has your standard button configuration that you'll find on many devices. The power button is right above the center of it, and above that is a volume rocker.

The display is nice, as in it's up-to-par. It won't be winning any awards, but it's about where you'd expect a $500 phone to be. 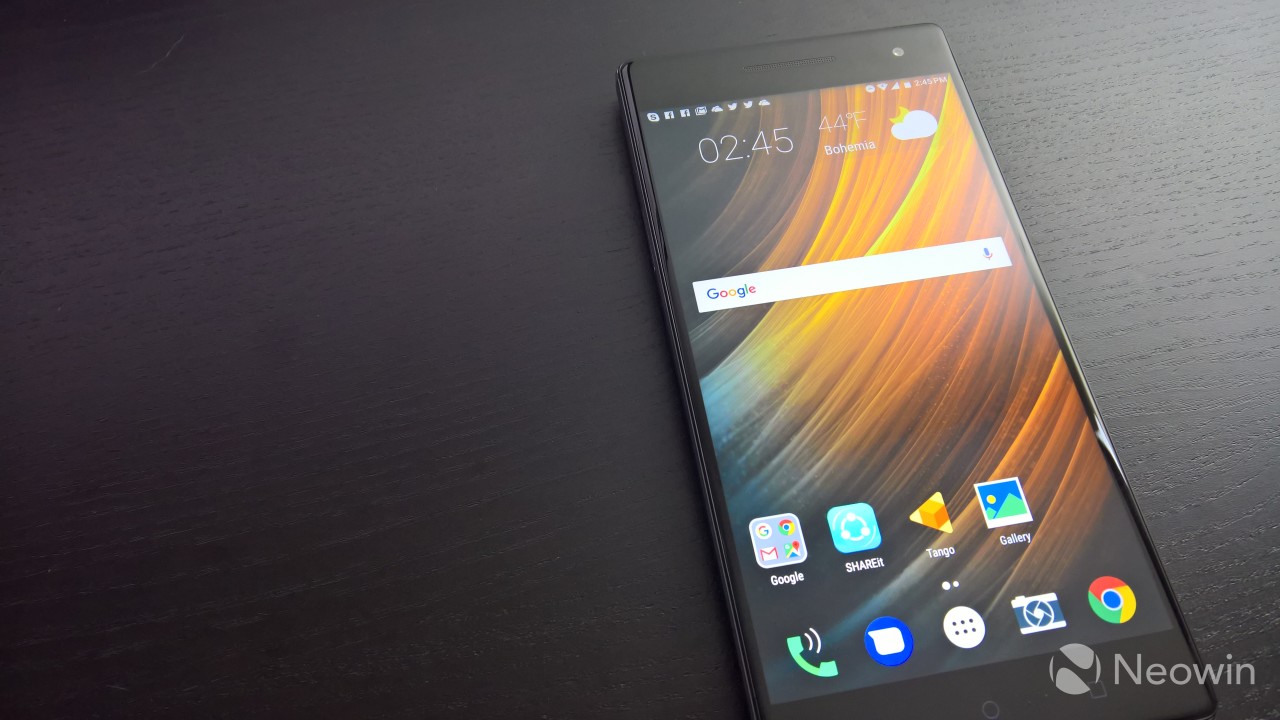 Of course, it's 6.4-inches and 1440p, so it's big (are you noticing a theme yet?). Like other large handsets that I've used, this does have its benefits, especially if you don't have the best eyesight.

I really don't want to talk about the camera that much, because honestly it's not that good. The device uses a 16MP sensor with an f/2.2 aperture.

It also has phase detection autofocus (PDAF) - which is definitely a feature that I look for in a smartphone camera, but it doesn't work well in this case. In fact, I found it extremely hard to get an accurate focus out of the Phab 2 Pro, and in cases where the subject wasn't centered, actually impossible.

There's no manual focus, so tap-to-focus is all you get. There are a few manual settings, but everything is hidden under an options button. The Camera app itself feels like it's missing basic options, such as more than two resolution choices for photos, or the ability to show a grid on the viewfinder.

There's a lot that you can take away from these images, other than the focusing struggle that I noted above, which I actually want to reiterate is a serious struggle. You'll notice that the camera compensates for light based on where it's focused, so this actually made dealing with lighting a bit rough as well. This is called metering, and different cameras do it in different ways.

Another thing that you'll see is that bright lights can end up blowing out the image in a major way, as you can see from the Christmas tree photo at the bottom. Take a look at that same photo, side-by-side with one taken with the LG V20, along with some other photos from above.

There's actually a separate mode for night-time photos, which offers even less control than the regular camera mode, such as the ability to tap-to-focus.

The night-time mode is clearly meant to be brighter, but it also presents a much noisier image.

One thing that's definitely lacking is a flash. Most modern phones implement some kind of LCD flash, where the display lights up to brighten the image. The Phab 2 Pro does not offer this option, and that's disappointing.

Lenovo's Phab 2 Pro has four high-powered ARM Cortex-A72 and four lower-powered ARM Cortex-A53 cores, all packed in with an Adreno 510 GPU to come up with the Snapdragon 652 chipset. Performance is pretty much one of few areas of this device that did well.

In fact, battery life is pretty great as well, which is afforded by the massive 4,050mAh battery. This also results in a heavier and thicker handset, but at least it will get you through the day.

Of course, we also have benchmarks. First up is Geekbench 4, which tests the CPU. 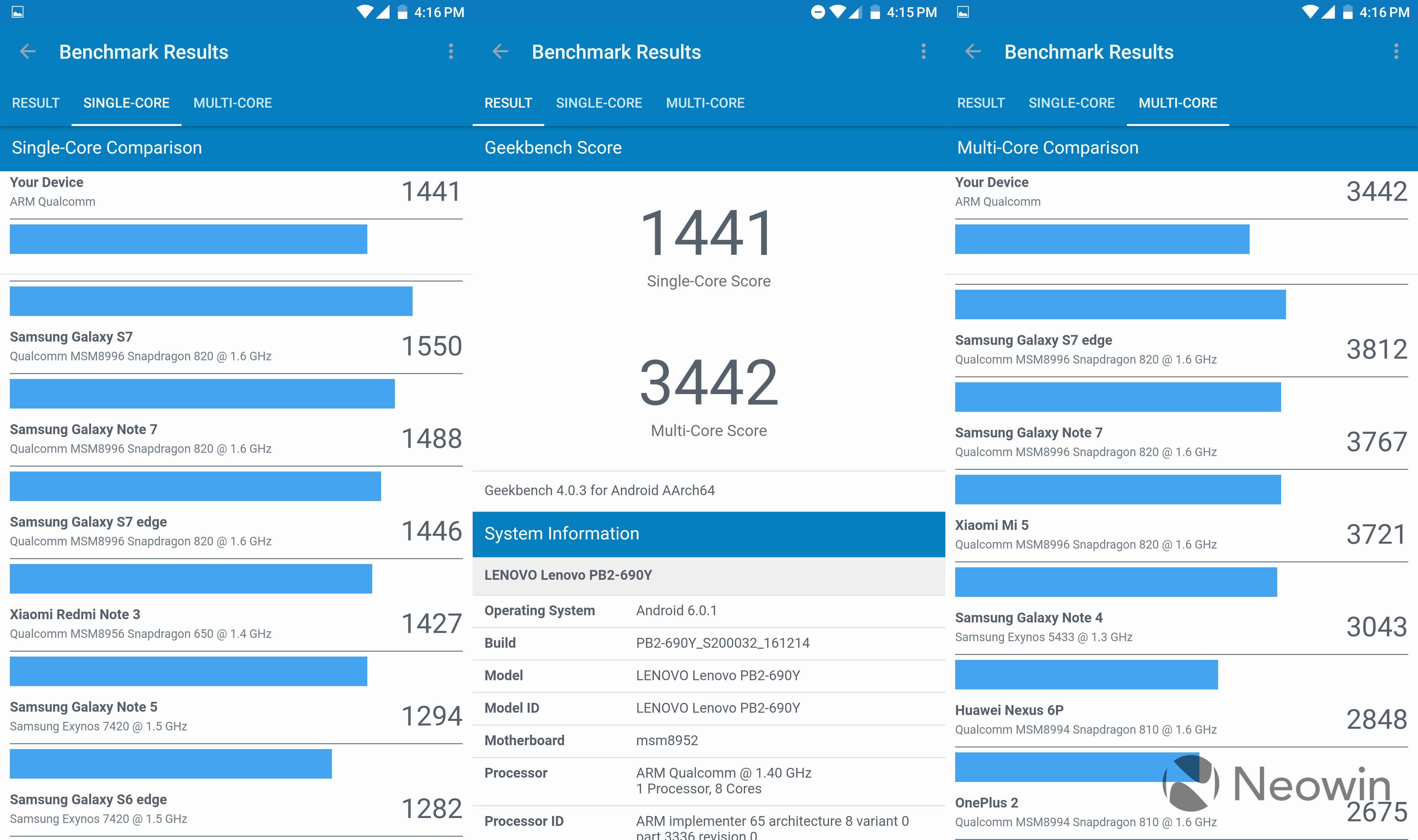 Next up is AnTuTu, which tests just about everything. 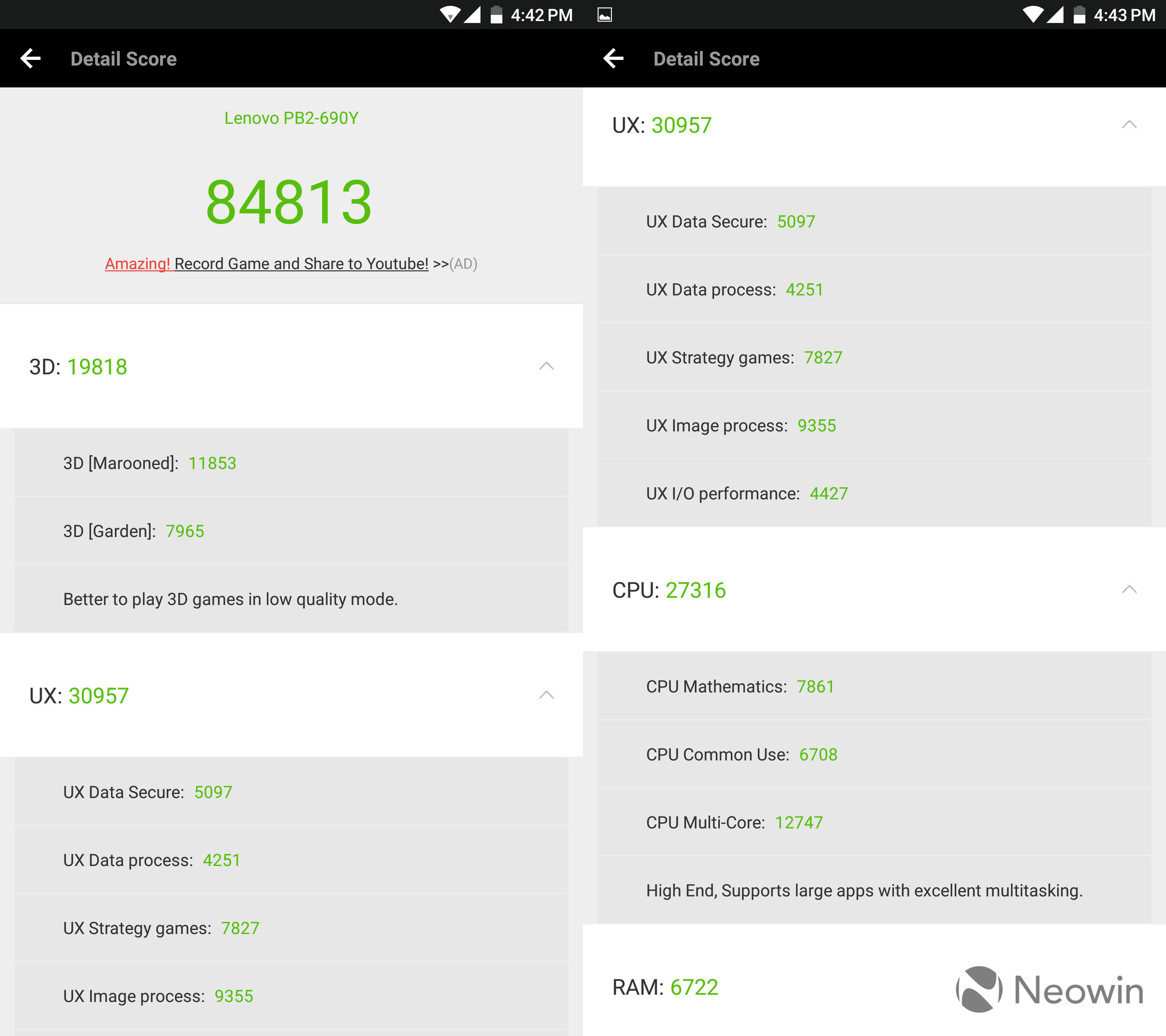 Finally, we have GFXBench, which tests the GPU. 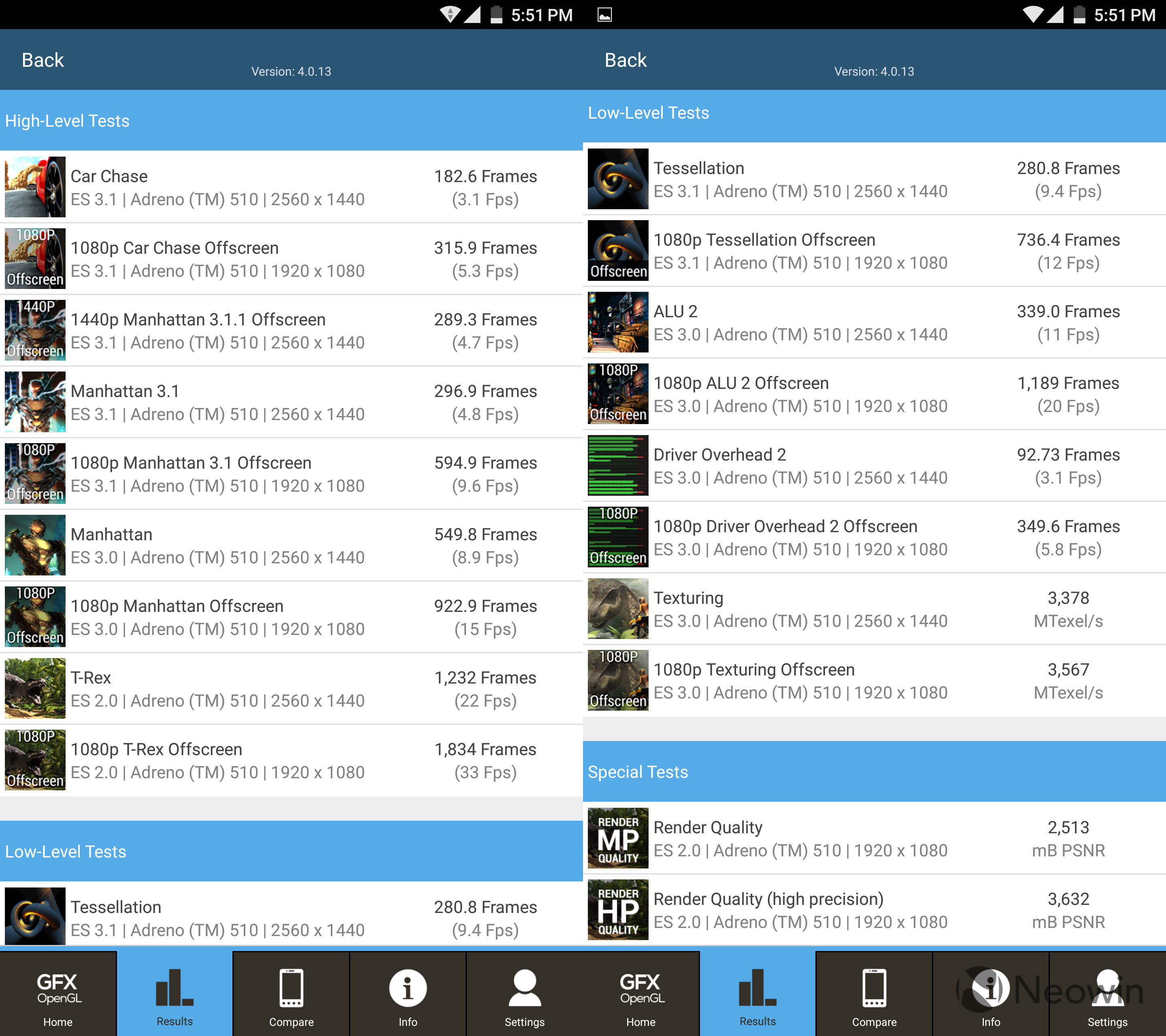 The separate offscreen tests are meant to put all devices on a level playing ground. For example, the Phab 2 Pro has a 1440p display, so it wouldn't be fair to compare its scores from a regular test to a 1080p display, since there are far more pixels for the GPU to push on 1440p.

At $499, I'm really not sure if this device is meant to go head-to-head with flagships or premium mid-tier devices. The truth is that it can't really do either.

Modern flagships tend to be good at just about everything. They have awesome cameras, beautiful displays, powerful performance, and usually some cool features. Mid-tier devices tend to excel in one or two areas and they'll be OK in the rest. 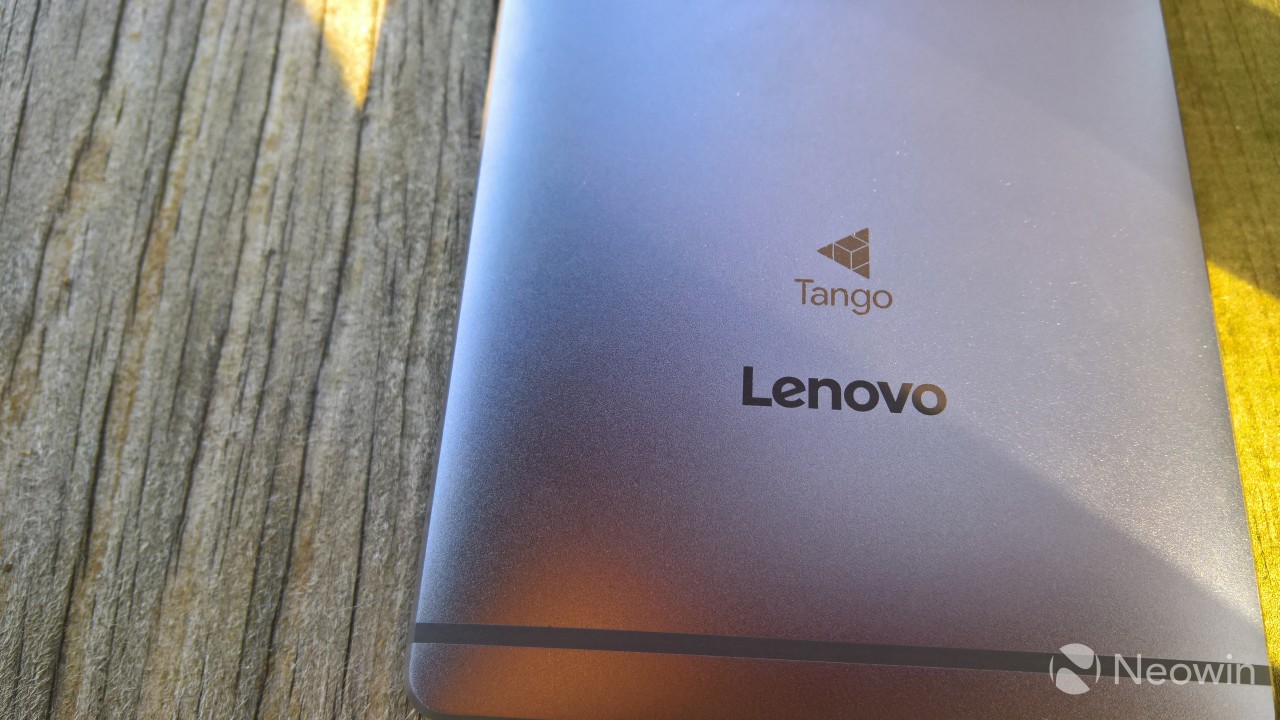 Unfortunately, there's nothing that the Phab 2 Pro is actually good at. The handset is big and bulky, making it awkward to carry around, and the camera is mediocre. Performance is decent, and that's the only thing that's keeping it from being pretty much useless.

It's clear that Tango was the feature that Lenovo focused on here, and it's just not that good. I have no doubt that there will be firmware updates to improve it, along with new apps that make better use of the feature, but for now, it's simply not enough to recommend buying a device.

Don't get me wrong; the Lenovo Phab 2 Pro is pretty cool and it says a lot about the company that it was willing to be the first one out of the gate with Tango, but I simply can't think of a reason to recommend this device to anyone.