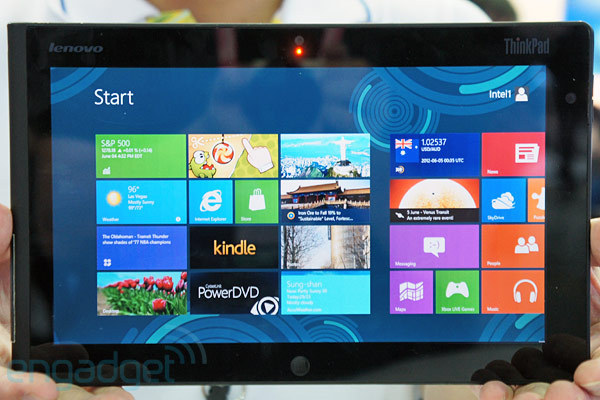 Lenovo has already introduced a hybrid IdeaPad Yoga tablet-notebook running on Windows 8. This week at Computex, Engadget reports that Lenovo is showing off a more conventional Windows 8 tablet. The product technically doesn't even have a name yet, although it is referred to in the article as a ThinkPad.

The 10.1 inch tablet has a 1366x768 resolution screen and is 9.7 mm thick, which makes it pretty thin and light. There's not a lot of information about the hardware inside, although the article says there is some kind of Intel Clover Trail processor running things, and the tablet is supposed to last over 10 hours on one battery charge.

It's still early days for this product and its specs could change but it seems clear that Lenovo is going to be making at least one kind of Windows 8 stand alone tablet for its launch late in 2012.