Back in May 2019, Lenovo introduced the world to the ThinkBook brand. Aimed at small to medium sized businesses, I've always considered it to be the anti-ThinkPad, bringing the best of Lenovo's usual portable PC brand, and leaving the rest.

That's where the ThinkBook 14s Yoga comes in. Announced last year in September, it's the first convertible to come out of the relatively new brand. You might recall that back in the day, Lenovo ThinkPad was the first brand to actually offer a 360-degree convertible. Now that it's sort of reinventing what its business lineup could look like, it's pretty cool to see what we've got here.

The ThinkBook 14s Yoga comes in a beautiful Abyss Blue color with a two-tone design. Like a ThinkPad convertible, it has a pen garage, a solid keyboard, and more.

I really like the look of this generation of Lenovo ThinkBooks. They're all made out of aluminum, but they have this two-tone design. For this model, the color is called Abyss Blue, and if you're sick and tired of the dull, black look of a ThinkPad, this should pique your interest. 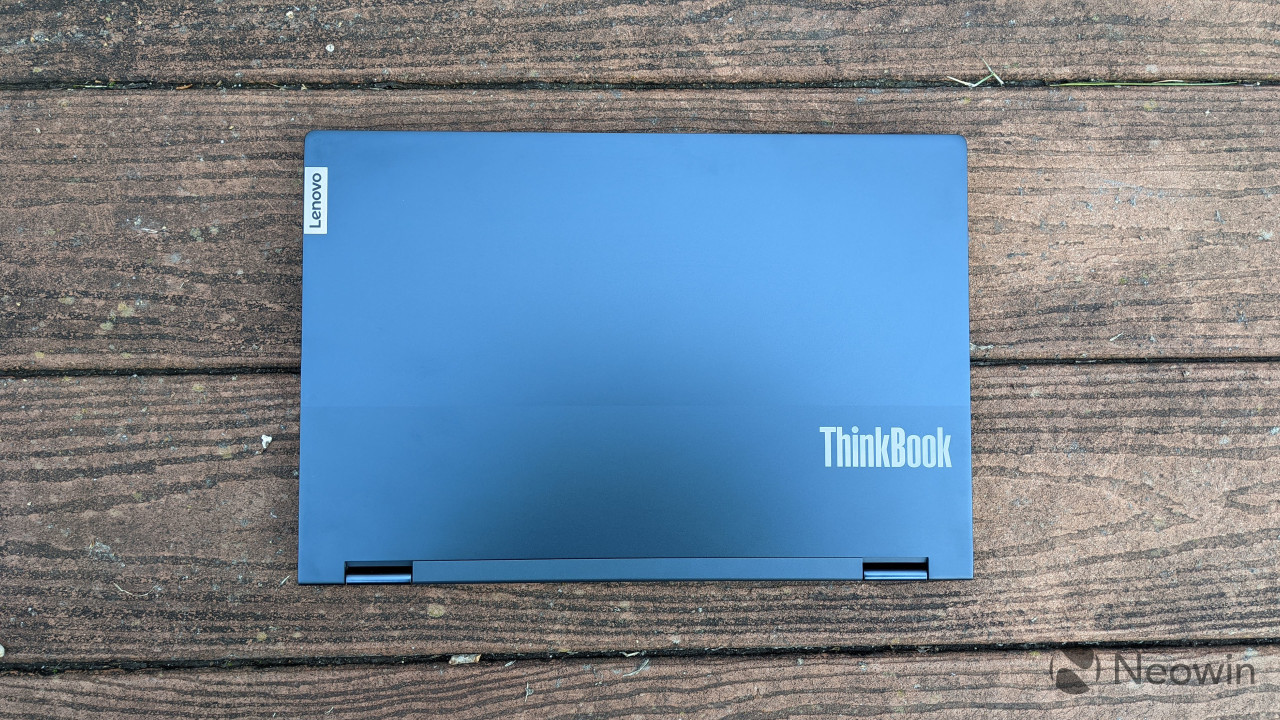 I just love that it's blue. I think that we've seen enough silver and gunmetal gray aluminum laptops, but if that's your thing, this also comes in Mineral Grey. It has the familiar ThinkBook logo in the bottom-right, making the PC look stylishly minimalistic.

It weighs in at just under three and a third pounds, which isn't particularly light for this kind of PC. After all, aluminum is a heavy material for laptops. This is made up for with a solid build quality. 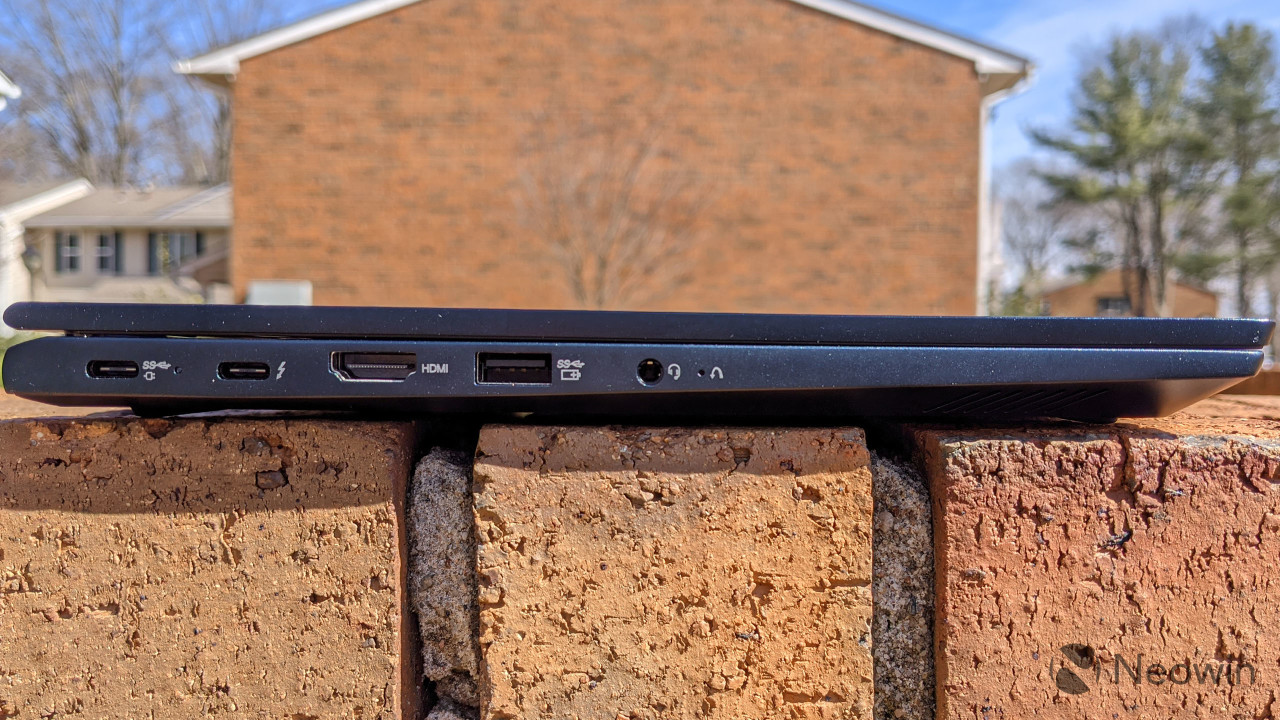 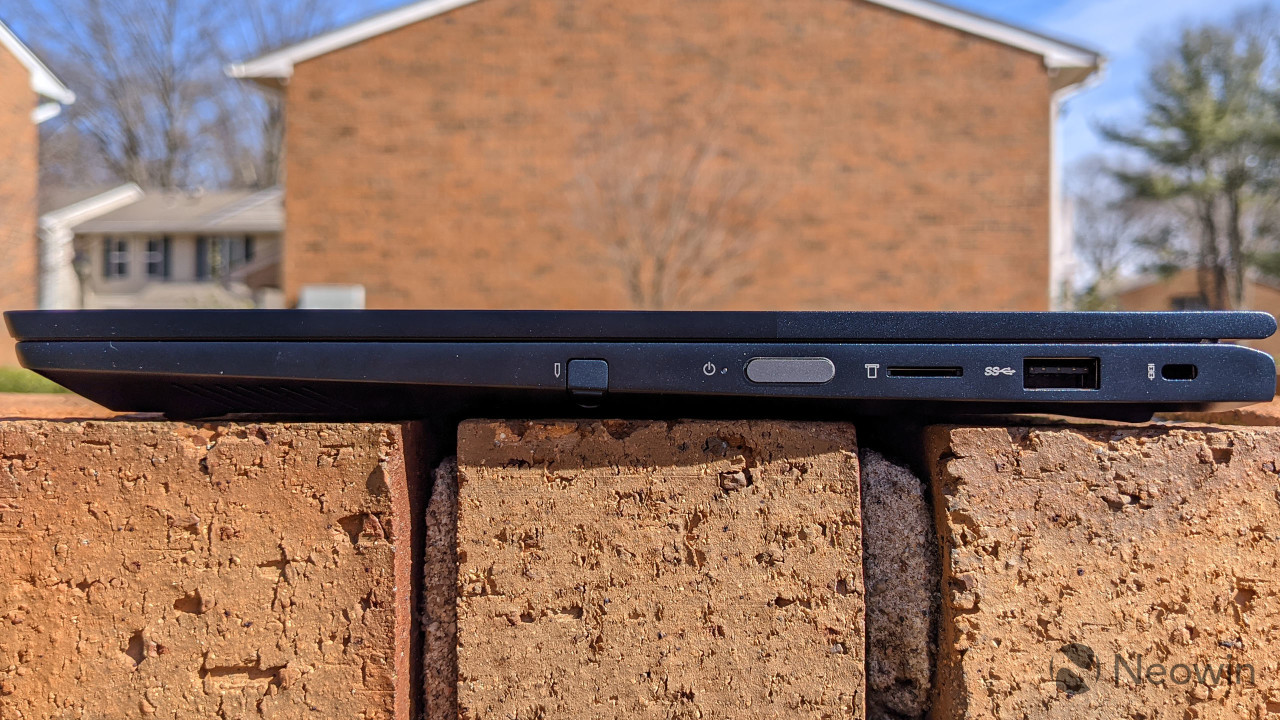 On the right side, you'll find another USB 3.2 Gen 1 Type-A port, along with the microSD card reader. There's also a power button on that side, which doubles as a fingerprint sensor. This is good design, compared to putting the fingerprint sensor on the keyboard. Being a convertible, you might be using it as a tablet, so this is easier to access no matter which form factor you're using. It also scans your fingerprint when you first boot it up, rather than having to scan it again after it's booted up. 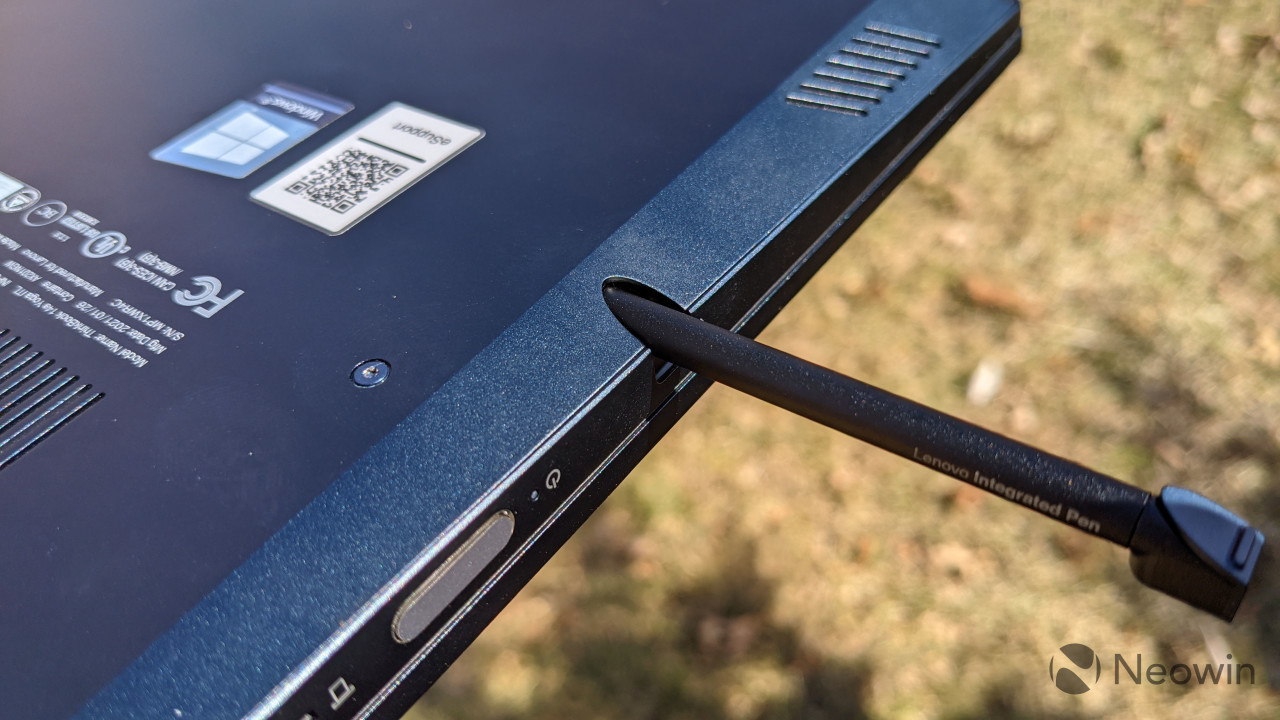 Also on that side is a pen garage, one of my favorite features that you'll find on any ThinkPad convertible. It's just so much more convenient than magnetic attachments or pen loops, since it never gets in the way. With this method, the pen is always with you, and it's always charged.

There's a lot here that's just good design. I love the two-tone Abyss Blue color, the pen garage, the power button with the fingerprint sensor, and everything else. I just wish Lenovo used better ports, not that you'd really notice any difference. You'll need the Thunderbolt port if you want to connect two 4K displays or an external GPU, but other than that, you probably wouldn't even notice.

The Lenovo ThinkBook 14s Yoga comes with, you guessed it, a 14-inch display. The resolution offered is 1080p, so there are no QHD or UHD options. Brightness comes in at 300 nits, and while it supports Dolby Vision HDR, the screen simply isn't bright enough. If you go to use it outdoors, you'll have trouble using the display. 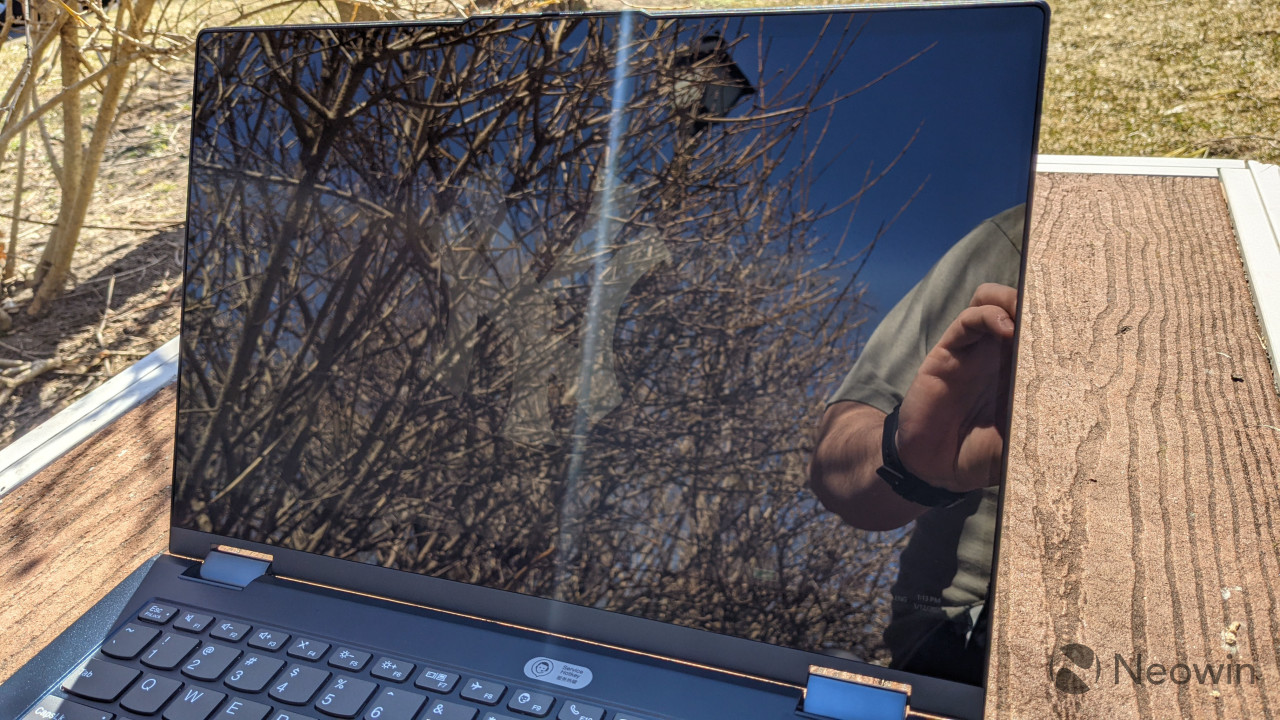 The display itself is fine, as far as things like color accuracy go, but I just don't think that it's bright enough. It has small bezels on the sides, and on top, it has Lenovo's usual reverse notch, which packs the webcam and a ThinkShutter privacy guard. 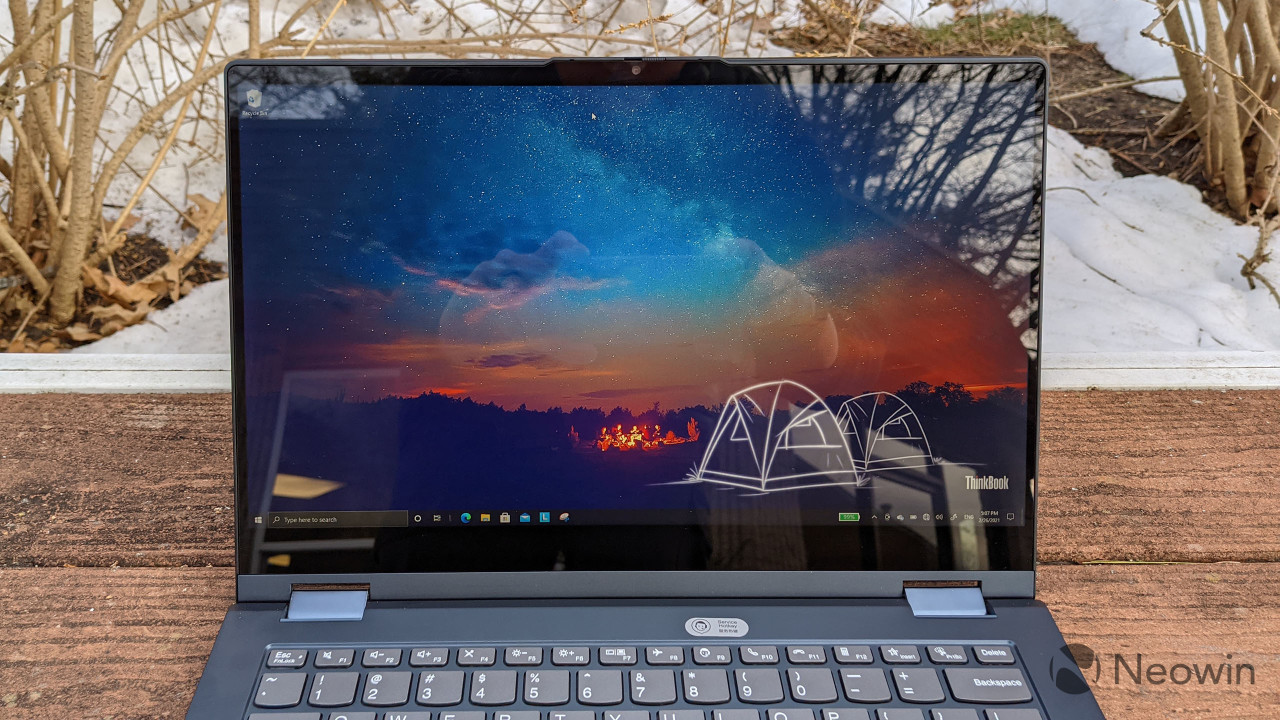 Unfortunately, the webcam is just 720p instead of 1080p. That's something that I'm going to start calling out more often in reviews, since working from home has become so important to so many of us. 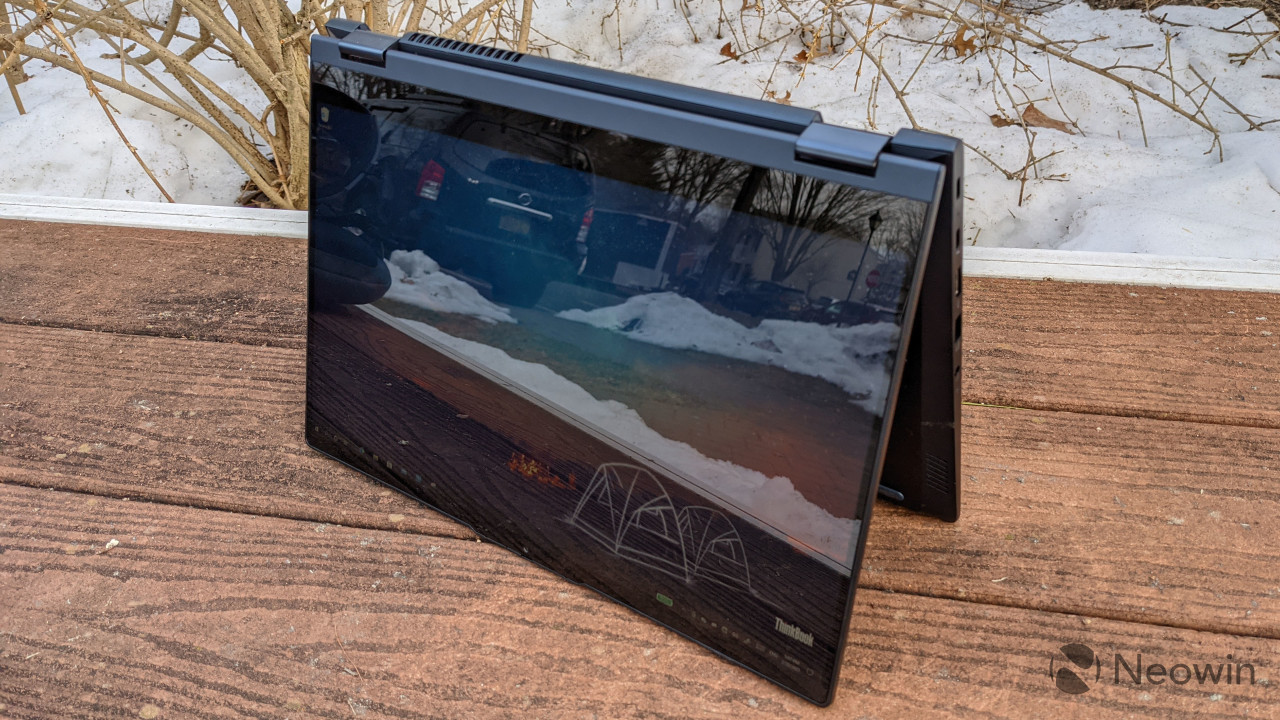 And of course, it's a convertible, so that means that you can put it in tent mode, tablet mode, presentation mode, and laptop mode. You can see it in tent mode in the image above, and that's great for watching movies or even playing some PC games with a wireless controller. 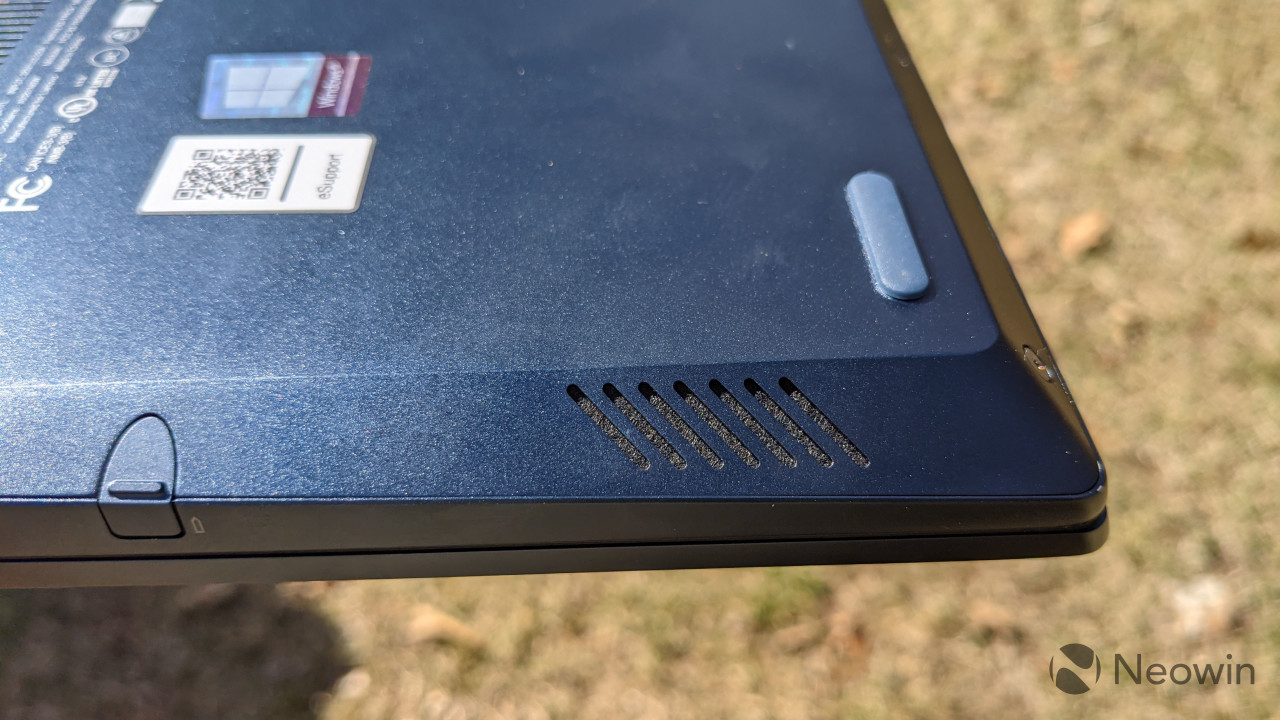 The ThinkBook 14s Yoga has dual 2W Harman speakers with Dolby Audio, and they're placed on the bottom of the laptop. The sound quality is very good, for everything from listening to music to video calls. Volume is pretty decent as well, and should hold its own with a fair amount of background noise.

As always, Lenovo produced an excellent, backlit keyboard. That's another thing that lives on from ThinkPads. It's comfortable, accurate, and precise. Personally, I sometimes even prefer ThinkBook keyboards over ThinkPad ones. 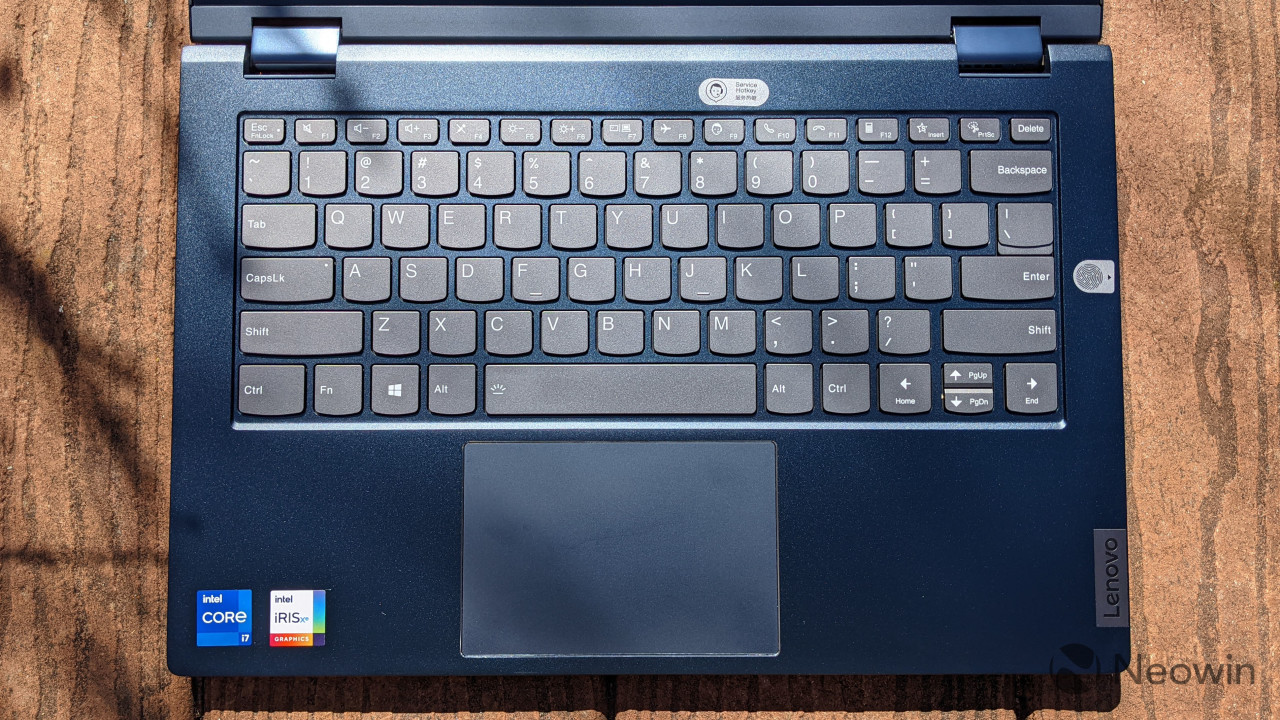 It also ditches some of the legacy components of ThinkPads, such as the TrackPoint. Yes, the TrackPoint is that red nub that's in the middle of ThinkPad keyboards, and it's a relic from the age of when Windows touchpads weren't any good. Frankly, it's a delight to see a business PC from Lenovo that doesn't have a TrackPoint. 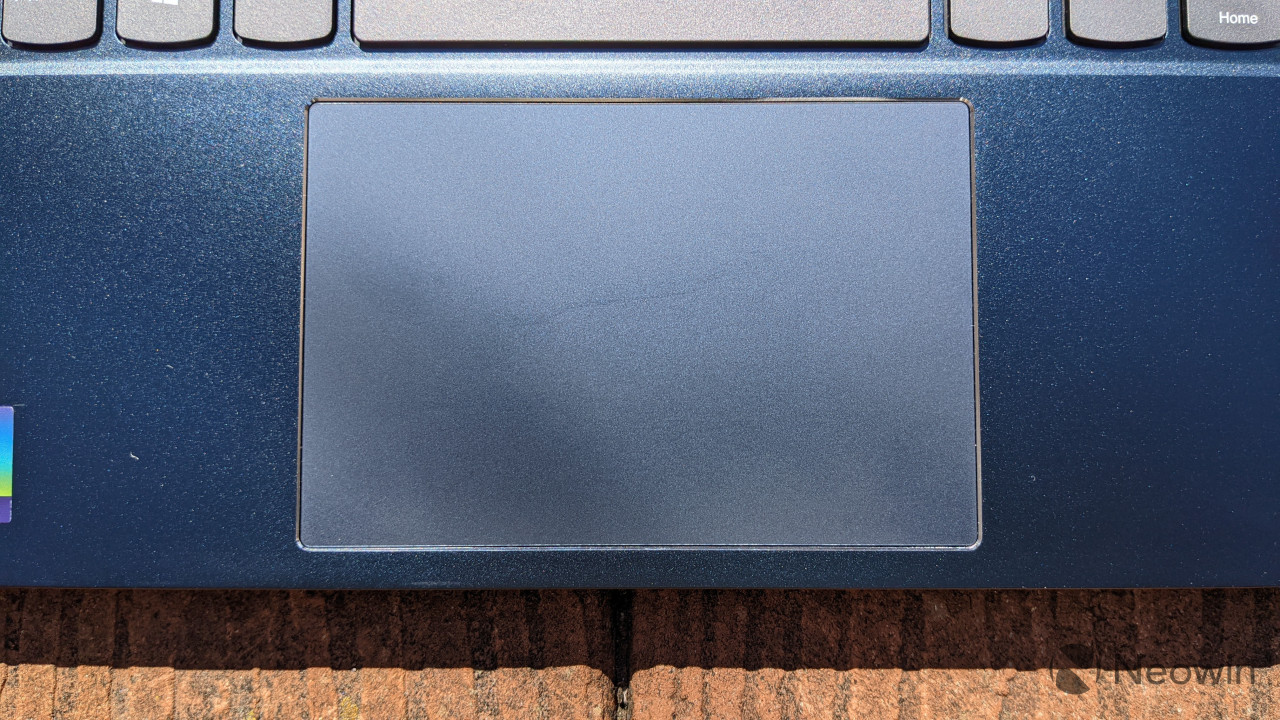 And indeed, modern Windows touchpads are great, as this one, like most, use Microsoft Precision drivers. It's also bigger than the touchpad that you'll find on a ThinkPad, thanks to how there are no physical buttons above it. While I do enjoy the physical buttons, those are mainly designed for use with the TrackPoint.

That's about it for the keyboard and touchpad though. This part is all pretty straightforward, and that's a good thing.

The ThinkBook 14s Yoga that Lenovo sent me includes an Intel Core i7-1165G7, 16GB RAM, and 512GB of storage. It's a pretty impressive configuration for just over a thousand dollars, and it does come with Thunderbolt 4.

The Core i7-1165G7 is from Intel's 11th-generation 'Tiger Lake' family, and it comes with Iris Xe graphics. Indeed, Intel has been focusing on its integrated graphics for the last couple of generations now, and what it's come up with is pretty impressive. I mentioned gaming while this is in tent mode, and you can totally do that. If you want to go ahead and play Forza Horizon 4 on medium settings, you can play all you want.

It can do some video editing too, although I wouldn't go beyond 4K 30fps. The point is that for a machine with integrated graphics, this thing comes with some power, and it has the RAM to back it up.

Battery life is pretty decent too, coming in at around seven hours of regular work, including work in the Edge browser, OneNote, Slack, a Zoom video meeting, Skype, some light Photoshop work, and some light Illustrator work. This was with the power slider at one notch above battery saver and the screen at about 50% brightness. You'll notice that when I track this stuff, the screen isn't always at the same percentage of brightness, and that's because I set it to a comfortable level. This is a dim display to begin with, so the percentage I used is higher than normal.

As you can see, Intel's 11th-generation processors are legit. That's compared to two last-gen PCs though, but you can see that Tiger Lake offers a significant jump over Comet Lake, the 14nm processor that was included in business laptops that had 10th-generation chips.

One other thing that I'll point out for this section is that I'd really have liked it if there was a 4G LTE option, but there isn't. That's something that's a staple in ThinkPad products, and I wish we saw it on ThinkBooks.

The Lenovo ThinkBook 14s Yoga is a phenomenal convertible, even though it's a pretty straightforward product. It's the first ThinkBook convertible, and like I said earlier, I feel like it takes the best from ThinkPad convertibles. 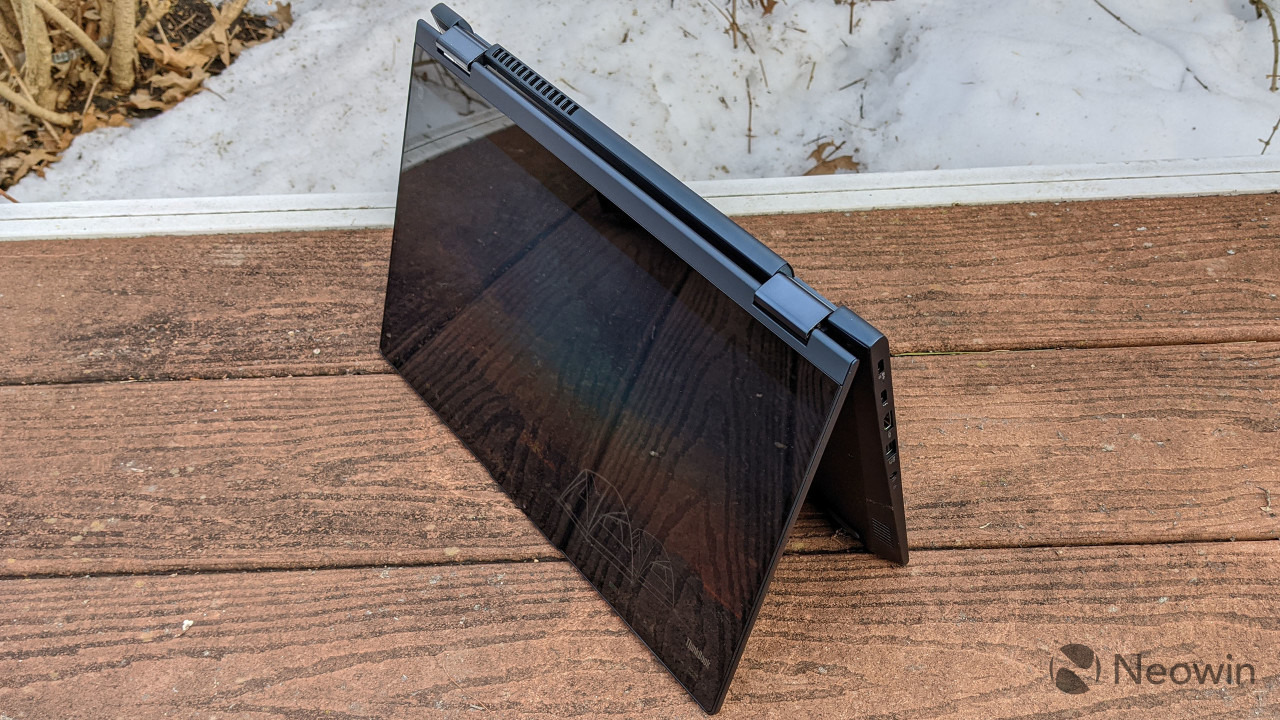 It's not perfect though, nor would you expect it to be at just over a thousand dollars, an awesome price point for something this good. But the screen could definitely be brighter, and I'd really have liked to see a port upgrade on this thing, with two Thunderbolt 4 ports, USB 3.2 Gen 2, and HDMI 2.0. Also, a 1080p webcam would be nice.

What you do get here is a sexy two-tone design with the new Abyss Blue color, a best-in-class keyboard, a pen garage, a convertible form factor, and a ton of performance, memory, and storage for a great price. If you want to check it out, you can find it on Newegg here.