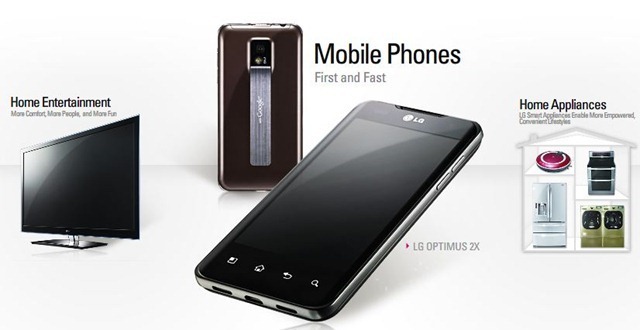 The LG press conference kicked off by showing their lineup of new SmartTVs. The SmartTV network is available for any HDTV, through a small external box that allows you to download apps, browse for search terms, online streaming content, including Hulu and Netflix and a ton of apps on their app store on launch. SmartTV allows anyone to connect to the Internet through WiFi, share content in your home network, and best of all, will be easily connectable.

LG announced a new 3D cinema lineup, including a 180-degree viewing 3DTV, included with four glasses, so your friends and family can enjoy 3D from anywhere in the room. LG is completing the experience by introducing a 3D surround sound speaker system, which isn't just a marketing term, but fills the room with sound in an experience "like nothing else." The new lineup of Blu-ray players includes a portable version, allowing you to get high-definition video playback anywhere with a compatible HDTV.

LG will be launching the Optimus 2X, a 1Ghz smartphone, with NOVA display - the brightest display ever on a phone - all running Android OS. The Optimus 2X will have a 15% better battery life, allowing you to enjoy your phone a little bit longer.

Smart technologies will also be branching out to appliances later this year, with smart dishwashers, fridges, and even ovens. You will be able to monitor and control your appliances from your mobile smartphone; incase you accidentally leave something on or need to start your laundry during the day.