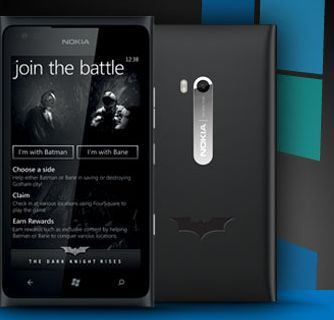 A couple of days ago, we reported that some UK residents would soon be able to purchase a special limited edition of the Nokia Lumia 900 that's designed to promote the upcoming Batman film The Dark Knight Rises. Now the wireless retailer Phones 4U has revealed more details about this limited edition smartphone.

The Phones 4U page reveals that pre-orders for The Dark Knight Rises edition are being taken now and that it will go on sale in the retailer's stores on June 1st. A post on the company's Twitter page said that the phone can be bought SIM free for £599.95 or for free in exchange for a £31 a month contract.

The case of the Lumia 900 limited edition will come with a laser etched Batman logo. It will also come with some exclusive software content, including wallpaper, trailers and ringtones, tied into the movie. Finally, people who purchase either the limited edition or the regular Lumia 900 in June from Phones 4U will receive two free tickets to see The Dark Knight Rises and be entered into a contest to win a trip to the film's premiere.

While this limited edition is exclusive to Phones 4U customers, there's no word if the US or any other country will receive a chance to purchase this version of the Lumia 900.

Via: WMPoweruser.com
Source: Phones 4U | Image via Nokia