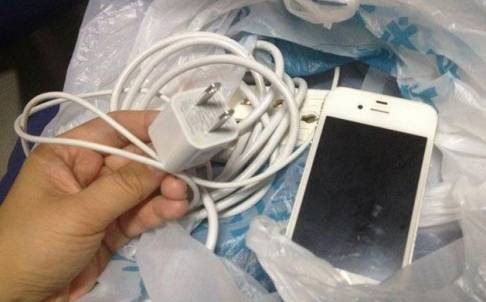 The charger above is allegedly responsible for electrocuting a man into a coma.

A man in China has been left in a serious but stable condition after connecting his iPhone 4 to a counterfeit charger in China. Wu Jian Tong, 30, called for help moments after he plugged his phone in, and his hand clamped shut on the device which was electrocuting him. He fell unconscious shortly after, and was resuscitated by ambulance crews.

The Independent reports that Wu called out "I'm getting shocked" before his sister disconnected the phone. She recounted:

I then felt needle-like pains on my fingertips. The current was running from my finger, through to my arm and body, and to the foot.

It has been circulating that the charger used was in fact counterfeit, which may have led to the incident, as cheaply made electronics often do not pass the same safety standards as the official counterparts and may not be properly insulated. The humidity inside the building may also have been to blame.

Last week, in a separate event, a Chinese woman was killed when she answered a phone call while her iPhone was charging. This raised concerns about possible faults with the iPhone's charger, but Apple have responded with strong cautions about using unofficial chargers:

Our customers' safety is very important to us and we have carefully designed all Apple products to meet government safety standards. We recommend our customers only purchase Apple products from Apple or authorized Apple resellers.

They have also announced the launch of an investigation, to ensure safety in the future:

We are deeply saddened to learn of this tragic incident and offer our condolences to the Ma family. We will fully investigate and cooperate with authorities in this matter.

These reports can easily be put down to scaremongering, and those using reliable, safety assured products should not worry about these incidents. If purchasing any electronics online or from illegitimate sources, however, users should be very wary about their safety, and preferably invest a little extra money in buying from trustworthy companies.

Source: The Independent | Image via News.cn