A little while ago I was contacted by Elephone offering me a smartwatch which focuses more on the 'watch' side of things rather than the smarts. A few weeks later the Elephone W2 arrived at my doorstep, and it wasn't a let down at all. What makes the W2 different from other watches is that it retains the classic quartz clock movement, but still embeds standard smartwatch features like sleep monitoring and step counting.

The case body and the buttons and dial to the right of the case is made of stainless steel which is polished at certain points, and the glass on the watch is actually sapphire - as claimed by Elephone - so it should be fairly scratch resistant. The watch face itself is white and unnumbered, and instead uses metal lines to indicate the clock divisions (i.e different hours). Just under the 12th-hour marking is a small LED which is activated by pressing the top most button on the watch: once pressed, it gives an indication (through four different flashes) of what the battery level is at. 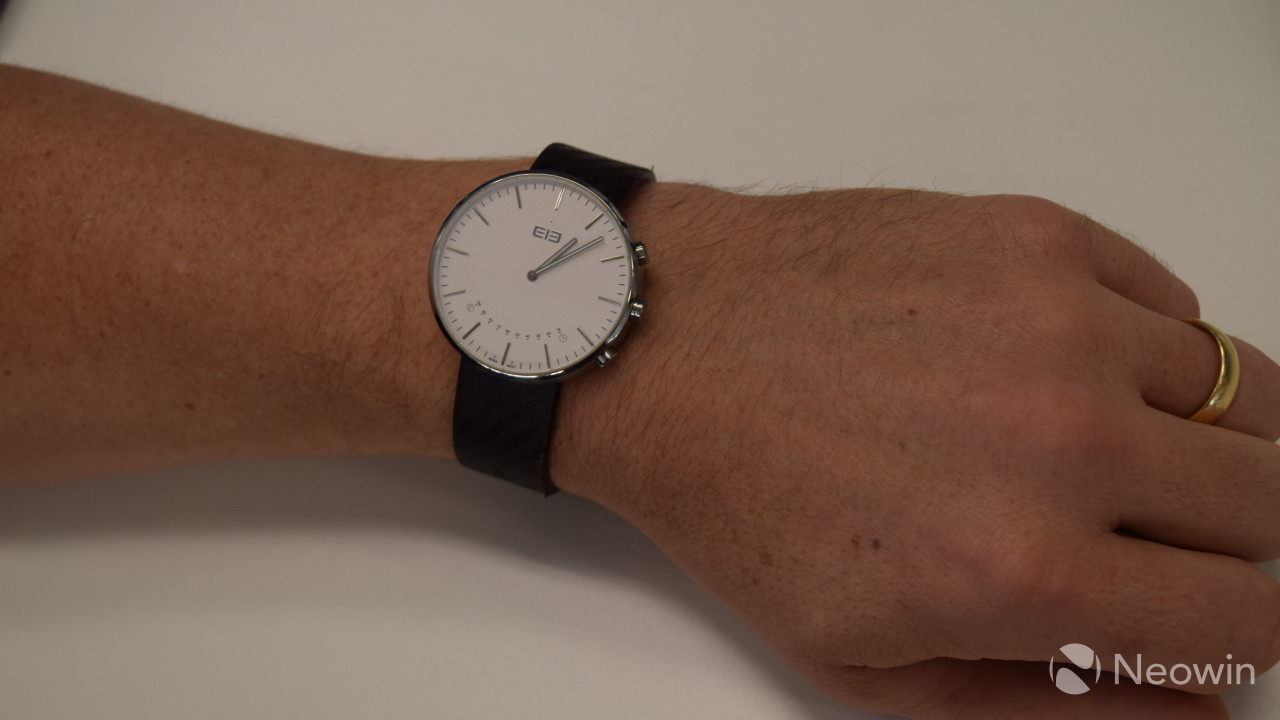 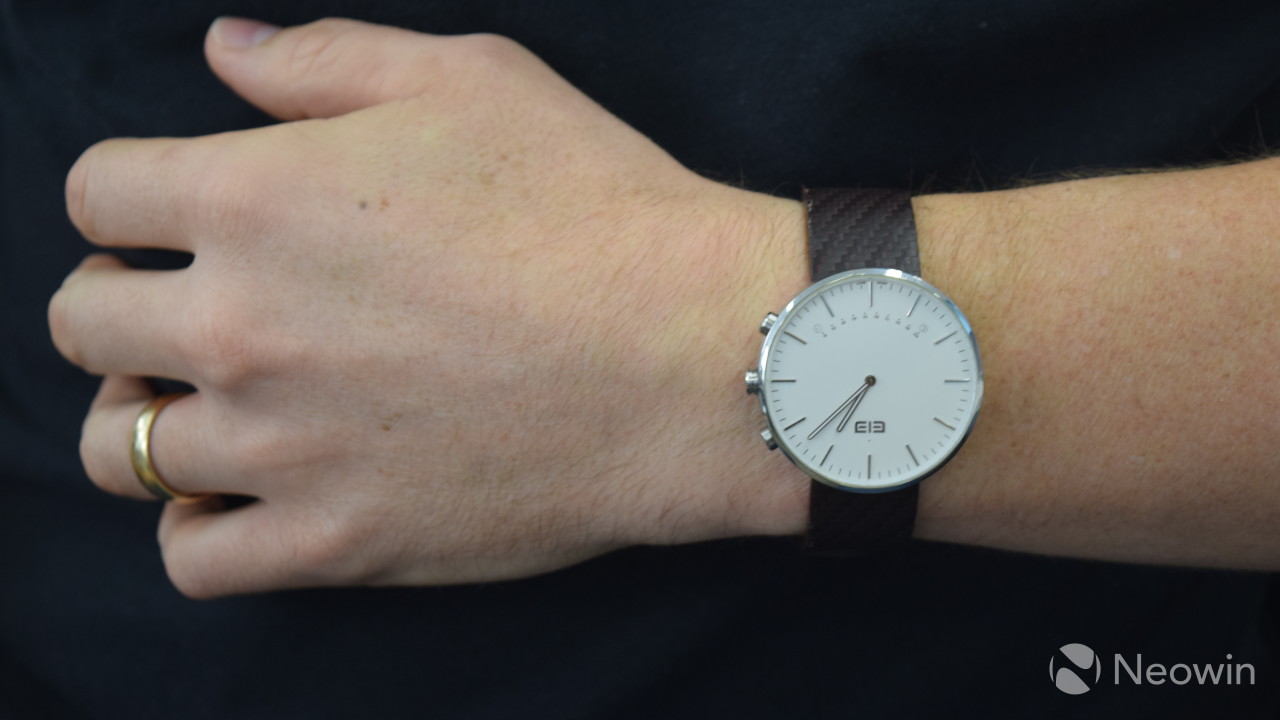 The watch measures in at 41mm across with a depth of 10mm.

Immediately under that is a chrome Elephone logo, and right at the bottom is a long strip of ten individual LEDs that begin around the 4:20 mark and end around the 8:40 mark on the watch. They're marked 10 through to 100, and under the left most LED is a phone icon and under the right most LED is a clock icon. The phone icon is used to indicate that the wearer has an incoming call while clock icon is used for alarms. 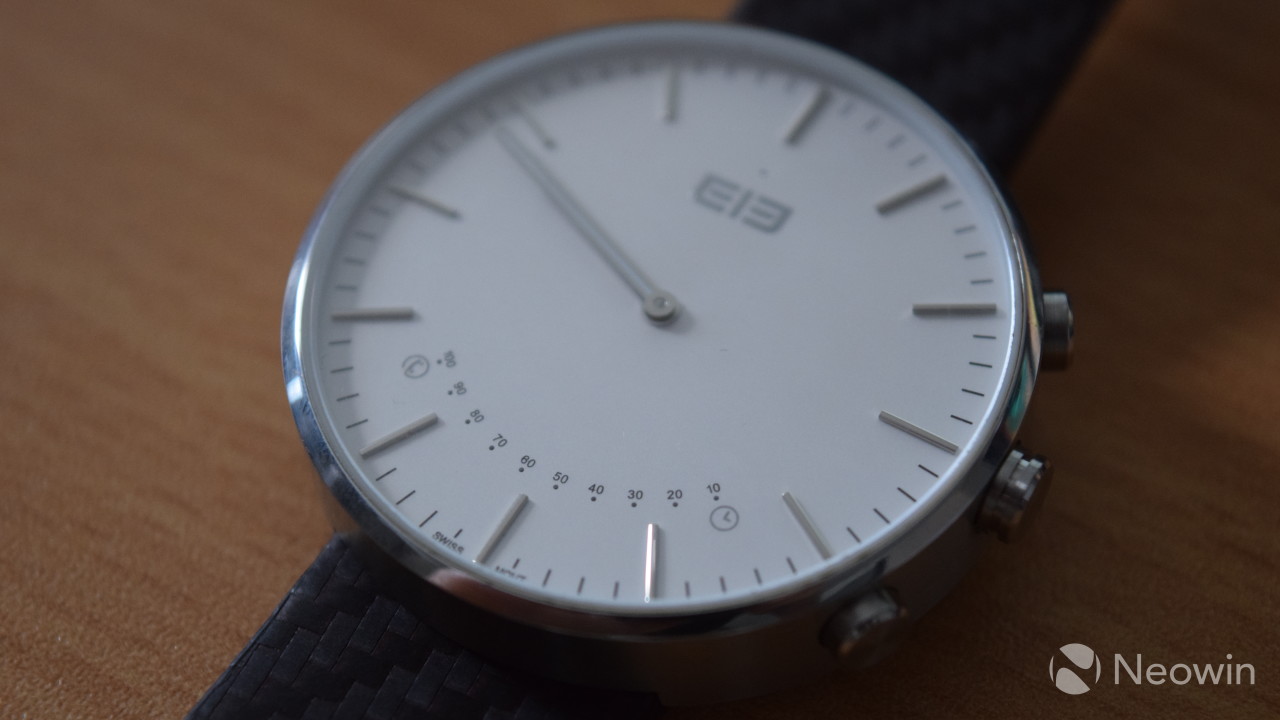 The hands of the watch are both metal with strips of luminent on them.

The rear of the watch case has four small flathead screws which remove the panel: this is needed for replacing the battery (we'll get into this later). The watch comes with leather straps that are fairly easy to put on and remove due to a small mechanism in the spring bar. The straps are marked 'genuine leather' and, from what I've found, this is true. On the very top layer of the leather, Elephone has bonded some sort of design print but it's extremely thin and prone to easily being damaged. The straps have some sort of plastic coating on the very top which is supposed to keep that layer slightly protected, but it just adds to the fraying. This is a terrible oversight on Elephone's part.

The watch comes in two different variations, one "for women" with a rose gold tone and curved edges and one "for men" which is pictured in the photos in this review. 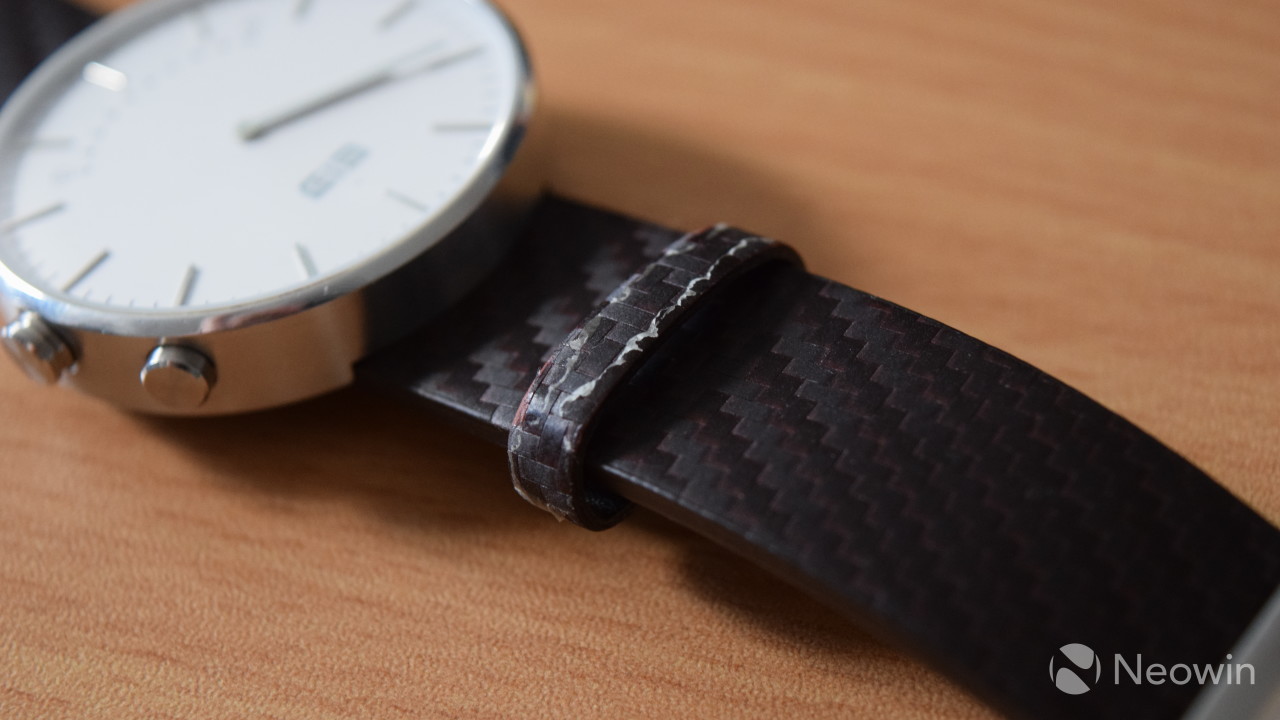 The Elephone W2 has a tri-accelerometer and uses the data captured from that sensor - much like the Mi Band, FitBit or similar trackers - to count your steps. The watch itself does not constantly sync the data and requires you to open the app in order to sync the data across, although the watch is still able to give you an idea of where you're up to against your goal for the day through LED lights on the watch face. 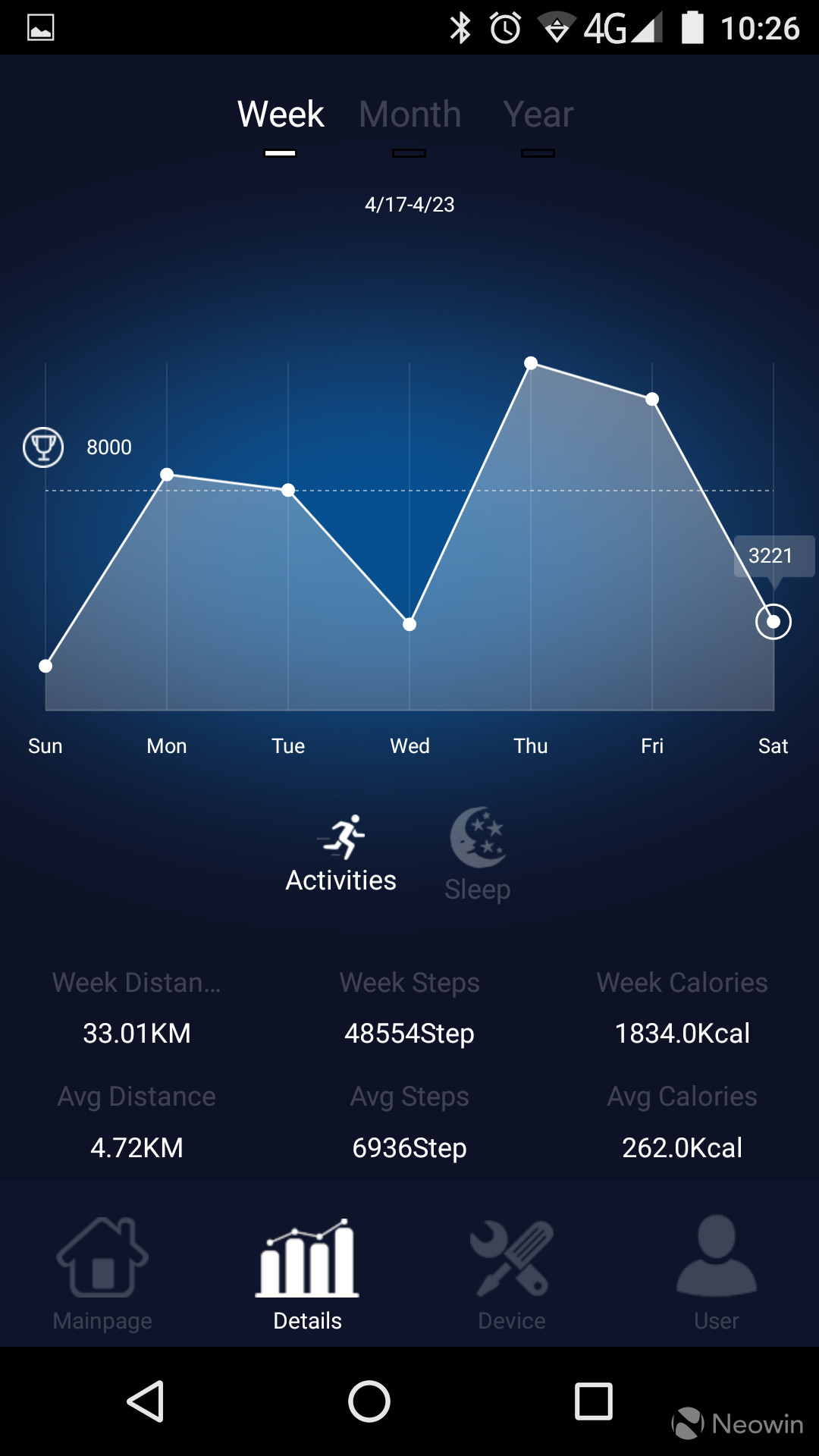 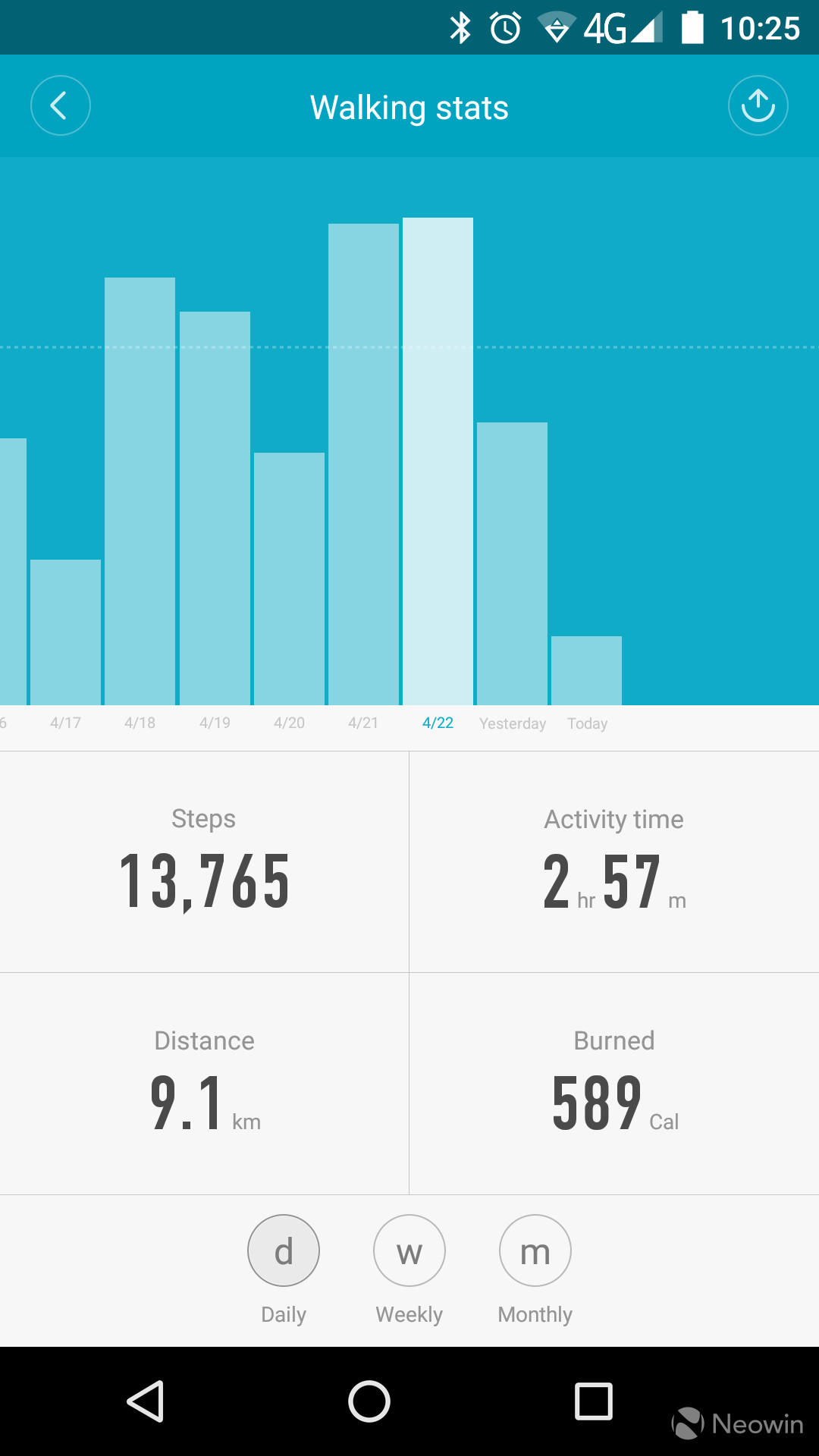 Based on the data it estimates the distance you've walked as well as a rough idea of how many calories you may have burned. When compared against apps for other wearables I noticed a clear lack of things like running modes, route tracking or similar. It does, however, provide a 'sedentary alert' for fitness motivation which I cover later on in the review.

The accuracy is somewhat on par with the Mi Band, although there is about a 10% discrepancy with the Mi Band recording more steps. The sleep times match up a lot closer, however. 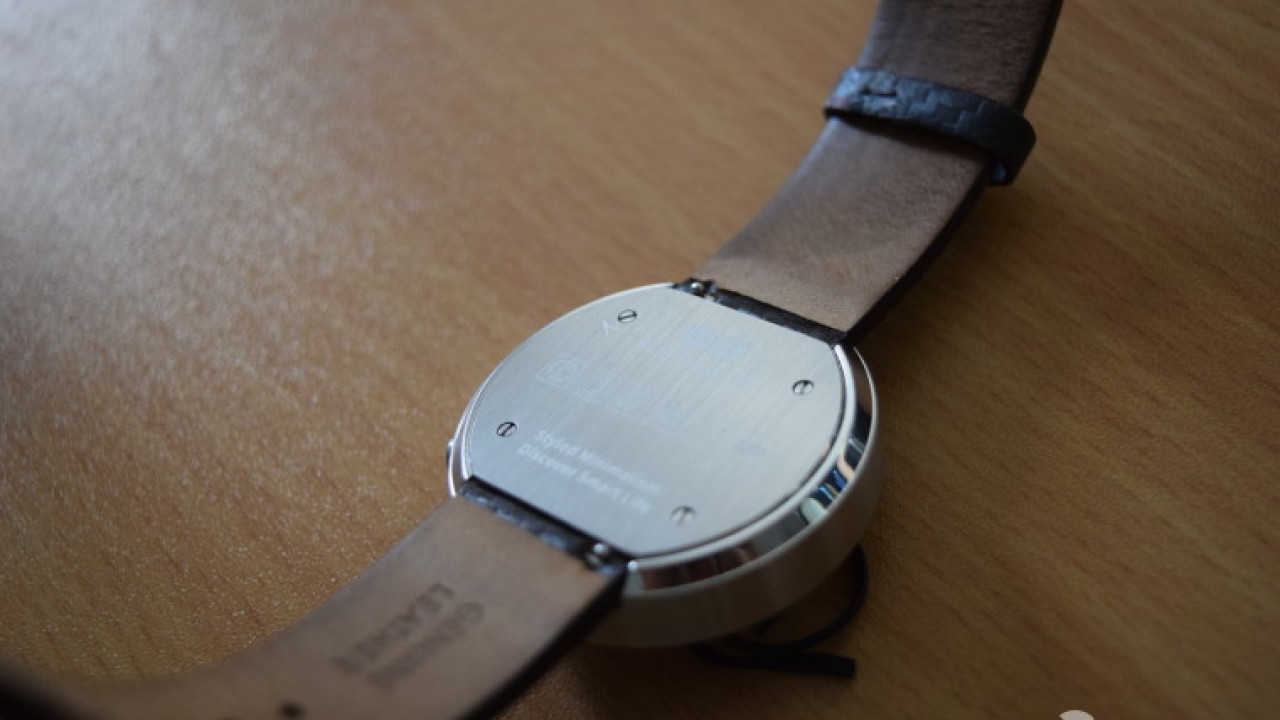 The W2 allows for passive sleep monitoring, meaning that based on the time of day and level of activity it's able to automatically detect when you've fallen asleep (and when you've woken up) with a rough degree of accuracy. 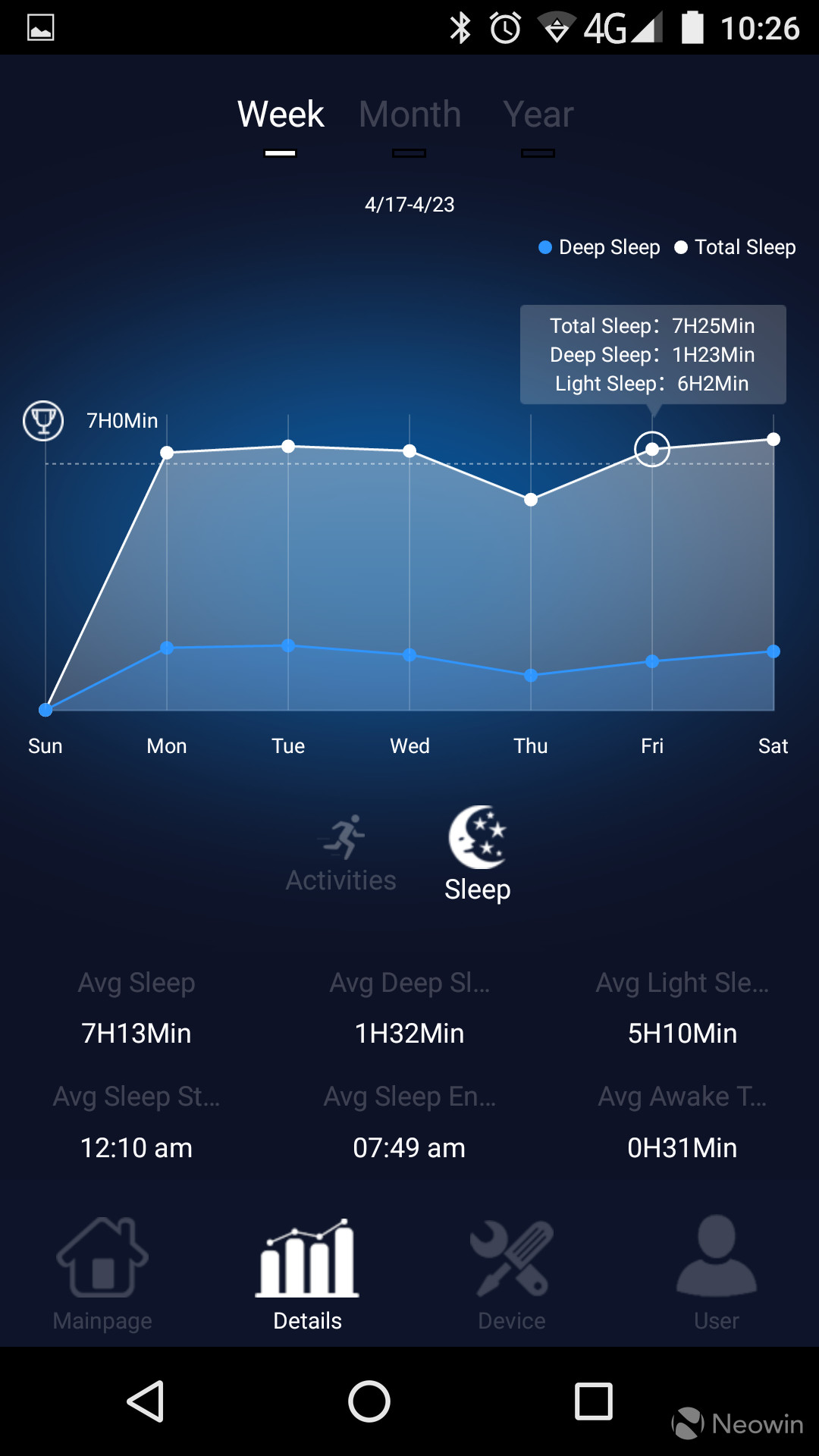 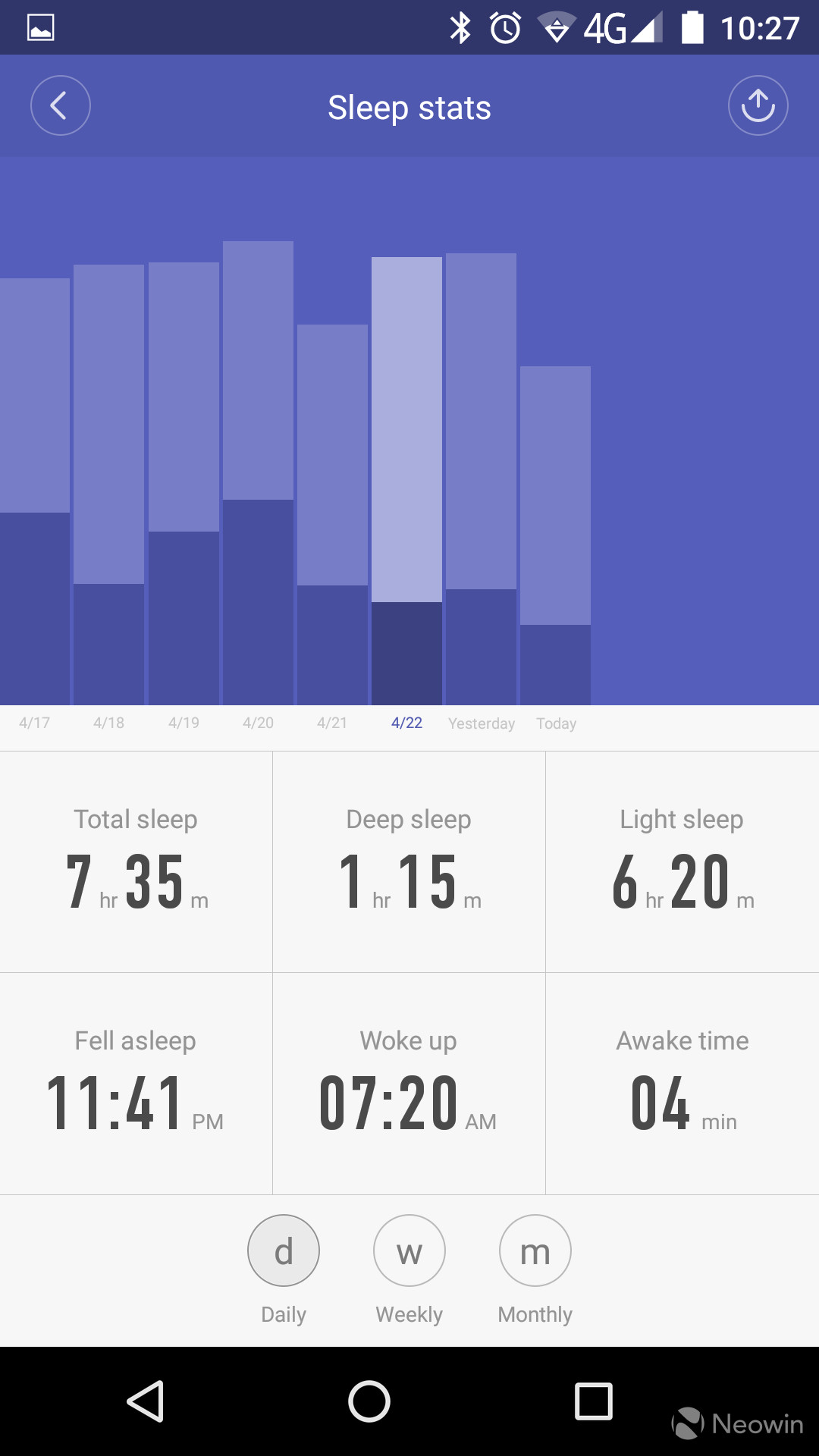 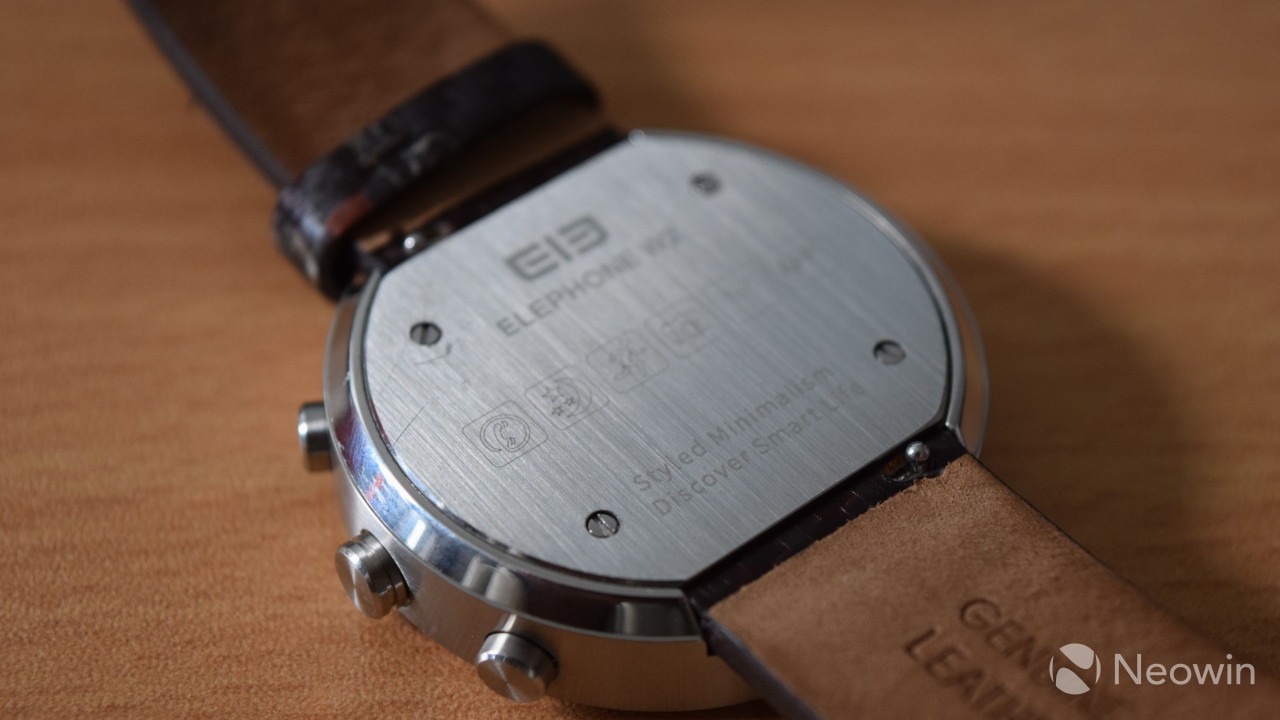 The watch allows for two different types of alarms: a "sedentary" alert and a standard user-set time-specific alarm. Speaking on the former, the watch would look out for extended periods of little activity and alert you to get up and get moving. On the latter, you can set silent alarms where the watch will wake you up or notify you through vibration rather than using the audio-based alarm on your phone.

This is an Elephone claim which I haven't been able to test: you're apparently able to set it up so that it vibrates (after a user-set delay) when you get a phone call.

I've tried to make this work on Elephone's current flagship phone (i.e to ensure that there are no compatibility issues) but I can't make it happen. Even though it's enabled and all the permissions seem to be set right, it has never actually vibrated, flashed or given any sort of indication that I'm receiving a call.

One day after writing this I finally managed to make it work! I was sitting down and felt a soft vibration on my wrist, so I glanced over at my watch and, lo and behold, I was getting a call notification. I'm not exactly sure why it has only ever worked the one time, but I assume it might be due to a notification access clash with my Mi Band? Well, I hope so, anyway. 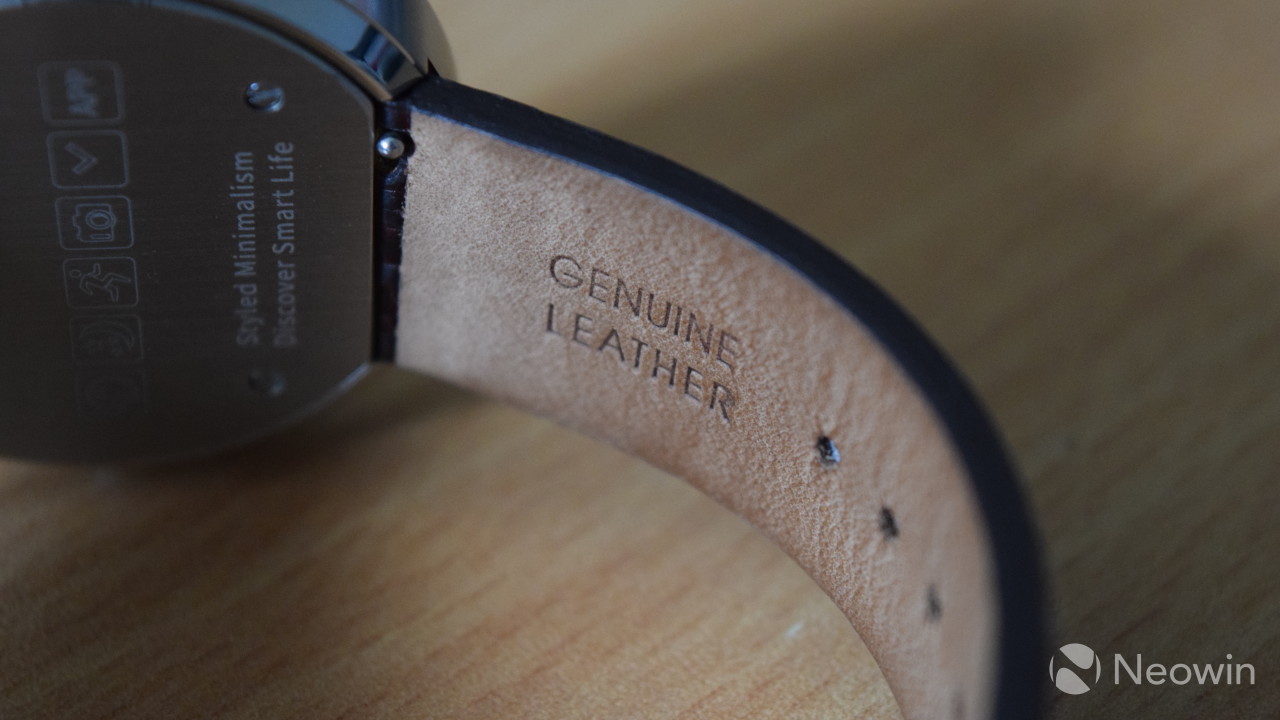 The battery life on the Elephone W2 is a double edged sword. It's double edged because the battery lasts for more than three months, but it can't be recharged: it comes with a screwdriver and two replacement coin batteries, and you have to physically replace the battery when it dies.

There are four flathead screws on the back of the watch case that needs to be taken out before replacing and recapping the watch, and in my experience, it was fairly difficult to do. Getting the rear plate back on fitting snug and sitting correctly resulted in accidentally scratching the back of the watch several times with the screwdriver. 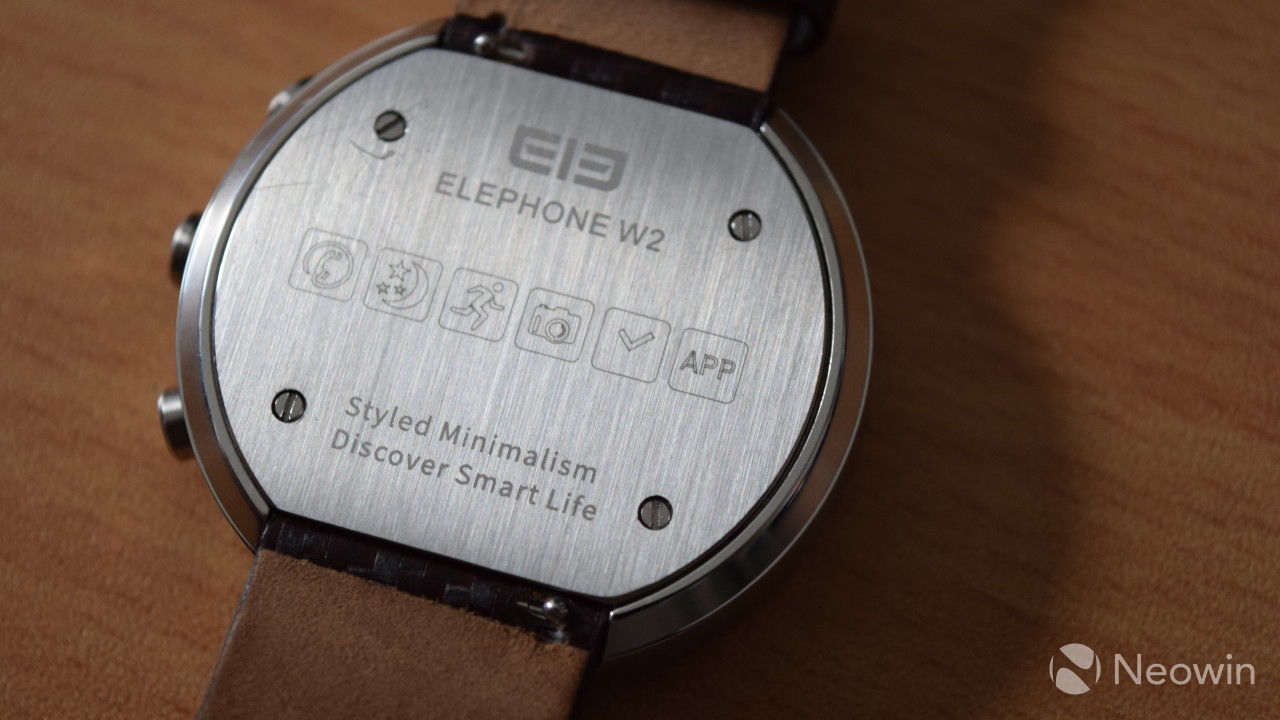 If I had to pick on one thing, it would be this. The companion app for the W2 tangos between ugly and hideous, and limbo's around unusable. Things don't scale right, various parts of the app are broken, navigating around the app is confusing (I've had this thing for a month or two now and I still don't know how to fully use the app). Syncing sometimes won't work, and when it does try to sync, it takes an excessively long time. All the data you'd want is there, and it's not too badly graphed, but it looks and feels like a clunky university student's project rather than that of an established electronics manufacturer. I'm hoping that this app will be updated with something slightly more elegant in the future. 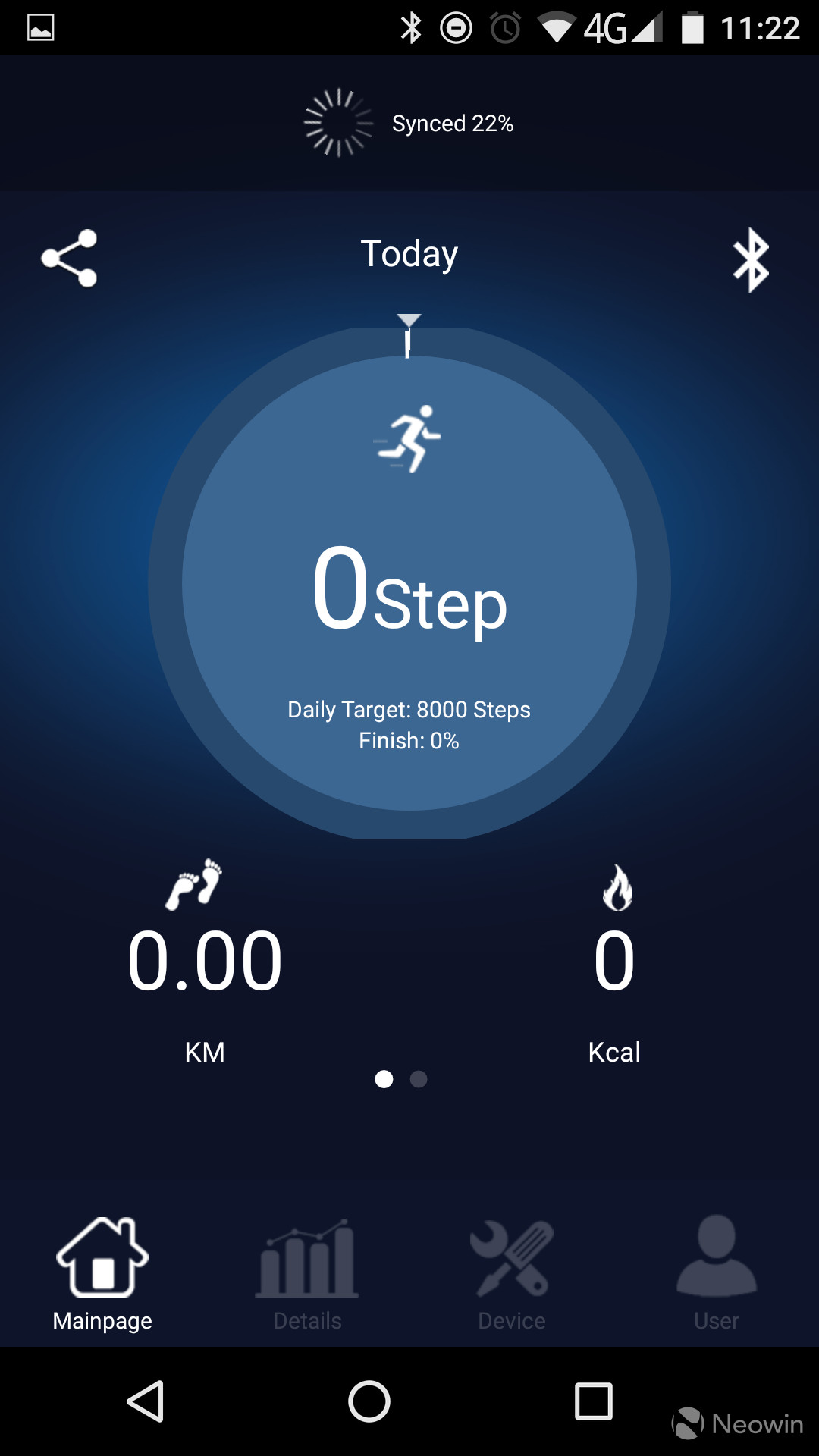 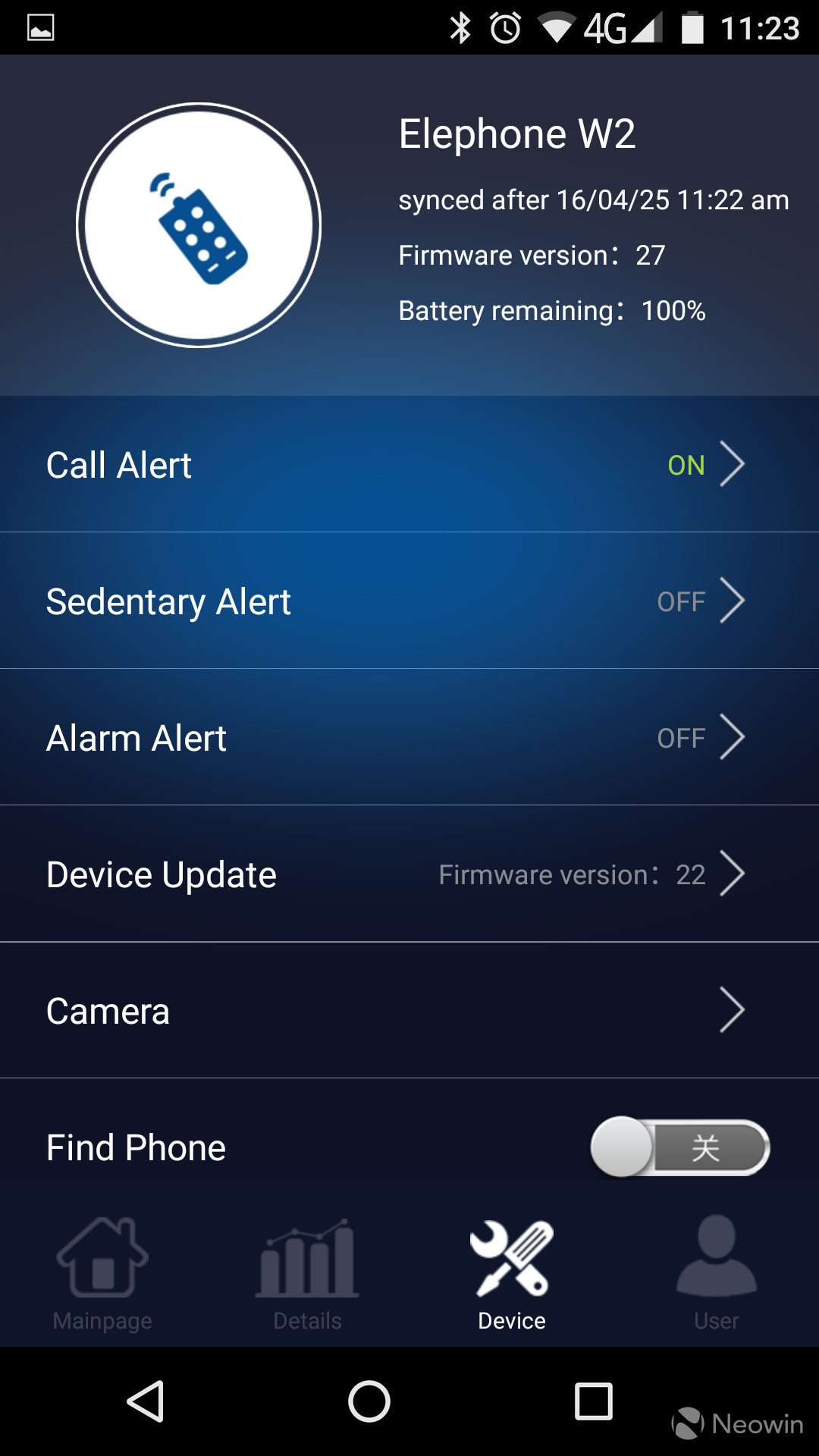 One 'feature' in the app that I didn't mention in the 'Feature' list earlier is the ability to use the watch to take photos. Inside the companion app is an option called 'Camera' which opens up a built-in camera app, through which you can just press any button on the watch and it will take a photo. The catch is that it defaults to the rear-camera in pitch black, and the only way to get it to work is to change to the front-camera and take a photo. At this point the front-facing camera will be pitch black, and you change to the rear-camera and it would finally be working. If you were able to make sense of that, then it sounds nuts right? The nutty part is the >1 second lag between pressing the button on the watch to it actually taking the photo. Yeah. 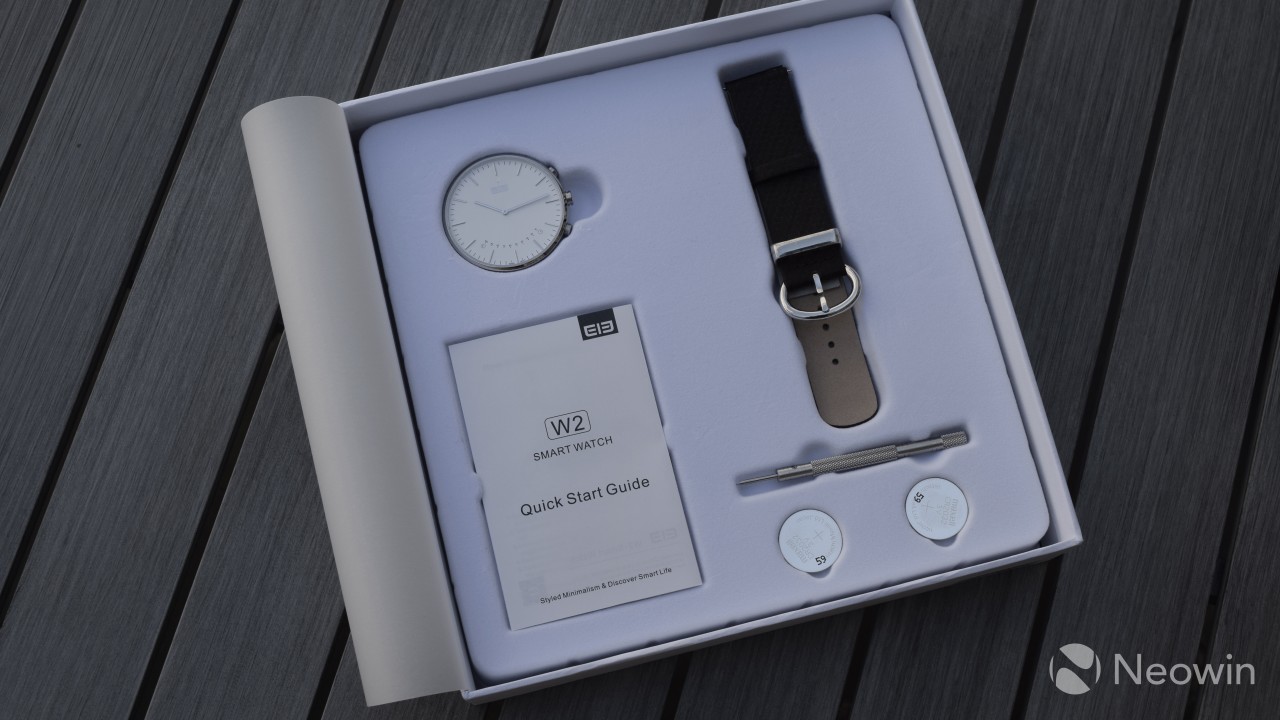 The Elephone W2 has a few flaws but isn't a bad watch at all. It's Elephone's first watch (as far as I'm aware) and the concept of mixing quartz time keeping with 'smart' features is a little-explored area. That said, there are certain areas where you can't excuse the oversights, and those include the cheap quality of the band and the hideous companion app. 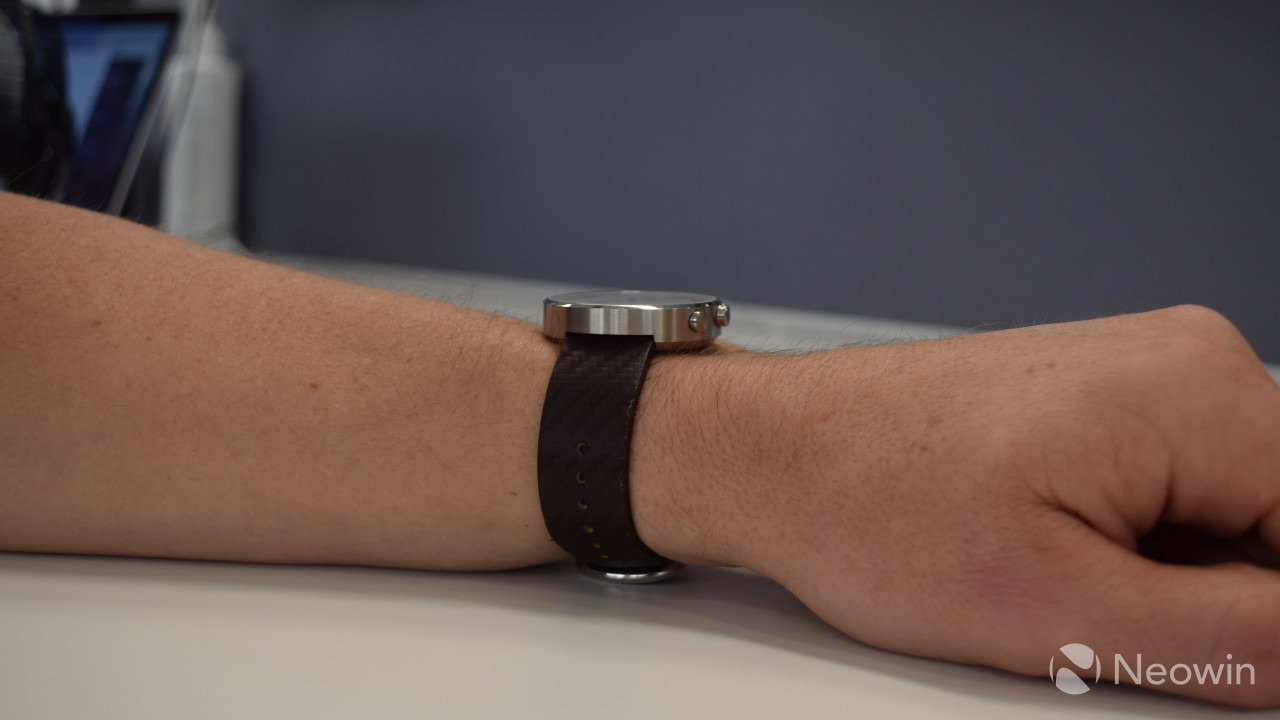 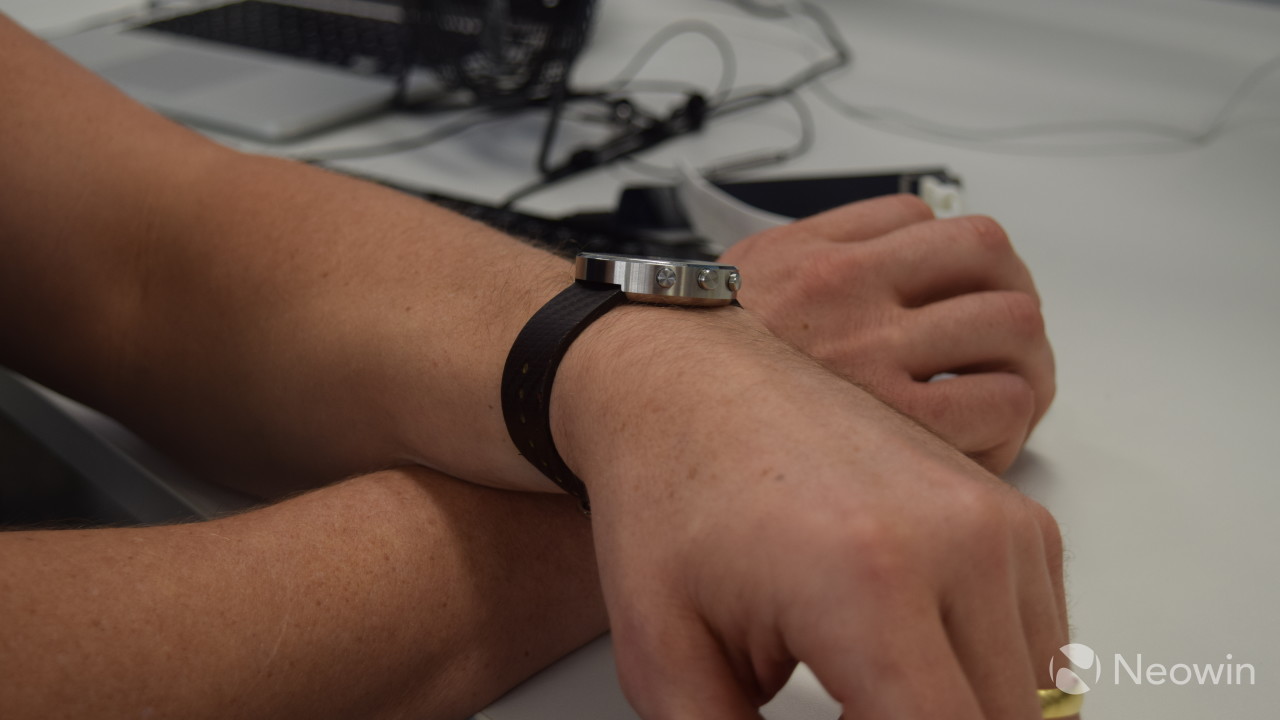 Google has done most of the work regarding app design on Android by writing an extremely detailed and cohesive instruction set for Material design, as well as supplying everything from templates through to icons and fonts through to Adobe color swatches. There are dozens upon dozens of tutorials, third-party packages, and hundreds of hours worth of video talking about design. There is no excuse for app design - not in 2016. So I'm not exactly sure why Elephone pressed on with their own design, ignoring the existing body of work out there, and ended up with what they have now.

I'm going to give it a 7/10, with the long battery life, price and physical design making up for a lot of the other shortfalls. If you're after a wearable in the form of a quartz watch, this is it. If not for anything other than the battery life.