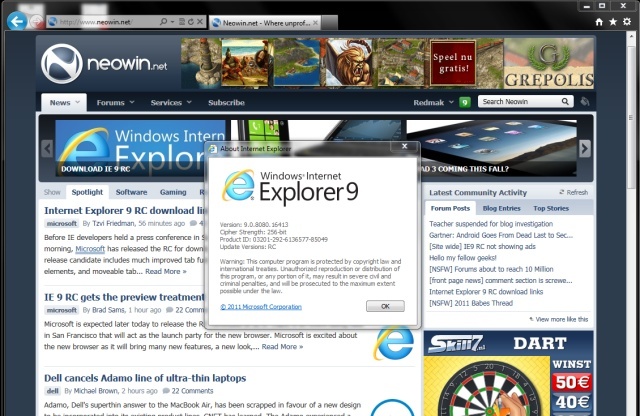 Microsoft is getting ever closer to releasing the final version of the much anticipated Internet Explorer 9. After its release candidate launch on Feb 10, the next traditional step for Microsoft will be to release an RTM-Escrow version of the software. RTM-Escrow means that development is no longer occurring and the project officially goes into testing mode, with external beta testers joining the fray to weed out any remaining bugs in the final product.

According to @hb860 in a Twitter post, the build number of the RTM-Escrow is 9.0.8110.16409. Microsoft typically releases the full RTM less than a month after the RTM-Escrow build, so it’s safe to assume that we’ll be seeing the next major update to the project in the near future.

The RC version of IE9 has its fans and detractors. While the RC has been downloaded 36 million times in less than a month, there are many who feel that the product is nowhere near the state it needs to be in to warrant a final release. The final stages of the project should fix a lot of the issues that the skeptics are worrying about. There won’t be any new features in subsequent builds, but there are still bugs to be found and squashed, and Microsoft will hopefully release a final version that will be able to stop browsers like Google Chrome and Firefox from taking more of browser market share from the once-dominant software.