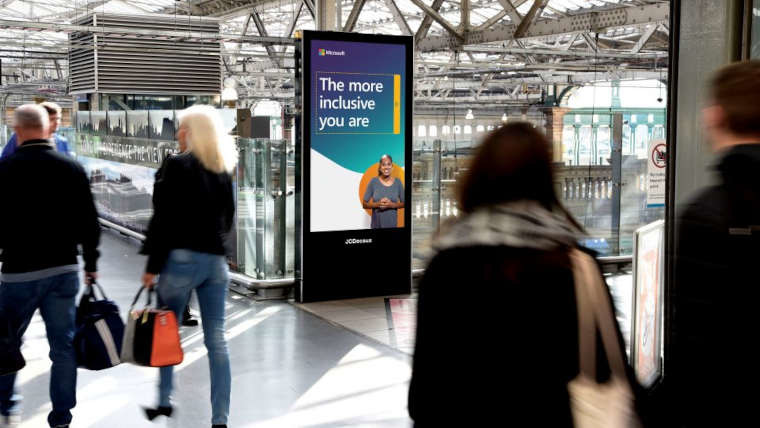 Microsoft has announced that it has launched the first-ever national digital billboard campaign in the UK that includes British Sign Language (BSL). The company said it began the campaign in order to highlight the importance of accessibility in driving innovation. The billboards are now on display in several of the country’s biggest railway stations.

The railway stations where the billboards are on display include Reading, Brighton, Waterloo, Birmingham New Street, Manchester Piccadilly, Liverpool Lime Street, Leeds and Edinburgh Waverley. Each billboard displays a 10-second film with an interpreter signing “The more inclusive you are, the more innovative you can be. Together we can create a better and more accessible world for everyone.” For those who don’t understand BSL, the translation is in writing next to the interpreter.

For those seeing this post or the billboards at railway stations, the question “What can I do?” may come to mind. Microsoft has launched a new accessibility website that contains lots of resources for companies that want to make themselves more inclusive for all people. It includes information on hiring practices, digital skills, growing a diverse culture, creating accessible solutions, accessibility tools, case studies and tips and tricks for making these efforts a success.

“Innovation comes from diversity of thought and greater diversity can be fostered through building a culture of inclusion and accessibility. Microsoft places great focus on this and this campaign showcases the role technology plays in improving access for underserved populations; sharing our commitment to ensure every person has access to the technology, skills, and opportunity to pursue jobs in a changing economy.”

According to the firm, 151,000 people in the UK communicate using British Sign Language. With a population of 67,000,000, more than a few will find the translation handy.