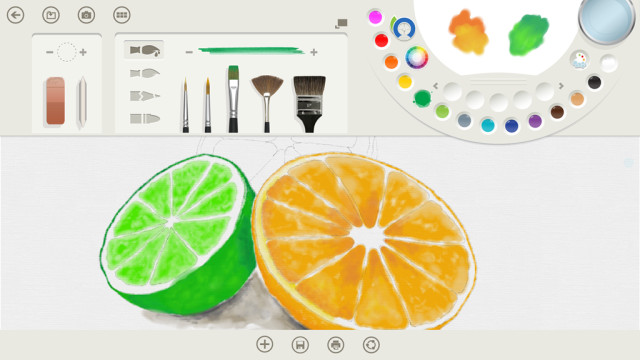 Microsoft recently launched a port of its Windows 8 drawing app Fresh Paint for Windows Phone 8 and today the company announced that it has released an updated Fresh Paint app for the people who are using the public preview version of Windows 8.1.

In a blog post, Microsoft said that the Windows 8.1 preview version of the app adds a new watercolor medium alongside the previous oil color paint. Microsoft states, "Like the oil paint medium in Fresh Paint, the colors can mix and blend, but, like real watercolors, they will bleed into your canvas or paper to create vibrant works of art."

The Windows 8.1 version also adds a number of new simulated brushes along with more photo filters. It also allows any artwork created in Fresh Paint to be pinned to the Windows 8.1 Start screen which is designed to let users resume their projects at a faster pace. The new version incorporates Snap view for the first time, which lets users view their work while using other Windows 8.1 apps at the same time. Finally, art made from the app can also be incorporated into the Windows 8.1 Lock screen.

Just a reminder: This new Fresh Paint app version is for Windows 8.1 preview users only. The app is available from the Windows Store but at the moment it is propagating through all of the store's regions so it may not be available for all Windows 8.1 users immediately.